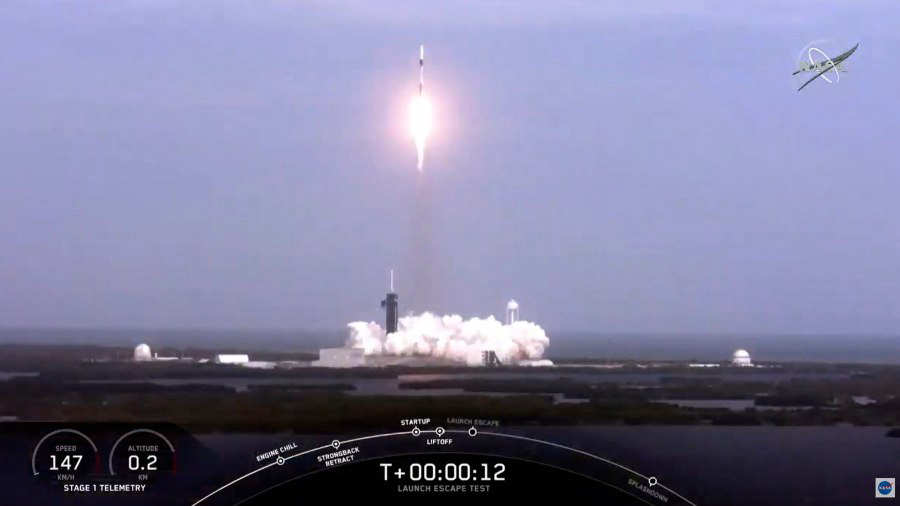 This test is one of the “necessary” that the company lacked to launch the first commercial flights to space with humans aboard its Crew Dragon capsule.

The American aerospace company SpaceX destroyed a Falcon 9 rocket on Sunday after pitch it in Cape Canaveral, Florida, United States, in the last of the tests he performs before executing a flight with astronauts that would travel inside the docked Crew Dragon capsule.

This abortion test in flight with the Crew Dragon – where NASA astronauts Bob Behnken and Doug Hurley will travel in the near future – is one of the “necessary” that the company founded by tycoon Elon Musk was missing to put underway the first commercial flights to space with humans on board.

The Falcon 9 with the Crew Dragon (also known as Dragon 2) was launched at 10:30 local time (15:30 GMT) from the historic platform 39A at the Kennedy Space Center, the same as the launch of the lunar missions of the program Apollo.

After launch, SpaceX ordered the Crew Dragon abortion system, which separated from the rocket approximately two and a half minutes after the flight began.

Dragon has separated from Falcon 9 and its SuperDraco engines have completed their burn pic.twitter.com/tDhogz1qQ9

Crew Dragon separating from Falcon 9 during today’s test, which verified the spacecraft’s ability to carry astronauts to safety in the unlikely event of an emergency on ascent pic.twitter.com/rxUDPFD0v5

The Crew Dragon deployed four parachutes as it fell on Earth and then plunged into the Atlantic Ocean, off the coast of Florida.

The operation, which was broadcast live by both NASA and SpaceX, could be completed successfully and lasted a total of about ten minutes.

“Unfortunately,” according to the company’s words, the Falcon 9 broke down when it fell over the ocean, after reaching more than 12 miles (19.3 km) on Earth and traveling at 1.5 times the speed of sound.

Spacex He destroyed Intentionally the rocket to test the Crew Dragon abortion system, that is, its ability to safely escape the Falcon 9 in case of failure.

If this test is “passed”, Crew Dragon could be authorized to fly with astronauts in just a few weeks, which will mark the first manned spaceflight mission for NASA in almost a decade.

Since 2011, the year in which NASA completed the launch of its ferries, USA. has had to resort to Russian Soyuz to send astronauts to the International Space Station (ISS), an agreement that paid Moscow about $ 80 million per seat and, incidentally, a cumbersome situation for a very proud power of its space history and having stepped on the moon.

Against Soyuz, with which they still have a contractual relationship, the Crew Dragon, they say, has the advantage that it has been designed from scratch with the most recent scientific advances.

While the Crew Dragon is preparing to transport humans for the first time, this spacecraft continues to make regular trips to the International Space Station that transports cargo under the SpaceX commercial resupply services contract with NASA.

It is currently the only flying spacecraft capable of “returning” significant amounts of cargo to Earth, says the Sapace X website.

In March 2019, this private company launched the Crew Dragon on an unmanned test flight on board. The capsule then reached the ISS with about 180 kilos of supplies inside for astronauts who were in the space station.

The Crew Dragon remained coupled to the space station for five days and then returned to Earth.
With the test done this Sunday, the capsule would be ready to take humans to the IEE.

The Xiaomi Mi 9T for 270 €! At this price, it's worth the cost, especially since there is no offer of reimbursement that comes...
Read more
Technology

A WORLD APART – the closed beta has started

News Assemble Entertainment and Gentlymad are pleased to announce that Endzone: A World Apart is closed beta today Steam started. This will continue until the...
Read more
Technology

The Xiaomi Mi 9T for 270 €! At this price, it's worth the cost, especially since there is no offer of reimbursement that comes...
Read more

Telekom is now offering a smart bracelet for babies. A crazy idea? Of course, most babies can make ends meet without this bracelet, but...
Read more
Load more