Alas, this is not yet a full presentation of the new S-class. But concern Daimler has opened a curtain of secrecy over a sedan generation w223: first official teaser was published back in May, and three weeks ago the chief engineer shared information about the technology and chassis of the future flagship. Now declassified interior and, in particular, multimedia MBUX. She debuted in 2018 at A-class and since then managed to appear in the arsenal of almost all models of the brand, however, the current S-class will get in a very modified form.

Recall that the S-class of the outgoing generation was the first Mercedes with a characteristic front panel architecture: the screens of devices and media systems are combined in one plane. The new sedan portends a gradual rejection of such an arrangement: the virtual tidy and the screen of the media system are again separated. In addition, the new sedan will immediately get the second generation MBUX: most functions, including climate control, are now controlled via touchscreens, as a result of which the S-class interior has lost 27 physical buttons. The developers claim that the new version of the MBUX system will also work on horizontal displays, so there is no talk of a mandatory transition to vertical touchscreens. After the S-class, such a display will appear on several new Mercedes, but not all without exception. 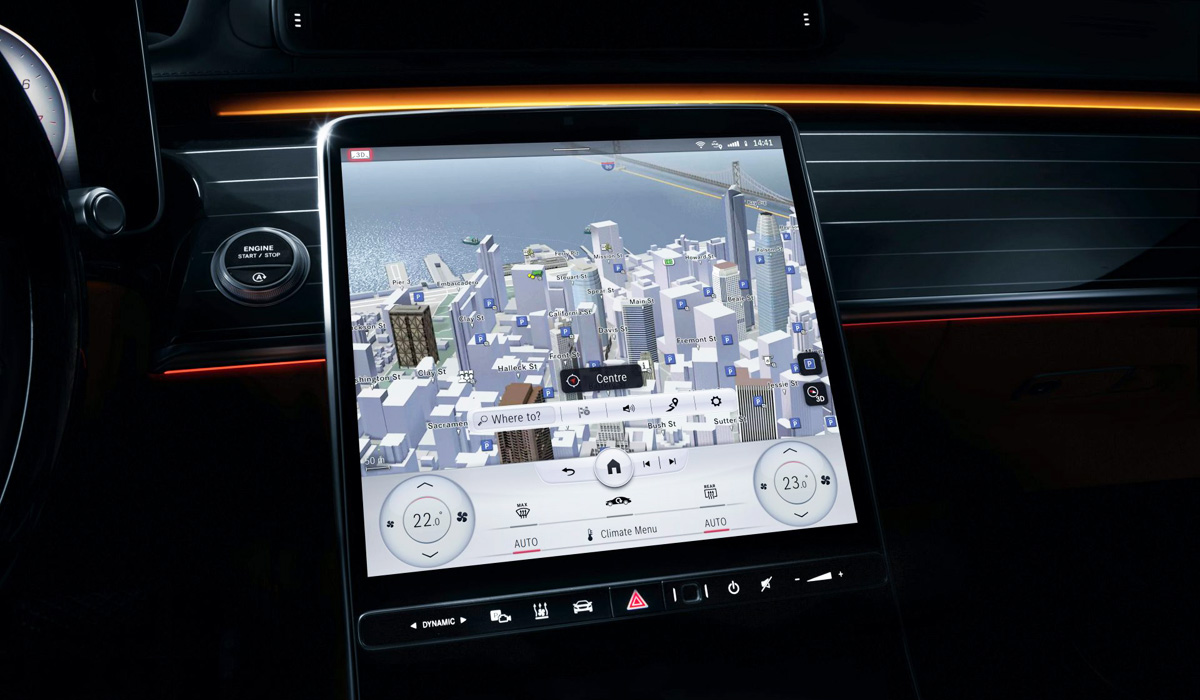 Judging by the photos, the total number of screens in the interior has grown to six. In addition to the central vertical touchscreen of the 12.8-inch media system and the dashboard display with a 3D effect (apparently, this is an analogue development Bosch, introduced last fall), rear-row passengers got two screens on the backs of the front seats, as well as a small touchpad in front of the central armrest, which can function autonomously (it can be removed from the slot and used as a separate device). In addition, there are two projection displays to choose from: the more expensive version is equipped with an augmented reality system that displays navigation tips on the windshield taking into account the traffic situation in real time. 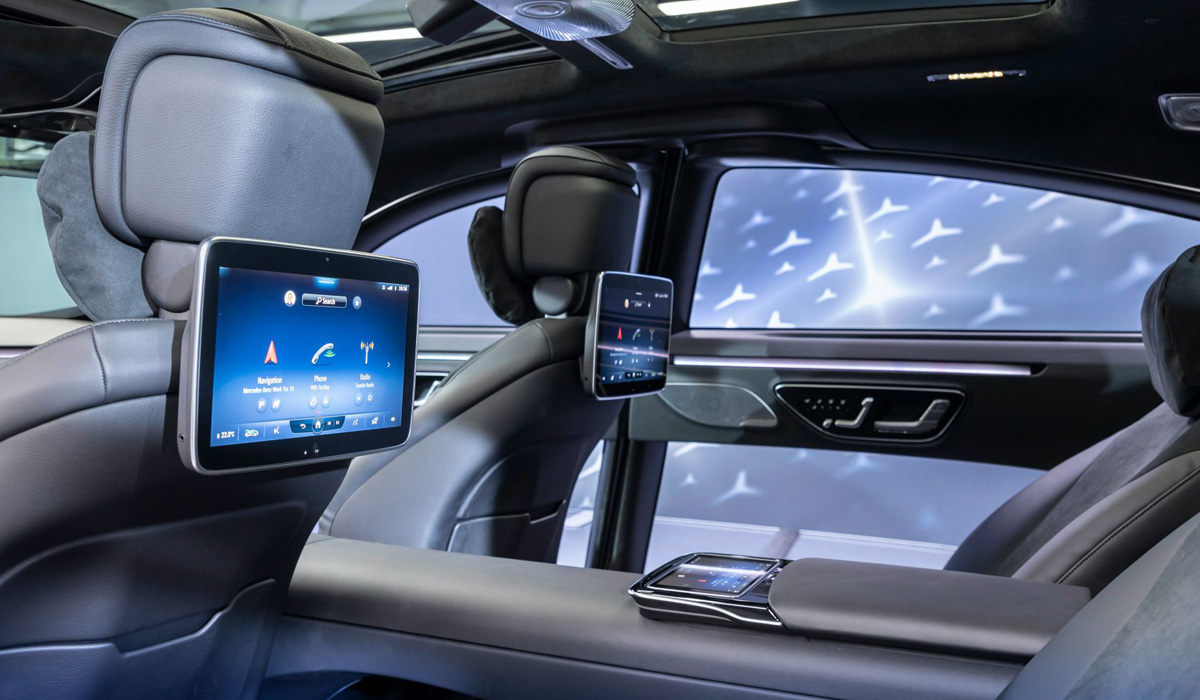 Voice control activated by the phrase “Hello Mercedes!” (By the way, the new generation MBUX system has the list of supported languages ​​increased to 27), it not only understands the commands better – now it allows you to have long conversations with an electronic assistant who can explain where the first-aid kit is hidden or how to connect your smartphone via Bluetooth. In addition, the new S-class has acquired an authentication system, which replaced the standard password entry: for access to individual settings or confirming electronic payment, you can set the order of entry by fingerprint, as well as voice and face recognition using the camera located in the dashboard .

The new auxiliary complex not only monitors the driver’s fatigue, but also instantly determines the passenger’s intention to unexpectedly open the door thanks to a system of cameras and sensors: this function will help to avoid an accident when the car detects the approach of another car. It is also the electronic assistant’s responsibility to monitor whether the child seat is installed correctly.

The list of available functions of the MBUX system in the future S-class will depend not so much on the level of equipment as on the market and the needs of a particular client, so it’s too early to say which options will be offered to Russian customers. Some of them will be available already in the basic version, although the list of positions offered for a surcharge will become known closer to the start of sales. The fact is that from the point of view of hardware, the system on all cars will be identical, so the list of active functions can be configured not only at the stage of ordering a car, but also after its purchase. And if you take into account that MBUX will regularly receive software updates “over the air”, then some functions can be activated independently over time.

By the way, company representatives said that the new multimedia, in addition to the built-in functionality, will be able to work with external applications developed by third-party companies. That is, S-class owners will have the opportunity to not only watch videos on the Internet, but also, for example, order food delivery (this function already works in China with the current version of the MBUX system). Developers add that they are open to suggestions and are ready to provide support for the creation of such programs – this will help expand the capabilities of the new media system.

The next piece of information about the new S-class of the W223 series will be published in three weeks: engineers will talk about security systems and comfort in the back row, and the final teaser will be a demonstration of the interior elements of the future flagship, scheduled for August 12. As for the official premiere, it will have to wait until September.

Facts vs Hoaxes: Here Are 6 Signs Your Mother Will Give Birth to a Boy

The German remains cautious. The 32-year-old driver says he is still in talks with two teams.In an interview...
Read more

When will the 2020 YKS preference results be announced?

Simon Cowell broke his spine: He sent people a clear message after the operation!

Simon Cowell will have to be completely calm for the rest of this summer's holidays. He broke his...
Read more

Facts vs Hoaxes: Here Are 6 Signs Your Mother Will Give Birth to a Boy

The British hotel group fell into the red in...
Read more
Business

Territorial continuity: ACCD’OM calls for the maintenance of the Air France Paris / Bordeaux airline at Orly – All the news from overseas in...