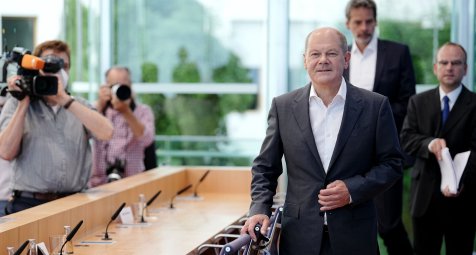 Berlin – Ukraine war, energy crisis, inflation and relief for the people, cum-ex scandal. Chancellor Olaf Scholz (SPD) spent an hour and forty-five minutes answering questions from the capital’s journalists at a summer press conference today. The corona crisis was not an issue for a long time. Shortly before the end of the question and answer session, the planned Infection Protection Act was discussed.

The Chancellor assured the federal states that they could also take protective measures in autumn and winter in the event of a worsening of the corona situation. Scholz emphasized that the federal government had presented a proposal for “legal framework conditions for the states to take action”.

He referred to a protection concept presented by Federal Minister of Health Karl Lauterbach (SPD) and Federal Minister of Justice Marco Buschmann (FDP) at the beginning of August. Both initially had very different views on the question of fighting the pandemic and only after a long struggle were they able to agree on a new version of the Infection Protection Act, which is still controversial. The previous measures will expire on September 23.

Scholz continued: “Our program is that when the Bundestag meets in September, we will pass these laws immediately, so that there is an immediate connection for options for action for the whole winter, when the laws that apply today on September 23 run out.” He assured: “It will work.”

The proposals are now being discussed further with the federal states “in order to turn them into a joint project”. Scholz explained that the options for action demanded by the scientists and relevant politicians in the past few weeks are “substantially anchored” in the concept and will then be available.

“No one can predict with certainty what course the COVID-19 pandemic will take in the fall,” said Scholz. If things go well, you don’t have to use the opportunities at the state level. But if it is necessary, they are available.

The day before yesterday, the proposals by Lauterbach and Buschmann met with a mixed response from the federal states. And the plans are also controversial within the traffic light coalition – especially in parts of the FDP parliamentary group in the Bundestag, which opposed their own Minister of Justice.

Despite existing differences, Scholz assumes that the government alliance will continue in the long term. The coalition will hold out for the four years of the current legislative period, said the chancellor. “I even have a perspective that goes beyond that, as I’ve said on a number of occasions.”

“It is not the case that a unification party conference took place with the coalition agreement,” emphasized the Chancellor. Rather, it is about three different parties that have also started with different political programs – for example in tax policy. Nevertheless, the partners brought about the coalition agreement, “which we are now working through and pushing forward bit by bit and even at great speed”. © dpa/afp/may/aerzteblatt.de