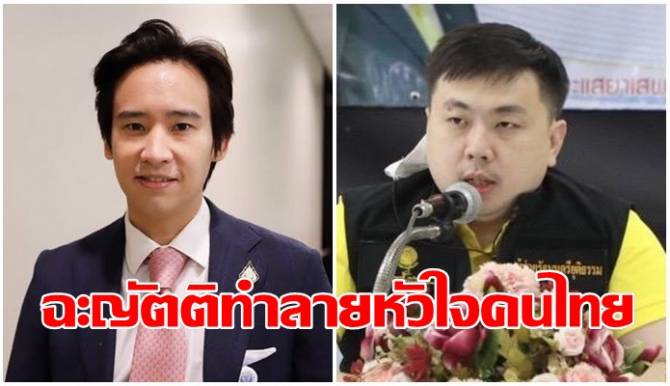 Samart Chha “Kao Klai Party” has submitted a motion to destroy the hearts of Thai people. Piercing the amendment of Section 112 of the Criminal Code, impairs the security of the monarchy Supporters of MPs join hands to overturn this motion before national security collapses.

Today (11 Feb.) Mr. Samart Jenchai Jitvanich Assistant Minister of Justice As the director of the Center for Complaints, the Pracharat Party (NACC) posted a personal Facebook account called “Samart Jenchai Jitwanit” stating that he was aware of the news of the case. Most of the party’s MPs Has submitted a motion to the House of Representatives to amend Section 112 of the Criminal Code, he was very shocked that The MPs of the Kao Kao Party dare to do unworthy actions towards the monarchy, which is dearly loved by the Thai parents and brothers and sisters all over the country.

In regard to defamation laws, people across the country are also protected by the Criminal Code, Section 326, stating that “Anyone who insults others against third parties. In any way that is likely to cause others to be dishonored, insulted or hated That person commits an offense of defamation. Shall be liable to imprisonment for a term not exceeding one year. Or a fine not exceeding twenty thousand baht Or both “fine” and the general public is also extra protected. Article 328 states that “if an offense of defamation is committed by advertising with documents, drawings, paintings, films, images or characters that make it appear whether or not Any way, a phonograph or sound recording, recording or writing is done by broadcasting. Or image distribution Or by proclaiming by other means The offender shall be punished with imprisonment not exceeding two years. And a fine of not more than two hundred thousand baht “It can be seen that ordinary people are still protected at all

“But the party’s MPs are very advanced. Which represents the people of Thailand, has the legislative power to issue laws, but has returned to amend the law relating to the main institutions of the nation so that there is no protection law at all Or there is very light Is to reduce the criminal penalties, Section 112 to one year imprisonment A fine not exceeding one hundred thousand baht It can be seen that the law to protect the people is more than the protection of the monarchy. Which right here I consider it extremely inappropriate “

You can continue to say that above all I have seen. 3-4 MPs from the Kao Kae Lai Party went to the Criminal Court to charge others for defamation by advertising. There is a two year jail sentence. I am very surprised that if others lose their rights but keep their rights. But on the other hand, the beloved monarchy rises above politics, pulls it down and attempts to tarnish the institution. This is the first step in the undermining of the monarchy, which has been illustrated abroad in Thailand. In Thailand, the monarchy has long been associated with society. Since the existence of Thailand We can have history because we have Thai language, which arose during King Ramkhamhaeng the Great. And he is considered the king of Thailand, but today the party’s MP is very advanced That submission is destroying the hearts of Thai people, I think Mr. Pitha Limcharoenrat As the leader of the party advanced Be responsible And I am sure that if this matter enters the House of Representatives, there will be Many MPs are certainly prepared to wait to overturn such a motion The more I am sure The MPs of the Palang Pracharat Party will certainly raise their hands because General Prawit Wongsuwan, the leader of the Pracharat Party. There is absolute loyalty and gratitude to the 3 main institutions.

I believe that in the end MPs will never be ungrateful for their native land. And the monarchy Which in ancient times, the monarchy was like a lord of life So I would like to bring up the meaning of the word unthankful to remind.

The word unthankful means a person who does not feel the gratitude that others have done for themselves. The one who has no gratitude is ungrateful, betrayal, unfaithful, who cannot remember who has done good, has helped him. Who forgot the merits of others who had done for themselves Who do not accept the favor of anyone

I would like to bring up Kham Pali to warn Mr. Pitha and the MPs of the Kadai Party who submitted the motion to read in order to gain wisdom. Do not mistaken, do evil, think evil, the Pali word that “Sopajjepthawathchanakatnjumphirathye To give the whole land Still a ungrateful person cannot love “

Therefore, I would like to warn Mr. Pitha, as the leader of the Kadai Party, to learn to listen to Mr.Karampon Pornklang, MP of the Progressive Party. Because I was worried that the villagers would not choose the next generation party Concerned that the villagers would misunderstand that the MPs were those who, even if they gave all the land, could not be loyal I hope this message will reach Mr. Pitha’s ears. Because it will be good for Mr. Pitha and his own party