Researchers Call a Meteor Exploding in the Antarctic Sky 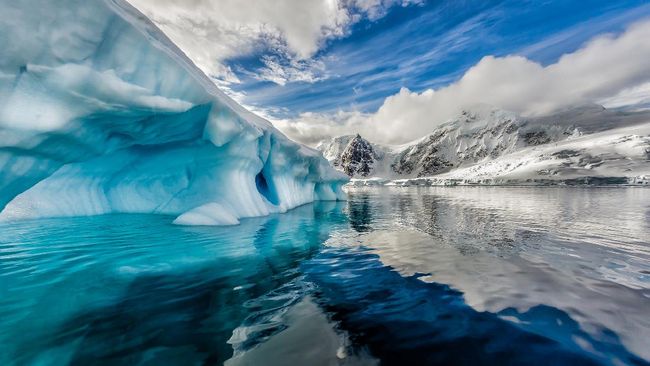 The research team discovered how meteor had fallen and exploded above the sky Antartika 430,000 years ago and rained down the land in the polar region with a spray of super hot gas and meteorite debris.

The conclusion was obtained after they found a small debris in Antarctica that occurred as a result of the explosion.

In that study, a research team from the University of Kent, England, took mineral particles from Walnumfjellet in the Sør Rondane Mountains, Antarctica. It is estimated that the meteor that exploded in the Antarctic sky was as wide as a football field.

“We know asteroids are dangerous and recent studies have shown an asteroid exploding in space (airburst) is more dangerous than (collision) a large asteroid. Because large asteroids are very rare, “explained Matthias van Ginneken, a planetary science researcher at the University of Kent and lead author of the study studying ancient asteroid explosions in the journal Science Advances.

This meteor explosion event occurred in 2013 in Russia. Just then, a house-sized meteor exploded over the city of Chelyabinsk. Shrapnel from the explosion shattered glass and injured more than 1,600 people.

If the meteor that exploded over the city was about the size of a meteor that had exploded in Antarctica, then the city is expected to be destroyed.

So far, Antarctica is said to be the ideal environment to search for meteorite remnants. This is because this area has a dry and cold climate with minimal human interruption.

Launch Live ScienceThe chemical composition of the particles suggests that they were formed hundreds of thousands of years ago during an air explosion in the lower atmosphere, which occurs when a meteorite vaporizes before hitting the ground.

To study how these particles appeared, the team conducted a thorough chemical analysis, searching the literature for reports of similar particles and building numerical models to visualize the original asteroid that created them.

The particles the researchers took were about 0.004 to 0.01 inches (100-300 micrometers) across and mostly contained the minerals olivine and iron spinel, which form snowflake-like patterns on some of the particles.

The minerals are held together by a small number of glasses. That composition fits perfectly into a class of meteorites known as CI chondrites. The high quantity of nickel in the particles also indicates an extraterrestrial origin, since nickel is not very abundant in the Earth’s crust.

Launch National Geographic, the researchers collected more than 12 pounds of sediment from the summit and brought it back to the laboratory. They selected 17 spheres, tiny spherical grains from the melted meteorite forged during the collision, for closer inspection.

Instead of being a single sphere like most micro meteorites, some of them stick together. In fact, the sample contains oxygen isotope ratios that are inconsistent with known asteroids.

The sample dates back to 430,000 years based on its position in the ice core, which is buried 1.5 miles below the surface. Researchers also say the hundreds of thousands of years of phenomenon are similar to the air blast of the Chelyabinsk meteor a few years ago.

Read Also:  Meteor Explodes in the Sky of America with the Power of 200 Kilograms of TNT