Red Alert: The music industry’s cry for help: the sector takes to the streets in 28 Spanish cities this Thursday | Culture

Workers in the entertainment and events sector, grouped in the movement Red alert -where associations, companies and individuals are included- will be demonstrated this Thursday, September 17, in 28 Spanish cities, previously distributing tickets to attendees for “controlled and limited mobilizations.”

The objective of these protests is to “give visibility to the alarming situation” that the sector is experiencing, “at the edge of collapse” due to the coronavirus health crisis. “We went out into the streets, we had doubts because with the current situation it could be seen as a tide, but it is evident that the actions taken so far have not worked to raise awareness,” Red Alert spokesman Iván Espada explained to Europa Press . “The visibility and awareness necessary to face the problems of the sector has not been achieved, and we still do not know how the new aid announced is applied. We believe it is necessary to go out and read the manifesto where measures are collected for all members of the sector, “he explained.

According to the organizers, the simultaneous mobilizations are aimed at an organization, management and development “with the maximum hygienic-sanitary measures.” “A qualitative and not quantitative incidence and impact is intended, and therefore there is going to be an appeal for mass assistance“They have explained. On the contrary, they will be” controlled and limited “mobilizations where participants will register in advance to obtain an assistance ticket as a preventive measure against the risk of contagion from Covid-19.

The claims of the manifesto include the need to recognize the entertainment sector and events by institutions and public administrations such as a sector “particularly affected” for the coronavirus and “priority”. In addition, they ask for the “immediate” creation of a sectoral table.

Likewise, they ask for an “immediate reactivation” of the cultural and event agendas of the public administrations, “under strict compliance” with all health security protocols. They also include proposals for the self-employed, employed, companies and the sector globally.

Espada recalled that the problem facing the sector is also related to the celebration of concerts. “The proof that they have been possible exists. But now, the eve of the event, the authorities come and cancel it claiming precaution, despite the security plan with strict measures. That sinks you,” he lamented.

Although they still do not handle unemployment figures in the sector, Espada has advanced that the volume of work carried out at this time is 10% in relation to previous years. Likewise, losses in the live music sector amount to 660 million euros.

Red Alert is part of the international movement ‘#redalert’ ‘#wemakeevents’, in which there are currently seven adhered countries. All with the same image, motto and direction, and that next September 30 they will all join in Global Day, where professionals from all over the world will come together to give voice, on the same day, to a sector impacted by the Covid-19 crisis.

Thus, in addition to the mobilizations, as has already been done in North America or the United Kingdom, the movement is becoming visible with the red lighting of facades and interiors of buildings linked to the sector.

All my support at this time to my colleagues (technicians, programmers, assistants, backliners, loads, assemblers, ushers, security, musicians …) in an especially hard time for all … We are in #Red alert . #redalert pic.twitter.com/O8TnHfmYLG 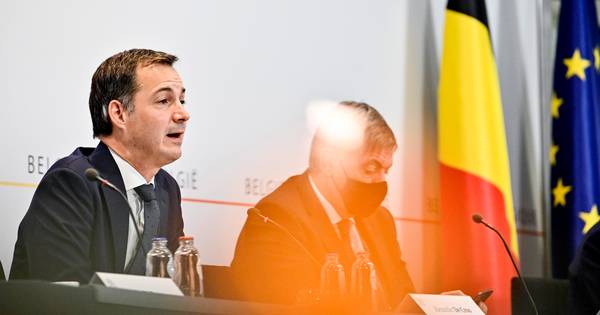 OVERVIEW. These are the rules of the “stricter lockdown”: autumn break extended, no more visits at home and non-essential shops closed | Instagram VTM NEWS

Overview | Tightened new lockdown in Belgium: these are …