Arlington — The coronavirus pandemic has claimed the lives of more than half a million people in the United States, but the opening match of the new Major League Baseball campaign at Globe Life Field, was the occasion for fans of the so-called ‘king of the Sports’ will return to the stadium to celebrate every pitch, every hit and every home run of the new season.

The Texas Rangers allowed 40,158 fans into the first game at their home on Monday.

“I waited a year to be here, I was not going to miss opening day for any reason, I am a super fan of the Rangers,” said Ruby Ruvalcaba, a third grade teacher from the Irving school district.

The 30-year-old, who was accompanied by her two-year-old daughter and 54-year-old mother-in-law, said the pandemic was not going to stop her from being present at the stadium and supporting her beloved Rangers.

“I have mixed feelings; It can be risky to be here, but I really hope that nothing happens to us, ”he said.

Monday’s game against the Toronto Blue Jays represented the largest gathering of people to witness a sporting event since the worst health crisis in 100 years erupted in March last year.

The stadium bleachers were crowded so that social distancing, a key factor to prevent the spread of covid-19, was non-existent, although the retractable roof of the stadium remained open all day.

The protocol guide for sporting events established by the Centers for Disease Control and Prevention of the United States (CDC) indicates that there must be a space of six feet (two meters) of distance between people as a measure to prevent contagion.

Read Also:  Ponte de Lima 'to the pine cone' in times of pandemic

In the interior corridors of the stadium, fans lined up in long lines to buy hot dogs or a beer, but at no time was it appreciated that there was an appropriate distance between people.

In the store where Rangers caps, uniforms, T-shirts and all kinds of memorabilia are sold, a crowd rushed at the cash registers to pay for their purchases without any social distancing.

The Major League Baseball season kicked off on April 1 and no other team has opened their stadium to 100% capacity, except the Texas Rangers.

Texas Gov. Greg Abbott ruled that face masks were not required, although the Rangers asked fans to wear masks at all times, except when ingesting drinks or food.

“It’s not a baseball game unless we eat and drink at that game,” he said to The Dallas Morning News Erin Carlson, director of graduate programs in public health at the University of Texas at Arlington and a longtime Rangers fan.

“So putting a requirement to wear face masks for a stadium is a perfectly noble intention, but the reality is that fans will not wear face masks in the stadium because the stadium experience involves eating and drinking throughout the game. So we will be without a mask and sitting inches apart from each other while we shout and sing, ”he explained.

Since the pandemic broke out, no sporting arena has received the number of fans who came to Monday’s baseball game at Globe Life Field.

In July of last year, Bristol Motor Speedway hosted 30,000 fans to witness a NASCAR race in an oval that can hold up to 140,000 people.

During last season’s games, the Dallas Cowboys allowed up to 30,000 fans at AT&T Stadium, which can seat more than 80,000 people.

Attendees at the Bristol Oval and AT&T Stadium dwarfed the 40,158 fans who packed the Rangers’ home to full capacity on Monday.

US President Joe Biden said last week that allowing Globe Life Field to sell out was a “mistake” and called the move “irresponsible.”

“I understand what the President means, but I respectfully disagree with him,” said Giovani Quirarte, a Rangers fan who turned up at Globe Life Field on Monday.

“Less and less people are infected, we already have vaccines available and the truth is that what people already want is to break the cycle of the pandemic and return to normality,” said the 30-year-old man who lives in Fort Worth.

Last year, the Rangers’ 30 home games were played without fans in the stadium due to the covid-19 pandemic.

While fans were able to participate in the National League Championship Series and the World Series, Monday’s game was the first of the regular season that fans were able to attend a Rangers game at Globe Life Field.

The Rangers decided to open their stadium to 100% of its capacity based on the downward trend – compared to numbers during the winter – that have shown the cases of contagion by covid-19 in North Texas, in addition to that every day more people have received the vaccine to counteract the virus.

“As excited as we are to welcome Rangers fans to the stadium, our organization also understands that we are still in the midst of a global pandemic and that this is not the time to move away from the protocols that we have implemented. the last 12 months, “Rangers Executive Vice President Rob Matwick said in a news conference he held last week.

“Despite the challenges posed by the pandemic, there is a safe, responsible way to run events. We hope to do so, but we also understand that everyone’s cooperation is needed for it to be successful, ”commented the manager.

According to a survey conducted by The Washington Post and the University of Maryland, 42% percent of sports fans feel safe attending stadiums to witness sporting events amid the pandemic.

40% said they did not feel comfortable and 18% were undecided.

The number of people confident in attending sporting events shoots up to 66% when the games are held in open-air stadiums, according to the survey.

“I’m not afraid to be here,” said Quitarte, the Rangers fan, who along with 40,000 other fans seems to have put the chapter on the pandemic in the past. 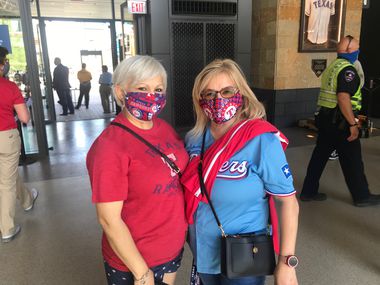