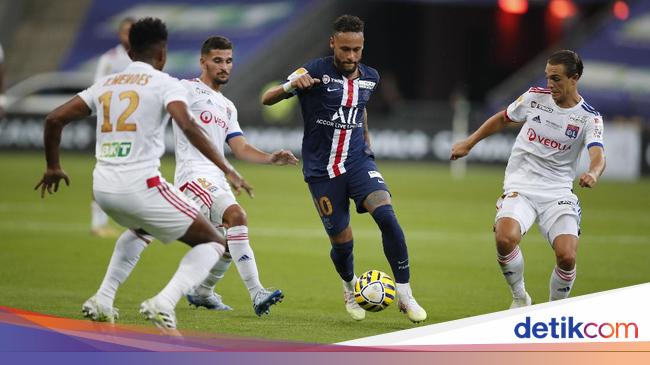 Paris Saint-Germain successfully wiped out the domestic title this season. This was confirmed after they defeated Lyon in the French League Cup final.

At the Stade de France on Saturday (1/8/2020), both teams failed to score in normal times and extra time. As a result, the match must be completed through the shootout round.

In this high-fives session, six PSG kickers successfully carried out their duties, including Neymar. While at Lyon, Bertrand Traore failed to score in the sixth turn.

Thus, Lyon’s dream of qualifying for the Europa League next season was foundered. They also could not escape through the standings after only finishing seventh.

As for PSG, this result solidifies their dominance in France. Previously, they had sealed the French League title and the French Cup.

PSG immediately pressing in the 5th minute passed Neymar, but long-range shots can still be secured Lyon goalkeeper, Anthony Lopes. Three minutes later, the Brazilian attacker was again given a chance, but again it still did not produce results.

Lyon then push back. There are three good chances recorded in the first 15 minutes. First pass Memphis Depay in the 12th minute, then Bruno Guimaraes in the 13th minute, and Houssem Aouar in the 15th minute. All three shots were not on target.

Lyon’s next chance arises in the 37th minute. Maxwel Cornet opened fire after using a corner kick, but was thwarted by goalkeeper PSG, Keylor Navas.

In the remaining time of the first half, then PSG again threatened. Idrissa Gueye releases a long-range shot, but Lopes can still be countered. In injury time, opportunity Angel Di Maria through the counter-attack also failed to change the score. The first half ended goalless.

In the second half, the deadlock situation was again experienced by both teams. Neymar almost scored in the 53rd minute, but Lopes saved his free kick.

Lyon also responded by free kick in the 81st minute, but Cornet’s execution was pushed over well by Navas. A minute later, the Costa Rican goalkeeper returned to secure the net, this time from the kick of Karl Ekambi.

Neymar threatened again in the 87th minute. Getting Ander Herrera’s crossing, he almost changed the score if his header wasn’t tipped by Lopes. Until the fight was over, the score remained goalless and continued into the extra round.

During the 2×15 minute period, the two teams failed to score again. Though Lyon had to finish the fight with 10 men after Rafael was sent off for his tackle on Di Maria outside the penalty box in the final minutes of the match, but that failed to be utilized PSG.

Determination of who is the champion French League Cup must be continued through the shootout. The first kicker of both teams, namely Joachim Andersen and Di Maria successfully carried out their duties.

In the second kicker session, Cornet managed to break down the Navas goal even though his shot was ignored. While Marco Verratti no trouble outwitting Lopes.

Maxence Caqueret also managed to add a goal for Lyon in the third session. So it is with Leandro Paredes.

The fourth kicker of both teams, Thiago Mendes and Ander Herrera also successfully carry out their duties. So it is with Houssem Aouar and Neymar in the fifth kicker.

The composition of players