Prime Minister Alexander De Croo on avoiding lockdown: ‘What certainty do you still have in a world like today?’ 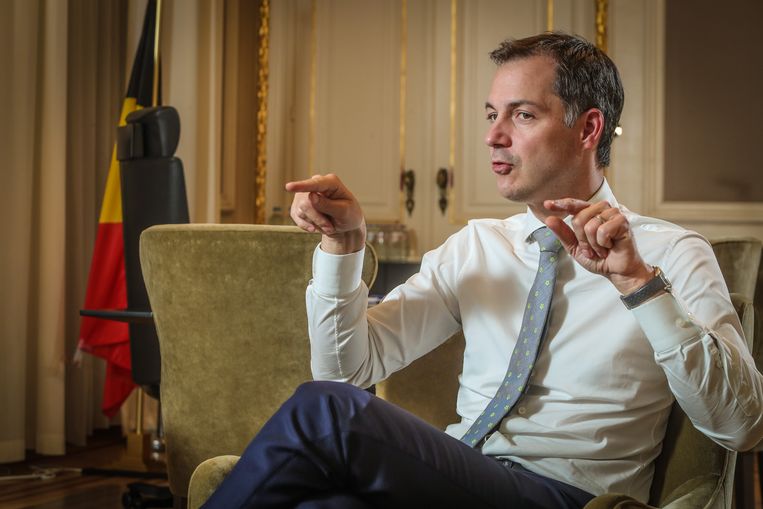 Are you used to being prime minister?

“No, to be honest, I don’t quite realize it yet. Since that Wednesday morning when it became clear it was me, it has just been one express train. So much has happened. It feels like three weeks, but it’s only one. ”

You also look very tired, to be honest.

In retrospect, you played it very well. First torpedo purple-green and defuse candidate prime minister Gwendolyn Rutten. And then become prime minister of such a coalition.

“It wasn’t like that, but I’m not going to get back to that too much. The previous purple-green attempt failed because CD&V was not respected in it. Today every party is respected, and that was mainly due to Egbert (Lachaert, chairman of Open Vld, ed.) And later Conner Rousseau (sp.a). They have finally created a trajectory in which each of the 7 parties felt comfortable. But contrary to what about half of Belgium thought, it was never my attitude that I had to become prime minister. I have never reasoned like that. There are several roles I could have played. You can’t let your happiness depend on that. ”

Did Rutten congratulate you?

And what did you answer?

(laughs) “Thank you. And you shouldn’t ignore the rest. ”

More than a year ago you said in this newspaper that Open Vld should certainly not supply the prime minister. I quote: “we are the seventh party in parliament. You have to respect democracy. As prime minister without clout, you are the mop of your government. ”

“That was the way I looked at it then. But afterwards they did indeed try to bring the major parties together. I don’t know how far they got on with that, I can only say that it didn’t work out. Then you cannot leave a country adrift. No one voted for adrift last year. ”

What do you say to the people who now see Open Vld as the traitors of Flanders, because you eventually formed a government without N-VA?

“The question is whether those people thought that before. Those who say that don’t believe in a country like Belgium. I respect that choice, but it is at odds with what I want: to make this country work. That is what people expect from us. In the past two years there has been a lot of trouble and so little has been done. Now we are going to do more and less palaver. I understand that a lot of people are skeptical and while reading this think: yes, see first. I can only agree with those people and I think everyone on this team is very aware of that. It’s up to us to prove that we have our feet on the ground, set the right priorities and get things working again. I also really feel that this is a group that grants each other something and that is something I have always missed in politics until now. A group that says: we are going to do that together here. ”

Which of your ministers has surprised you the most?

“Vincent (Van Quickenborne, ed.) Actually surprised me enormously during the negotiations. Very often he has positioned himself as the great compromise maker and that is not how he is known. ”

However, you know him well.

“Yes, and my experience was that he always flies in it like a bull.” (laughs) “I am actually pleasantly surprised by the mentality with which everyone is in that government. Bon yes, we are busy for 7 days. The first time there is a public disagreement, you will serve this statement to me. ”

There is a lot of criticism of the coalition agreement: it excels in vagueness, a lot of expenditure has been conceded, the income is much less foreseen. The atmosphere could cool down quickly.

“That is not true. Part of the budgetary trajectory is fixed and then there is a part that depends on the state of the economy. If she does better, then we should definitely put more money aside. But if she’s doing bad, we’re not going to keep cutting, are we? Then we will completely kill our economy. ”

But should we continue to spend so much extra? I’m just thinking of the higher pensions.

Not enough, right? You do not touch the assimilated periods: people continue to accrue pension even during periods of unemployment.

“No, but it does state in the coalition agreement that the condition for access to that minimum pension must also be the number of years actually worked. Instead of getting lost in the symbols of one or the other, we just tried to do it in a different way. ”

About the corona crisis then. Marc Van Ranst says that we will go to a new lockdown if the number of infections does not decrease within 10 to 12 days. Is that right?

“I don’t know how things are going to evolve, but let me put it another way: we are in control. That is the message that I and Frank (Vandenbroucke, ed.) Wanted to give. Our behavior determines the difference between life and death in vulnerable people, that’s what it’s about. We Belgians are people with common sense. Let’s act accordingly. ”

Is a second lockdown still possible? To put it bluntly: we just can’t afford that, can we?

“As I said in my government statement: I will do everything I can to avoid that.”

You can’t say that for sure?

“What security do you still have in a world like today? In June we had all hoped that we would not be in this situation by October. This is a virus without a manual. Of course you are always going to have people who don’t respect the measures, but the vast majority of people are doing well. Let’s not frighten them, for many people it is already tough enough. ”

But in the meantime, all cafes in Brussels are closing. Shouldn’t they have shifted faster there, instead of so drastically right away?

(hesitates) “It is always easy to reflect afterwards. But Brussels has made the right decision, no matter how unjust it feels. ”

When did you tell your father you became prime minister?

(laughs) “I had to go to the king at 10 am after a whole night of negotiating. I didn’t look and I didn’t smell like it. So I quickly took a shower and shave in a hotel. I called him when I was brushing my teeth. ”

“No! He said “very good boy” and I don’t think we spoke for 30 seconds. And actually we still haven’t really talked about it, I just think. ”

He has spoken about it a lot!

(laughs) “Yes, but he hadn’t given any interviews for a long time and I think that’s great. I know how difficult that is for him. ”

And your sons? How did they react?

“Well, about a month ago my wife was in the car with my youngest and a journalist was interviewed on Q-music about who would become prime minister. He explained the various possibilities and eventually said that he personally thought it would be Alexander De Croo. My son then woke up and yelled, ‘Daddy? That’s impossible?’

That Wednesday morning I called my wife to say that our life was going to change seriously. The children were just awake then. But I said keep that to you, because nobody knows that yet. It was, at 7 in the morning. He took that very literally, because when a teacher came to him at noon to say ‘congratulations to your daddy’ he insisted that wasn’t true. ” (laughs)

Do you talk to them about politics?

“Yes, but they reduce politics to ‘arguing’. In the evening I ask my children: what did you do at school today? They ask me: did you fight again? And that made me think. Of course you are in politics with differences of opinion, but it has been very hard in recent years. Perhaps we should also realize that the language use of politicians is also seen by some as a kind of guideline. We can disagree, but that’s why we shouldn’t destroy each other. ”

What role will your wife play? We sometimes saw Mrs. Michel on the side of Melania Trump …

(laughs) “We haven’t talked about that yet. Annik has said that she would like to continue doing her job and I will do everything to do so. I wouldn’t want her to have to stop working because of my job. Imagine, after all I said about it before. I managed to get my sons to school twice this week and I intend to keep doing that. Ultimately, we have now seen how much we can do from home in recent months. ”

To the Prime Minister’s parents: ‘I refuse to drink champagne as long as this country is in this condition’

The new Hyundai i20 N: A car built with an emphasis on joy

New York reopens its beaches, a sign of cautious deconfinement

New wave of outbreaks in the province | Radio Ourense