Signs of stress at New York City commercial properties are fueling investor bets that problems in the nation’s largest real estate market could spread pain across the country.

Although stock markets are near record highs, assets whose fortunes are more directly tied to New York’s status as the heart of tourism and culture show an acute sensitivity to the disruptions of the pandemic. Hotel and store-backed debt prices have fallen, new lending has slowed, and lenders are increasingly cautious, leaving bankers and investors brace for being hit hard.

Investors are watching New York closely because Wall Street ties these loans together, packages them into bonds, and sells them to pension funds and asset managers around the world. Many see the city as an indicator, and the collapse in loan prices in Manhattan developments could be a sign of problems ahead for the more than half a trillion dollar market for so-called commercial mortgage-backed securities. .

Can the CMBS market make a comeback after the pandemic? Why or why not? Join the conversation below.

The prices of lower-rated commercial mortgage bonds nationwide have fallen in recent weeks. The extra yield, or spread, that investors demand to hold an index of double-B-rated CMBS bonds on 10-year U.S. Treasuries climbed to nearly 20 percentage points on Thursday, according to data firm Trepp, at their highest level since the financial crisis. . Some bonds have fallen from 70 to 50 cents on the dollar depending on industry and credit rating, the bankers said.

The pandemic has emptied commercial real estate across the country as Americans stay at home, shop online and avoid offices. Many hotels and retail stores have experienced a significant drop in occupancy rates, which has affected income and property values. According to a Wells Fargo report, this year’s appraisals of more than 100 distressed buildings with commercial mortgage debt showed property values ​​had fallen by 27% on average.

Uncertainty over how a recovery will play out, especially in major cities, has led some investors to bet on further lows.

“The distress in the financial markets was only for residential mortgage securities in 2008 and energy in 2015,” said Daniel McNamara, director of MP Securitized Credit Partners, who is betting that the prices of certain CMBS indices will go down. “In 2021, it will be commercial real estate and related securities.”

The Standard Hotel in the Meatpacking District is more than three months behind on an outstanding $ 45 million loan and has begun negotiations with its creditors. Photo: Richard B. Levine / Zuma Press

Other investors expect a more dispersed blow. As a sign of their preferences, a subsidiary of Brookfield Asset Management managed to place a $ 1.8 billion loan linked to One Manhattan West in September in commercial mortgage-backed securities. Completed in 2019, the Midtown skyscraper is more than 90% leased with reputable tenants including consulting firm Accenture PLC and the National Hockey League.

In New York City, commercial real estate appeared to be a safe bet during a decades-long surge in real estate prices and the development boom that spawned towers in all five boroughs. Today, hotels, restaurants and shops that depend on travelers are suffering greatly. Some commercial buildings show a decline in property values. The Royalton Hotel in Midtown Manhattan, a property at one time “so exclusive that people couldn’t go,” sold for $ 41 million last month to MCR Investors, a 25% reduction from what the previous owners paid in 2017.

The luxurious Standard Hotel in the Meatpacking District, home to the Boom Boom and star-studded parties for more than a decade, is more than three months behind on an outstanding $ 45 million loan and has begun negotiations with creditors , according to Trepp.

Some investors are pulling out of project financing in New York. Commercial loan volumes are down more than 50% this year in early October, according to Trepp. The big projects that defined the city’s skyline have also slowed. No loans over $ 50 million from the five boroughs were consolidated into commercial mortgage securities in 2020, although there were a handful of large single-asset, single-borrower transactions.

“The underwriting of properties in New York is really speculative right now,” said Jodi Schwimmer, partner at the law firm Reed Smith. She expects lenders to stay away from New York City projects until prices and property values ​​stabilize. 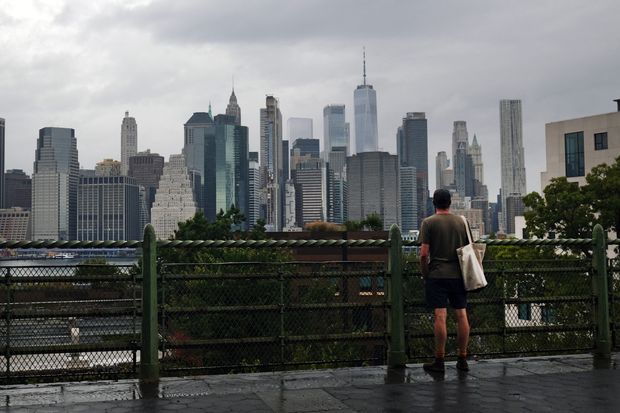 Many have said that while New York City has other challenges, the city has rebounded from the 9/11 terrorist attacks and the 2008 financial crisis. Photo: Spencer Platt /.

Commercial mortgage bonds were first hit in March and April, when storefronts, restaurants and offices across the country closed. The lowest rate commercial mortgages, known as “single-B” securities, have lost about half of their value and have not yet fully recovered.

Yet some concerns do not fully reflect the damage caused by pandemic shutdowns and the long-term changes that are occurring as Americans work from home and consume more online. Analysts and investors say commercial mortgage bonds will take longer to rebound than other types of debt because of their complex loan mix from various companies.

More than $ 3 billion in commercial property-backed loans in the five boroughs are currently in arrears, according to Trepp, and loans in negotiations with creditors total an additional $ 4 billion.

Few think the market is on the verge of a complete collapse. Many have said that while New York has other challenges to face – including growing deficits and potentially lower tax revenues – the city has rebounded from the September 11 terrorist attacks and the 2008 financial crisis.

Nonetheless, the slow recovery has made some investors hesitant to hold bonds of riskier borrowers, leaving them to hunt for properties owned by well-capitalized borrowers or buildings occupied by tenants who are supposed to continue paying their rent.

This lets investors pick and choose among assets related to commercial real estate. In 2008, hedge funds took advantage of the collapse in real estate values ​​by bypassing large swathes of the real estate market. But many say the opportunities now require a much smarter approach. Some analyze specific offers to identify vulnerable properties such as hotels or capture light spots such as data centers, high-level buildings such as One Manhattan West or warehouses.

“Any property that appears destabilized should be rented,” said Matt Salem, mortgage manager at KKR. “This doesn’t mean that we are redefining parts of New York, but we need to make sure the cash flow is sustainable for the near future.”

A series of benefits of aloe vera for the face that you need to know, overcoming dry skin