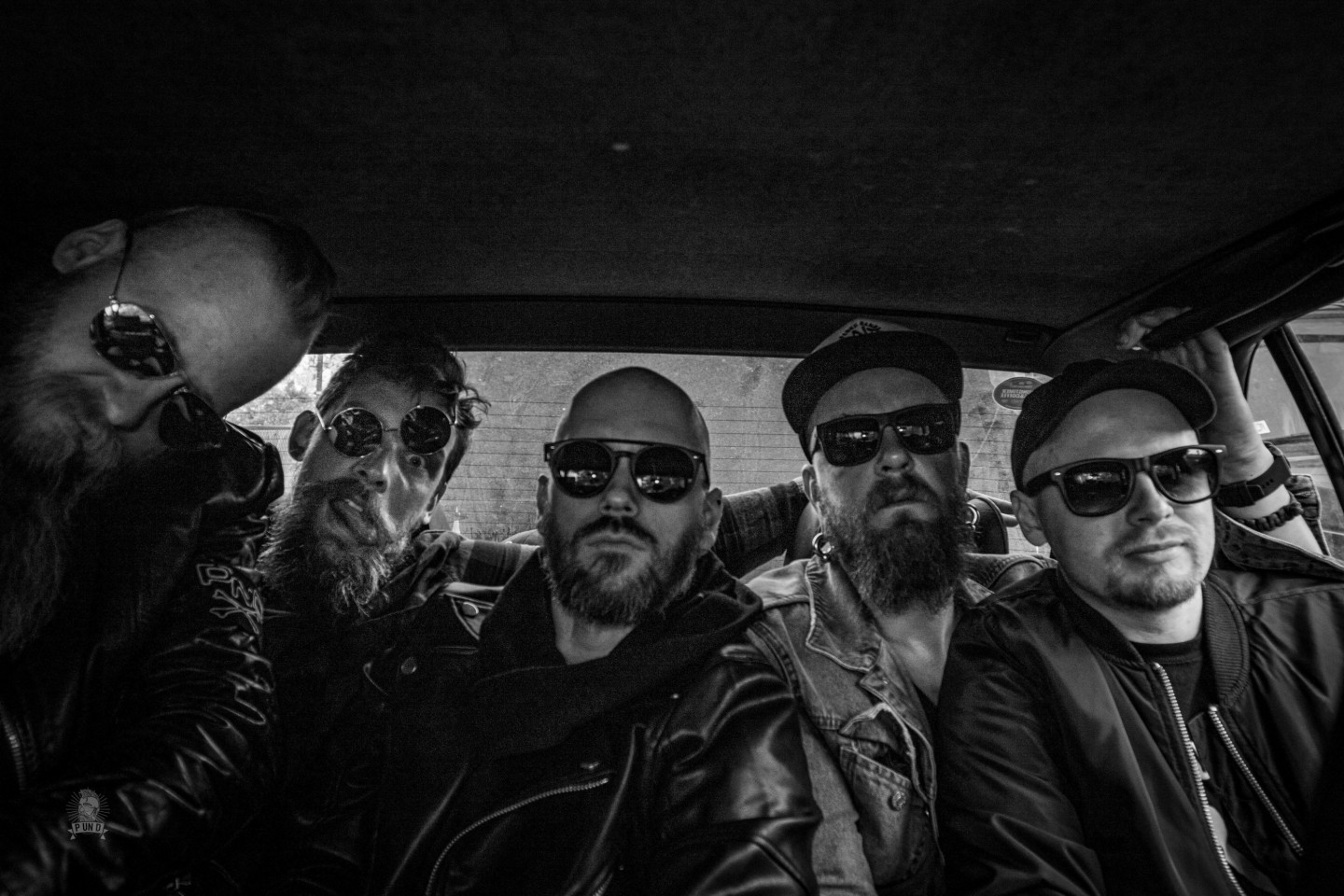 These concerts will also be a review of the Latvian punk rock flower – together with “PND” the legendary “underground” old masters “Inokentijs Mārpls”, one of the oldest still active “ska / punk” groups “All Day Long”, the noisy and rebellious girls will take the stage. group “ŠŅK” and the new generation of active punk rock contenders “Nicotini”.

New album after a 14-year hiatus

Although the first real punk rock band in Latvia “PND” has not slowed down in its activities for a while and is also quite active, its previous album “What is it – PND?” with such well-known pieces as “Girl”, “VVF”, “Two languages”, “Vagina”, “Mother, I will die different”, “Pardaugava”, etc. was released back in 2008. “Yes, we like Tool and A Perfect Circle, which released their albums after a 14-year hiatus,” jokes one of PND’s lead vocalists, Agris.

The new album can only be called a studio work, because it was actually recorded in the Old Riga club “Depo”, with the participation of sound director Gatis Zaķis. The album includes both new songs that have not been played in concerts before, as well as songs from the beginnings of “PND” – those that were not included in the band’s first album. “There are old tracks that have never been released, there are also cover versions, but a third are completely new songs that we have almost never played in concerts,” explains the other lead vocalist Marcis, who and his brother Didzi are the only ones in the PND since the band was founded. The main reason for releasing the album is to compile what has already been written and to have a good party in its honor. “We wanted to release the album with a live concert, so we waited for these two years of the pandemic and we didn’t release it.”

When the eldest son is younger than PND

“PND” plans to play only the new album – from A to Z, without the old tracks. The last time the group was seen on stage was at the almost cult status “Punx Picnic Riga 2022”, which took place in the deep corner of Kipsala, the so-called Fukushima, for four days at the end of April, and brought together 35 groups from six countries – no one says there are no punks in Latvia! “PND” was one of the most experienced groups of this festival (the oldest do not want to write – hand, but during its performance was one of the widest crowds of fans. “Generations are changing, but most of our concerts – well, at least 60% – are not listeners of our generation, but young people – teenagers. We are definitely not the most popular punk group among young people, we are definitely not even in the top five, but they come to our “cones”, “says Marcis convincingly.

The PND group was founded in 1998. At first, it seemed more like a musical “party” that brought together young people adorned with “grebenes” who, together with “metallists”, took over the functions of the Philharmonic Square, popularly called “refreshed”, and the struggles with “urls” who could not accept different-minded people. At that time, both brothers Mārcis and Didzis Pumpuri often lived in police stations due to their appearance (well, also due to street fights), they could not sing and play, but they started to create a “PND”, the former taking on the role of a guitarist and the latter taking on a bass guitar. . In 2001, the foundations were laid for the Sid Vicious Day punk rock festival, which is still held today.

“It seems incredible to me – it’s been over 20 years!” marvels at Marcis. “Interestingly, nothing else in my life is as old as PND – even my eldest son is only 17 years old, so I was on stage for five years at the time!” Great feeling! It’s like a good marriage – it’s just a coincidence that everything has happened so well. “

A joke has been circulating behind the scenes for a long time – if you want to climb on stage, but don’t know any instruments and don’t sing, play punk rock! The men of PND are not professional musicians either (Agris graduated clarinetists), but they are not ashamed of it. “We’ve talked about it,” Marcis thought to Agri. “Imagine if we played professionally – at what is the current music scene, how much new music do we have to produce, how abnormally much work do we have to do, for example, even for Don ?! If we do this “bad” in our work, we will communicate what can be achieved! Or, for example, Gacho – he asked us for a song (rapper Gacho released his version of “PND” for “Girl” last June), and two days later everything was recorded for him! If we had to “pity” it, go off, it’s an insane job! ” partly excited, partly appalled by the men of PND.

However, in their opinion, it also has its drawbacks. “It simply came to our notice then. We have a party, we do as we wish, we can sit on the same song for at least five years! Our only criterion [dziesmas izstrādē] is that we in the fifth can agree on how we would like it to sound. The main thing is that we like it, and if someone else likes it, it is perfect at all, ”concludes Agris.

Not singing about beer would be a betrayal

Both PND lead vocalists are already on the threshold of their forties, so it is quite logical how natural it is still to confidently express the group’s slogan “Never clear!” , “the presis breaks”, “put them in your mouth so that they know what beer is,” and so on. “That’s why we need to listen to the new album to understand the difference between ‘What is it – PND?’, Which was made 16 years ago and when we sang about vaginas, and what we’re doing in our 40s!” Marcis points out and adds with a laugh, “We still sing about beer, because it would be a betrayal not to sing about it!” Agris: “We still don’t have a song that doesn’t have to beep. This is one of the unwritten goals of PND – songs must be such that they do not want to play them on radio stations, but they should not be put on them at all! At the moment it helps us to organize concerts, sends offers about publicity and possible playing of songs – a person has talked to Latvijas Radio, no, there you remember, there are no options… Vo, so the image works! If we are remembered even after 20 years. ”

Nevertheless, PNDs are sometimes even invited to play in so-called “evening parties”, as well as at weddings and even funerals. “Yes, we have played at our wedding, but we evaluate such offers,” says Marcis. “If we think that there will be only one person at this wedding who will enjoy our performance – the inviter himself, but for others it will ruin the evening, then we refuse. We don’t play at the funeral either, because the deceased may have asked his loved ones to play “PND” at his funeral, but what about the others? If I had the belief that others would appreciate it, then yes, but if everything could almost end in a scandal, then no. We refused. “

Times when you no longer carry your mouth

There are now a number of new punk rock bands, the already mentioned “punk picnic” also brought together many young people who are obviously close to such music, but punk in the third decade of the 21st century no longer dominates “grebenes”, emo or gothic face paintings. etc. “They can paint, and you can even swallow it – it’s cool if we calculate how far our society has come, even in this respect,” Marcis smiles as Agris remembers looking around the corner to assess will he get to the bus without his injuries in his torn jeans at all … , and in music, but it seems to me that ideologically it is the same, it is still punk ideology. ”

Of course, there are other current issues, at that time the theme of songs was dominated by the theme “anarchy – the mother of order”. “While holding Sida Day and talking to young people, I have heard that, now that the younger generation is finally talking and singing about really difficult topics, no one has ever done that before. Although I do not agree with that, we also sang and sing about difficult topics! Of course, what he sings seems to be the most important thing for everyone at that time, but it could not be said that socially acute topics were not touched on before, ”says Marcis. Of course, PND has always been a bit more airy – beer, beans, etc. It’s a current classic! But this is deliberate positivism. Why always “smash” everyone ?! But you don’t have to touch on painful topics so that everyone can shed tears. “

Finally, in a conversation with PND, it is concluded that the immortal Sid Viches of the Sex Pistols was prophetic when he uttered his legendary phrase “punks not dead” – punk rock can never die, because beer and beans are always will be important! And there will always be something to protest against.