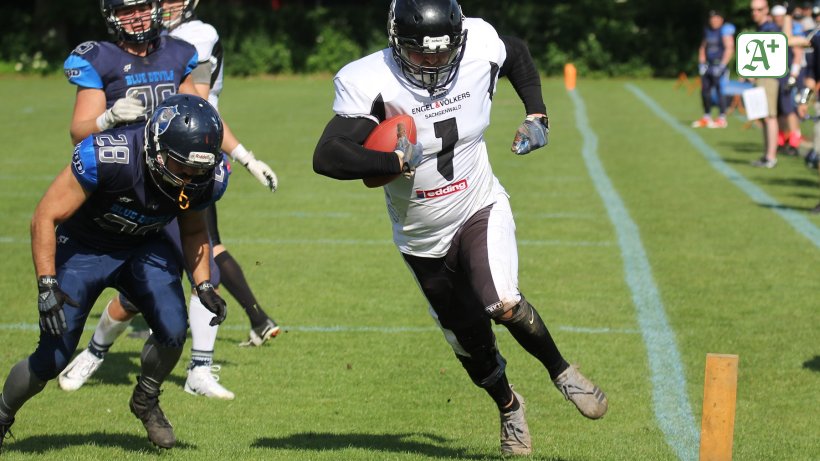 Schwarzenbeks footballers are promoted to the fourth-class league for the first time. Prominent support and a new space await in 2021.


Schwarzenbek. The sporty Corona year 2020 ends positively for the American footballers of the Schwarzenbek Wolves. As a Christmas surprise, shortly before the end of the year, the strong men of TSV Schwarzenbek received their final commitment to compete in the fourth-class league for the first time in the club’s history next year.

“We are really happy about this great news and are already giving everything for a great 2021 season”, cheered department head Kai Köpke. From a sporting point of view, the group north with the second representatives of the Bundesliga clubs Hamburg Huskies and Kiel Baltic Hurricanes as well as the Rendsburg Black Knights and Flensburg Sealords will be a challenge, “but we are happy to be able to present Oberliga-Football in Schwarzenbek”.

For the Wolves, it’s an ascent that’s over a year late. The national league season 2019 ended the footballer behind the Huskies II in second place in the table. However, for a long time it remained uncertain whether this would also entitle them to ascent. “We wanted to be promoted, we had deposited our interest in the North game,” said Köpke.

Now in December, the regional associations from Schleswig-Holstein, Hamburg, Lower Saxony and Bremen lashed their leagues organized in the Northern Association. Since in the major league with ten teams, two groups of five could be formed according to regional criteria, there was no league operation in the entire year 2020 and therefore no other athletic contenders, one place remained free for the European cities.

Season start 2021 at the earliest in mid-May

For the Hamburg Black Swans, the footballers of TSG Bergedorf, it continues in the association league. The “Black Swans” are relegated in 2019 as the bottom of the league table.

When – and if at all – the 2021 season can start depends on the development of the corona pandemic. “Only one thing is certain: As a full-contact and collision sport, we will be the last to train again, just like this year,” says Kai Köpke. The regular season in Spielverbund Nord is provisionally set from mid-May to mid-September.

More teams from the north reported than ever before

Positive: 17 clubs from Schleswig-Holstein alone agreed in December that they would like to take part in games from regional to association leagues with a total of 45 teams. There are more than ever.

It can be assumed that the current lockdown will be extended and that joint sports and training operations at amateur level may remain prohibited until February or March. The subsequent loosening steps are known from this spring: First you could practice together again in small groups, then in groups of ten, then with physical contact and only if the number of infections is very low again in the large group.

We are looking for players – even without prior knowledge

But this is necessary when playing with the oval ball. Department head Köpke and Wolves trainer Jan Tiessen can currently only maintain contact with their players via video conference. In the new year, there will initially also be theory lessons via Zoom, if moves are to be agreed. For the time being, there are also athletic tasks from a distance.

There were no major departures in the squad in this year that was banned from football, assures Köpke. Other interested players are welcome and can contact us. “We don’t even need to compete under 30 men,” says Köpke about the size of the squad. The Wolves will be offering free trial training. “Even without prior knowledge, players can come to us and be integrated into the team.”

The same applies to children and young people between the ages of ten and 16 who first learn the basics of the game in disembodied flag football. In the youth, the Wolves cooperate in a game community with Scharbeutz. “We are planning a for-free year for the youngsters, in which everyone can get a taste of our work without membership,” announced Köpke.

The Schwarzenbeker are not going to poach men’s players away, for example from their relegated rival from Bergedorf. “But we are now attractive to players who want to play in the upper league,” Köpke advertises. The supervisor crew apparently sees it that way. In addition to head coach Tiessen, TV presenter and football enthusiast Carsten Spengemann (“ran-NFL”) has also confirmed for 2021. The 48-year-old takes care of the Schwarzenbek defensive as a special coach.

If a lot is going to run normally in the coming year, then Wolves department head Kai Köpke has only one wish: a really big first league home game on Schützenallee. The new 1.2 million euro artificial turf pitch is currently being laid out there. In addition to the SC footballers, TSV footballers are also allowed to play there.

“An opening game in June, July or August – that would be something. Preferably in front of spectators,” says Köpke. There have been initial discussions about this. The artificial turf pitch could be completed in May / June.