On the verge of an oxygen crisis: the delta overcrowded the intensive beds, and Romania no longer gives us 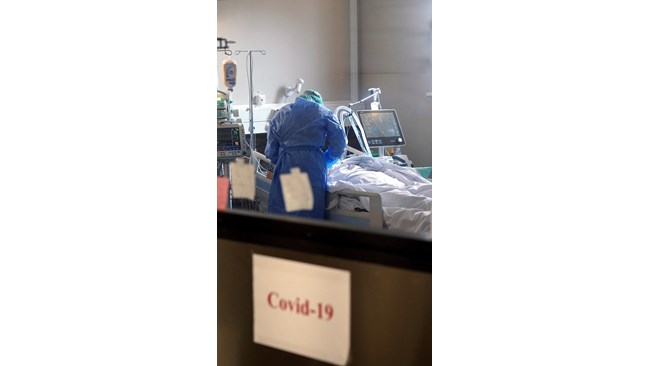 Manufacturers will supply them first, then the business

The situation becomes critical if we pass 9000 hospitalized

Most patients with complications from previous COVID waves, plus many hospitalized outside the intensive care unit in need of oxygen therapy, as well as the limited opportunities to buy medical oxygen from abroad, put Bulgaria on the brink of a crisis with its supply.

but health authorities only paid attention to him this weekend. The day before, they assured that there was no shortage.

However, on Monday at the Ministry of Health, the companies were invited to an emergency meeting with Deputy Minister Dr. Toma Tomov and the head of the Medicines Agency, Bogdan Kirilov.

It was decided to supply oxygen to the medical establishments at the expense of the industry (which industries use oxygen – see box). And every Friday the hospitals in the country have to send to the Ministry of Health information about their oxygen availability and the estimated quantities for the next 7 days.

In addition, representatives of companies producing and supplying oxygen already

so as not to

However, if the hospitalized 9000 are over, the situation becomes critical, because then the supply of the whole industry will have to be stopped and there will be only for the hospitals, warned Marin Dimitrov, manager of Sol Bulgaria – one of the 5 manufacturers of medical oxygen in us. The others are Linde Gas Bulgaria, Erlikid Bulgaria, Siad Bulgaria and Messer Bulgaria, the Ministry of Health told 24 Chasa.

Only Dimitrov’s company produces 60 tons of oxygen per day, which it already sells out completely.

“We used to produce 60 tons a day and there were 3-4 tons left so that it could accumulate in the tank. In the last month the level gradually began to decline, until at one point

Compared to the previous waves, the increase in oxygen consumption is not very large. According to Annamaria Axinte, manager of Linde Gas Bulgaria, the growth compared to the same period last year was 30%. But she said consumption is currently the same as in the spring. At that time there were over 800 people in intensive care units, but there were about 10,500 hospitalized, while now there are 680 intensive care units out of a total of 7,973 hospitalized (as of November 1).

oxygen therapy ”, points out Martin Dimitrov. There was increased consumption in the previous waves, he added, but then there was oxygen on the market, and now – no.

“Not now, because neighboring countries do not sell and meet their own needs,” he explained.

Until the spring, our country relied heavily on Romania, from which we bought an additional 200-250 tons, but now it has critical levels of disease and limited exports. The situation is the same with many other countries.

Over the weekend, Dimitrov’s company bought 80 tons from Greece, Albania and Croatia due to the growing needs of the hospitals it serves.

“But they provided them as a service. Consumption is also growing there and we cannot rely on them in the long run, “he said.

Another reason for the increased needs for oxygen, according to experts, is the use of high-flow (high-flow) devices.

These are systems that deliver much more oxygen and are used to treat severely affected patients shortly before they are intubated. Their use is not so widespread, but the difference in the amount of oxygen they use is significant.

“We have seen from colleagues in Italy, where the situation was extremely difficult in 2020, that they use high-flow devices that

in a minute, and

the normal ones are up to

15-16 liters per minute And the doctors here have acquired such devices, the therapy is applied to certain people who need such treatment before intubation, and they further lead to an increase in consumption, “explained Martin Dimitrov.

And the maximum amount of oxygen that hospitals have claimed in the peaks before has almost been reached. At that time, about 1,000 tons were delivered per week. Only Dimitrov’s company delivered 650 tons together with the quantities from Romania, and now – 400 tons per week, as much as its own capacity.

The largest increase in consumption is in Sofia. In Alexandrovska Hospital, for example, before they wanted

so much a day

Tokuda is also growing – from 10 tons per week, now they order the same amount every other day. 9 tons per day are used in the largest emergency hospital “Pirogov”, and in the capital “St. Anna” – 3-4 tons per day.

In the Military Medical Academy there is also a double growth of the required quantities. They make requests every other day, and 2 weeks ago requests were made twice a week.

So far in Plovdiv and the district has not reached a situation where a hospital is deficient in oxygen, explained the director of RHI Dr. Siika Dimcheva.

“We have set up a special organization where the hospitals notify us a day or two earlier that they need oxygen. We immediately contact the ministry and BDA. Oxygen is delivered quickly. This happened over the weekend with two hospitals and on Monday with another. They immediately received the necessary quantities “, explained Dr. Dimcheva.

A similar situation, but some time ago they had in the Razgrad hospital. After signaling to RHI and MH, oxygen was provided very quickly. There, the needs also increased significantly – from 6 tons per week to 2 tons per day. The reason is that in recent days a total of 105 COVID beds have been discovered there, as many as the medical institution has not had in any of the waves so far, explained the director of the hospital, Dr. Gecho Zhekov.

Delay in the delivery of one of the hospitals in Stara Zagora there were 2 weeks, but the problem was also resolved in a timely manner. At the moment there were no difficulties, explained the director of RHI Dr. Stanimir Stankov.

There is no problem with oxygen supply to hospitals in Pazardzhik, Kardzhali and Smolyan. Problems are not reported in Burgas, but in the state UMBAL-Burgas, where most patients are treated, they produce oxygen themselves. In the fall of 2019

from which it fills all the necessary compartments via air outlets. In addition to its own needs, it also delivers Heart and Brain Hospital and KOC. Other hospitals in the area order oxygen from bottles from retailers, but there is no shortage of them either, although consumption has jumped many times compared to the previous three waves, the RHI said.

There are 20% more requests in Varna, but there is no problem with providing oxygen. Devnya is also home to one of the largest distributors of medical oxygen – Tsikonia OOD, whose suppliers are Messer Bulgaria EOOD and SOL Bulgaria.

Upon request with one day’s notice, the gas is delivered in bottles of 40 and 50 liters,

the price is BGN 3

per cube without VAT

Consumption has jumped 4.3 times in Veliko Tarnovo as well, but there is no problem with the supply there either.

Hospitals do not experience a problem with oxygen supply because manufacturers handle requests. They can produce a total of about 180-200 tons per day for the whole country, but in order to avoid shortages, they informed the Ministry of Health at the earliest stage.

According to information from “24 Chasa”, the companies reported the problem 2 months ago, but the Ministry of Health did not react, because the daily report of the RHIs in the country did not report a problem with the supplies. This was explained at the meeting yesterday by the Ministry of Health. However, the RHIs provide information on the current situation, which is evident from the inspection of “24 hours” does not show a problem. But they do not predict that as patients increase, so does consumption. And even if 40 tons are not enough per week, this means that 2-3 hospitals will be left without oxygen.

According to the manufacturers, the decision of the Ministry of Health to prioritize supplies to hospitals will significantly ease them and help them cope.

Outside of medicine it is used for food, in chemistry, clean and water

Oxygen has a wide application outside of medicine.

It is used in the food industry, in the mining industry, in metallurgy, in the chemical industry, ecology and others. Although oxygen is non-flammable, it improves combustion.

It is used in food packaging, to protect and control the air during storage of fruits and vegetables. Also when raising and transporting fish. Oxygen is also needed in the production of ozone, for disinfection and sterilization.

In the manufacture of paper it is used for bleaching. Oxidation of black liquor with oxygen limits the release of sulfur into the atmosphere. The enrichment of the combustion air in the lime kilns increases their productivity.

In the chemical industry, technical oxygen is used for oxidation of materials, partial oxidation of hydrocarbons, large quantities are used in the gasification of coal for synthesis gas. It is used to improve the flow in oil and gas wells and other processes.

It is also used to increase the capacity and efficiency of decomposition and destruction of hazardous waste and waste materials in waste incinerators, in the production and processing of metals, steel, copper, lead and zinc, in cutting and welding.

In wastewater treatment processes, oxygen is usually used in the biological treatment stage as a substitute for air and increases the treatment capacity.

In the treatment of waste, oxygen is used in the oxidation of chemically active waste in special facilities, which helps to dispose of it.

Oxygen is also widely used in the production of glass – to improve combustion in furnaces and collecting buckets, reducing nitrogen oxide emissions.

In water treatment or in the pulp and paper industry, oxygen is used in its allotropic form – ozone, in order to improve the reaction and ensure complete oxidation due to the higher reactivity of ozone.