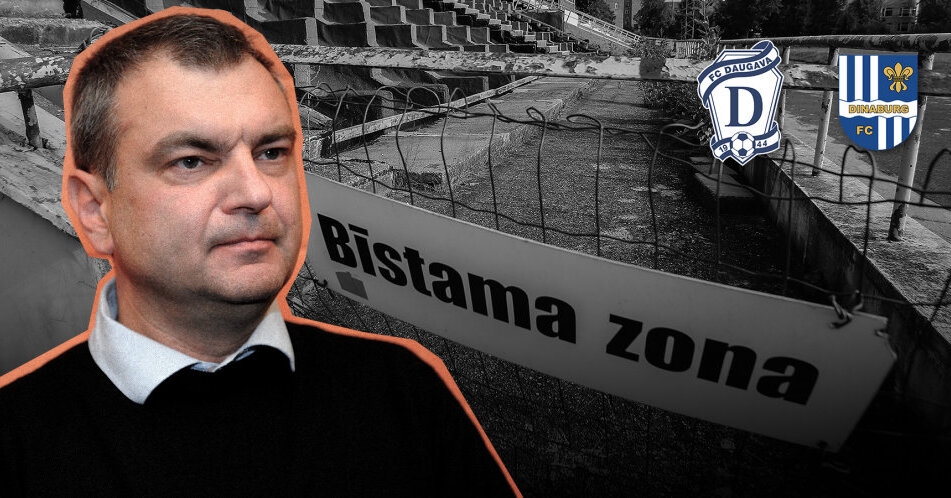 Oleg Gavrilov’s name is well known in Latvian football and sports. It once sounded louder even than the words of footballers and coaches, but with a negative connotation. He is the only person disqualified for life from Latvian football, after the punishment he noticed being close to Daugavpils football for several more years, re-arrested, but now he conscientiously spends several days every month in Daugavpils court, waiting for the verdict in his first case.

Although the interview had been arranged and the acquaintance had been carried out a few months earlier, before the conversation Gavrilov, with the addition of irony, asks who then sent the journalists and how much we were paid for it. He is disappointed – we have come to Daugavpils without “additional stimulation”, because Gavrilov’s name still “floats” in Latvian football from time to time. Caution is understandable, because he is still interested in law enforcement and presumably has a number of enemies. We do not check with a lie detector, nor do we try to find out if any listening devices are installed.

In a conversation lasting almost an hour and a half, we discuss Latvian football, Gavrilov’s entry into this environment, the reasons for the weak start of the national unit, we also try to touch on the awkward questions about “toto” things, but Gavrilov always asks to turn off the dictaphone. “Maybe another time – with the microphone on – I’ll tell you how things happened in Latvian football, but not yet,” says the 54-year-old man, who has been a club manager in football for almost two decades. During the conversation, it can be sensed that some public statements later paid off for the controversial Gavrilov. However, he is well aware that he was not the only one in this sport who sinned. This could also be one of the reasons for the rather cautious conversation. For now, the cautious …

The business of the 1990s and the millions invested by Gavrilov

Many people don’t know, but you used to play football yourself. What was the success? We read that you played in the final of the republic with Ilūkste youth team.

Yes, I played in Ilūkste. The youth team was in threes, fours. I played at the coach [Vladimira] Vinokurova. In the adult team I also played with Vinokurov. In the USSR, it was level B. Then I went to study at the Aviation War Institute (Jānis Fabricius Daugavpils Higher School of Aviation Engineering – aut.), Now I am an officer in reserve. I also played a little there, but I wasn’t already at the level to be on a normal team. I played with guys who were then, for example, in Riga’s “Daugava”. There was such an attacker [Pāvels] Trubačs, Vitalijs Vanins (uncle of Andris Vanins – author), Dzintars Babris, who now works in Ilukste. I don’t meet them, time is up. Hello, if I meet in the city, but most of them have left.

Why did you leave football?

I left football, I left war aviation. I returned to Daugavpils and started business. These were the famous 90’s. In 1996, I was 29 years old, and then I received the “Vilan-D” team as a “gift”.

What was the business like in Daugavpils in the famous 90’s?

It went pretty hot. We had a company with two “supermarkets”, there was also a transport company with 15 machines, a wholesale base, an oil transshipment company. There were cafes, restaurants – quite a serious business.

So how did you get back to football?

I was asked to help the Vilan-D team, which had almost sunk financially. I was told, “Help, then we will get UEFA money, there will be sponsors and you will get the money back.” I helped for a month, two, then half a year – but neither UEFA money nor a sponsor.

The president of Vilan-D was probably Sviridov. They later left the team, but I had started to help. I was told that at least then I would legalize the footballers so that the investment would not disappear. In the first year, I spent about half a million dollars. Salaries, bonuses, etc. We were in threes at the time.

Historical day for the Portuguese debt. Stocks and oil correct – Markets in a minute

Russian scientists have found a way to detect encephalitis at home – Ferra.ru

Trainer Villas-Boas: “Never use back number 10 as a tribute again”