novillada and corrida on Sunday September 27 in the arena 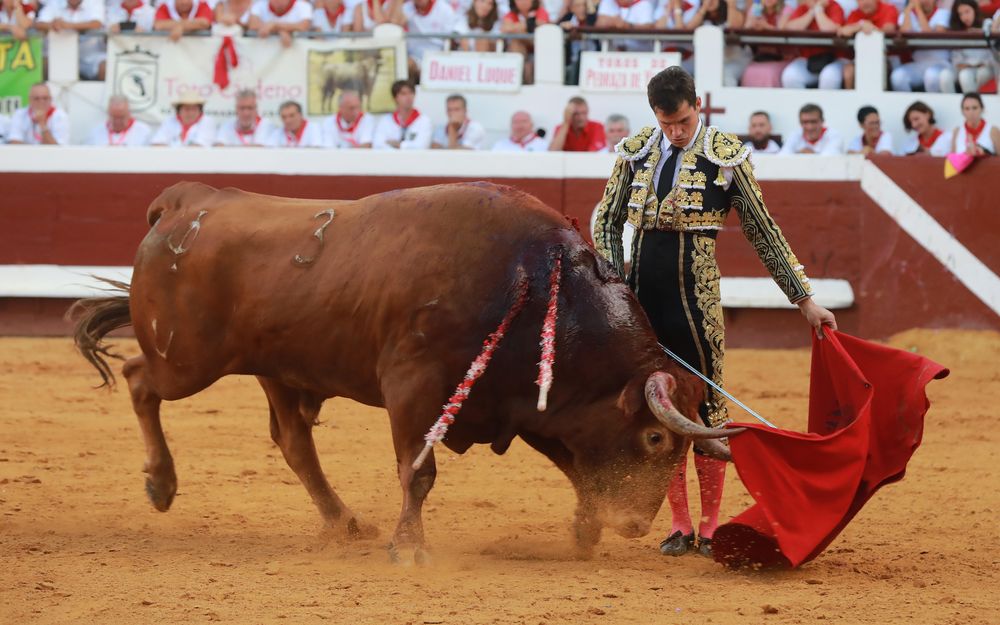 After organizing a bullfighting weekend in Béziers, Dacquois aficionados, especially those of the peña Alegria, had challenged the mayor of Dax, Julien Dubois, for encourage him to organize an event in the spa town.

It was done this Friday, August 20 in the morning since the mayor, accompanied by Pascal Dagès, deputy delegate to the festivals, and Éric Darrière, president of the bullfighting commission, announced the organization a pitted novillada and a bullfight, Sunday September 27.

The cattle of Pedraza de Yeltes will be in the spotlight of this day for the pique novillada (four novillos) on Sunday morning, facing Maxime Solera, Francisco Montero, El Rafi and José Fernando Molina, and the afternoon facing Daniel Luque, Alvaro Lorenzo and Lopez Simon.

To mark the occasion, the city of Dax went to search in the fund of his archives to find a poster that has been updated. We see a Sevillian woman offering a bouquet to a bullfighter, “it illustrates the support of aficionados”, slipped Pascal Dagès, deputy delegate to parties.

The poster for the bullfighting day organized in the arenas of Dax on Sunday, September 27, was taken out of the city’s archives. @South West @SO_Landes pic.twitter.com/fkR7DwJQPq

Due to the sanitary situation, only 4,000 seats per show will be put on sale. Wearing a mask will be compulsory in and around the arenas and a place must be left free between each person, including the same group. The exit of the arenas will be by level in order to avoid any congestion.

The mayor of Dax, Julien Dubois did not hide his satisfaction at being able to announce the organization of this event.

“We have worked to maintain hope by seeking all the solutions to manage to offer aficionados a day like this one because it is our desire to maintain the rank and the influence of our dacquoise place in the bullfighting environment. “

But he also recalled his responsibilities in respect of protocols and the protection of the population. “I have passions but also homework given the situation. On this day we therefore decided to go further than what the protocols impose on us that is to say that the mask will be compulsory in the perimeter around the arenas, throughout the duration of the shows and the refreshments will not be open. “

“Bullfighting is in danger of death”

Then, speaking of love, Eric Darrière, president of the bullfighting commission, took over to discuss the breeding chosen and the cartel. “The Pedraza de Yeltes have been coming to Dax since 2014 and each time it is a remarkable spectacle whose tickets always sell out in a very short time. It is a true love story that has been woven between the city and this farm which was very touched by the proposal in the form of a tribute that was paid to them. We look forward to seeing these toros, which are always very complete, in our arenas. “

On the side of the cartel and according to the president of the bullfighting commission, the novillada would find its interest in the fact that the four novilleros present are at the gates of the alternative therefore well armed to face the Pedraza. For bullfighting, we no longer present Daniel Luque, “marginalized by the Spanish bullfighting world, it is thanks to France that he has become what he is and that he finds himself in the first ranks in the arenas of his country. », Specified Éric Darrière.

But the latter insisted on concluding this announcement press conference with a reminder: “Bullfighting is in danger of death and if we relive a year like this, there will be no more bullfighting. We must therefore remember our pride in belonging to a culture and traditions, claim our passion and continue to believe in the ability of the toro to bring us together. “