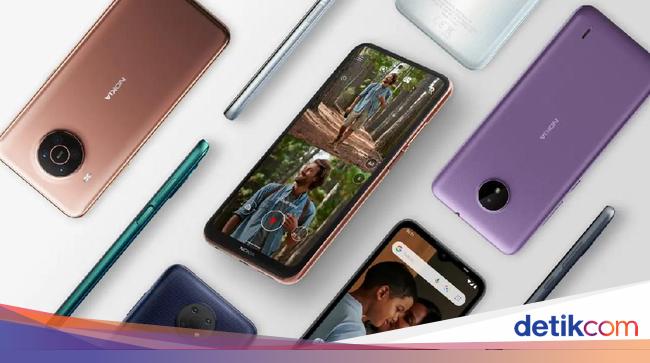 Both of these cellphones carry a screen with a water drop notch. Measuring 6.5 inches with HD + resolution. It has a 5 MP rear camera, while on the front it is embedded 5 MP.

The Nokia C10 is powered by the Unisoc SC7331e chipset, while the Nokia C20 capitalized on the Unisoc SC9863A chipset. The embedded RAM is 1 and 2 GB.

Internal memory options are 16 GB and 32 GB, if there is still a lack of a microSD slot is provided. While the battery capacity is 3,300 mAh with a 5W charger.

These two Android Go-based cellphones still use a microUSB port and a 3.5mm audio jack. Only the Nokia C20 supports 4G, while the Nokia C10 is still stuck on 3G.

Nokia C20 comes in Dark Blue and Sand. The options provided include 1GB + 16GB and 2GB + 32GB and with prices starting from 89 euros (IDR 1.5 million). Both will be launched in the global market starting next June.

Switch to the Nokia G10 and G20both have 6.5 inch screens with HD + resolution. Got a water drop notch which houses the 8 MP camera.

If the Nokia G10 is equipped with the MediaTek Helio G25 chip, the Nokia G20 has a MediaTek runway Helio G35 which promises the seamless gaming experience possible on entry level phones.

The Nokia G series duo is equipped with a battery with a capacity of 5050 mAh, a 10W charger, support for a USB Type-C port, still has a 3.5mm audio jack and is certified to be IPX2 water drop resistant. Nokia made a fingerprint integrated power button.

The Nokia G10 comes in Night and Dusk color choices. Have 3GB + 32GB and 4GB + 64GB configurations. The price of the Nokia G10 starts at 139 euros (Rp. 2.4 million) and will be launched globally from the end of April.

Nokia G20 Price starting from 159 Euros (around USD 2.7 million) and will be rolled into a number of global markets starting this May.