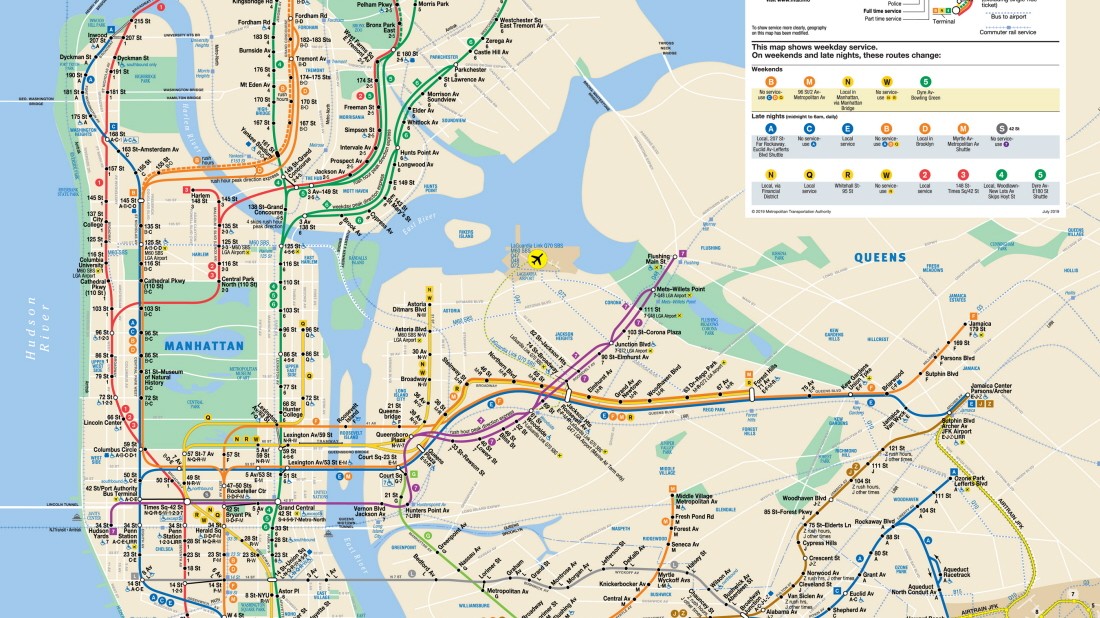 “It’s always nice,” said Michael Hertz once New York Times“When I see someone in leather pants studying my map at a subway station.”

In theory, this could also be said by Leonardo da Vinci, whose “Mona Lisa” in the Louvre is still admired from the Lederhosen perspective. Not that one would like to equate Michael Hertz, the designer of the New York subway plan who died a few days ago at the age of 87, with Leonardo da Vinci – but about him NYT obituary to quote on him:

“Mike was a giant in mapping circles.”

When giants die, you can let yourself be shaken. Especially when their works are so iconic and public that you inevitably end up in the Mona Lisa comparison. Michael Hertz, whose graphic office developed the “New York City Subway Map”, which is still valid today as a graphic as pointed as it is informative, as early as 1979, is perhaps even the man who is the collective memory of one of the largest and most beautiful cities in the world like nobody else has shaped.

When you close your eyes

Anyone who, as a lover of public transport systems or as a tourist, closes their eyes and thinks of New York, thinks not only of the selfie hotspots from the Empire State Building to the Brooklyn Bridge to The Vessel. You also think of the subway and think about how to get from one place of interest to another place of longing as easily as possible.

The visually memorable and almost congruent connection of the underground tracks to the structures above ground: That is the real achievement of the Hertz Plan. This is another reason why the New York subway map has already made it onto posters, coffee mugs or T-shirts: it is not just an infographic of the infrastructure, it is a cipher of the city and the attitude to life in it.

As Michael Hertz, born in Brooklyn and since 1954 with a Bachelor of Fine Arts (Queens College), created an aesthetic that still radiates all over the world more than forty years ago, the man who once worked as art director for Walt Disney had a problem. The map, which was already available as a diagram and whose proportions defined the formats for the plan frames in the trains and stations, had a lot to do with an ideal infographic, but little to do with the real city topography.

The diagram came from the Italian designer Massimo Vignelli, was introduced in 1972 and even made it into the Museum of Modern Art with a modernist design. But the idealized one Vignelli-Karte was ultimately surreal in nature. For example, the elongated rectangle of Central Park appeared on it as a square, the watercourses of which were not blue, but beige. One simply couldn’t get a picture of New York itself by looking at the New York subway map.

“Knead, bend and compress the card”

Hertz changed this and also corrected the proportions of the Vignelli specifications, which, as a new graphic, should still fit into the old frames.

“We had to”, he later recalled, “knead, bend and compress the card.” So that the map fits into the frame and the city fits into the map. Truly: a giant. Because his plans, which marked the sights for the first time, were as well received by knowing New Yorkers as they are by ignorant strangers, they are in principle still valid today.

That alone doesn’t explain why a simple subway map could become so iconic.

There is also the boom of infographics as the ideal medium of a society that is on the one hand globalized and on the other hand digitally organized. Although the visual transfer of knowledge is anything but a child of the modern age – the archives are full of ancient cosmological or religious diagrams. To get an idea: This is an art that is thousands of years old.

Infographics are particularly topical right now – as visually, i.e. also sensually comprehensible forms in which information, data and facts can be coded, but also deciphered, in the simplest possible way. Cross-linguistic and translatable into any culture in the world.

Everything is clear on the map

Infographics also simplify a worldwhich in truth is getting more and more complicated. A look at a subway map, which is also a topos of the urban and smart mobile city society, therefore harbors a consolation in addition to this paradox: no matter how incomprehensible the world up there is, down here, on the map all right.

This is another reason why the subway plans from Munich to Paris to New York and Beijing are not just tourist challenges, but also final certainties and fashionable emblems rolled into one. Reading them is an act of localization and affirmation. That may seem naive, but the naivety of the plans is what is genius about it. To paraphrase Brecht and his “Ballad of the Inaccessibility of Human Planning”: “Yes, just make a plan!”

Ultimately, the plan will not explain the world to you, it will only show you the code of it – but if he does it in such a touching way to create an identity as that of New York, then Michael Hertz can not only be seen as a giant, but also as Leonardo da Vinci Describe the underground.

Pennsylvania: Biden is the winner | Abroad

“I’ve made the decision, I’m going”