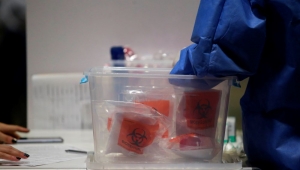 Washington, Apr 6 (Sputnik) – The new variant of the new coronavirus that emerged in India, called a “double mutant,” was found in the San Francisco Bay Area (US, west) by the Stanford Clinical Virology Laboratory, reported on Monday the local press.

According to a report by the New Mercury News, at least one confirmed and seven suspected cases of the Indian variant have been found after testing Stanford patients.

The new Indian variant is said to have two concerning mutations in a key part of the SARS-CoV-2 virus that helps it adhere to cells, explains the report, which quotes the laboratory’s medical director, Ben Pinsky, as saying the cases detected “demonstrate the rapid spread of this variant.”

Earlier this month, the Indian Ministry of Health said authorities detected a new type of the new coronavirus, which emerged in late December 2019, with E484Q and L452R mutations in the S protein.

Authorities assume there is a link between the new variant and the 55 percent increase in the number of cases in India over the past week alone. (Sputnik)