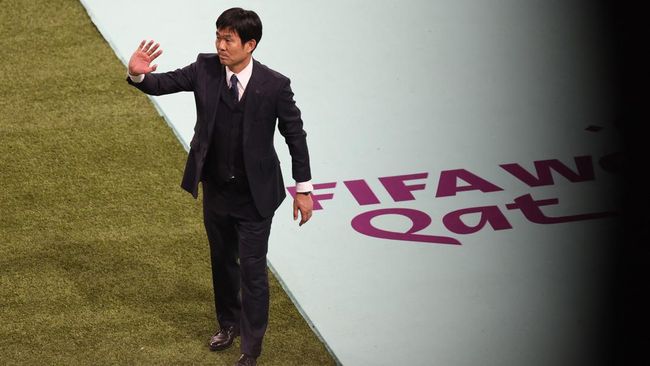 Japan national coach Hajime Moriyasu he still gives great appreciation to his adopted children even if they have to be done away with World Cup 2022. Japan return home after losing on penalties to Croatia, on Monday (5/12).

Hajime Moriyasu sees Samurai Blue’s trip to this year’s World Cup as a big dream. He admits he sees a brighter future for Japanese football.

“We played for 120 minutes and they took the penalty very bravely. I want to commend their effort, they worked under a lot of pressure,” Moriyasu said after the match, quoted by Reuters.

“Obviously we wanted to win and the result was unfortunate. We failed to break through the barrier of the round of 16, but the players were able to showcase a new generation of Japanese football,” he said.

According to him, the trip during the opening of the World Cup sharpened the Japanese team. They were able to beat a number of countries with the best players in the world.

“We beat Germany and Spain, both World Cup winners. We have to be confident in our abilities. I think there is a different future for Japanese football.”

Japan’s failure to break into the round of 16 is a record for the fourth consecutive time in any World Cup event.

Previously, Japan had lost to Turkey, Paraguay and Belgium in each round of the round of 16. This fourth loss has left a number of players devastated.

“Every day for four years we have worked hard to break down this barrier but we have not been able to get the result we wanted. This is very difficult to accept,” said Captain Maya Yoshida.

“The result of the penalty cannot be blamed on anyone. The problem is that we couldn’t finish the match in 120 minutes,” said winger Ritsu Doan.

“I think the regret we feel about this defeat will lead to something better in the years to come,” he said.