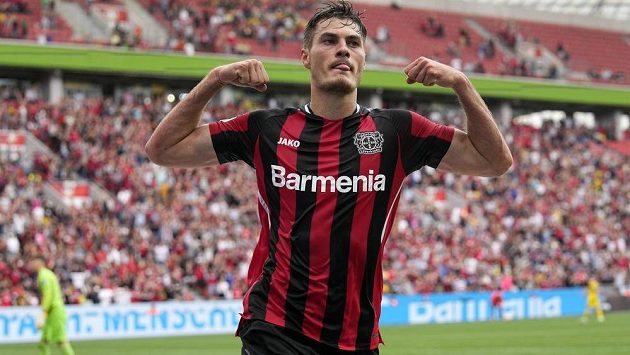 Patrik Schick celebrates the goal of Leverkusen, who scored in Dortmund’s net.

Leverkusen came out empty-handed for the first time in the Bundesliga year, although he led three times. Twenty-five-year-old Schick adjusted the score to 2: 1 in the first set minute of the opening act, when after the pass of the author of the home goal of the home team, Wirtze finished on the far post.

Shortly after the break, Brandt equalized after Haaland’s assistance, after which Diaby succeeded Bayer. The Westphalian team turned the situation between 71 and 75 minutes. First he leveled Guerreiro and then Haaland converted the penalty. Borussia won the third of four rounds.

Just as successful as Dortmund is Mainz, whose victory at the Hoffenheim court was decided by Burkardt and Ingvartsen. The healed Kadeřábek started from the second half, before that he last played in the jersey of the Czech national team in the eighth finals of the European Championship with the Netherlands on June 27.

Cologne took the lead in Modeste in the 34th minute, finishing with Kainz in the 74th minute. The 21-year-old national team Ostrák came on the field in the 82nd minute and scored his second start in the German league. Freiburg scored at least one point thanks to Czichos’ own goal from the 89th minute.

Wolfsburg took the top of the incomplete table, winning 2: 0 on the newcomer to Fürth and scoring fully in the fourth round. For the visitors, Nmecha won the duel and in the very end from the penalty kick Weghorst.

Union Berlin drew at home with Augsburg without goals and maintained the league’s invincibility, but scored his third draw. On Thursday, in Prague’s Eden against the championship Slavia, he will have an introductory duel of the basic group of the European Conference League.

Augsburg is still waiting for the first win in the league year.