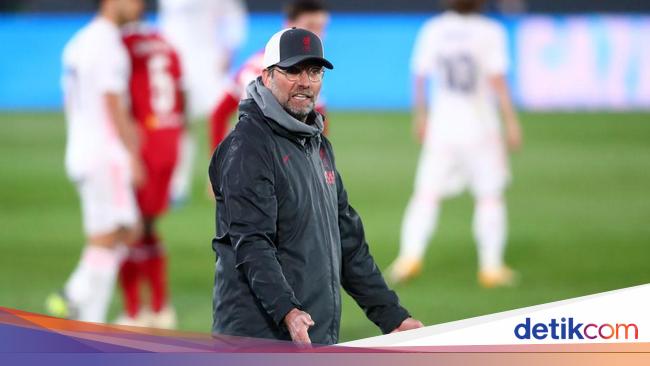 Liverpool to swallow the defeat of Real Madrid in the first leg of the Champions League quarter-finals. Manager Jürgen Klopp then insinuated the Los Blancos headquarters?

Liverpool travel to Estadio Alfredo in Stefano, Madrid, Spain, Wednesday (7/4/2021) in the morning WIB, in the first leg of the Champions League quarter-finals. The Reds lost 1-3 on the trip.

Since the first half, Liverpool were made 0-2 behind after goals were broken into by Vinicius Junior and Marco Asensio. The visitors were only able to reply to one goal through Mohamed Salah in the second half, but Vinicius was able to break the net again.

After the match, Klopp assessing that Liverpool will try to retaliate in the second leg, which will be held at Anfield, England, (15/4). The manager admits it will be difficult without the presence of supporters.

“Of course, it’s very different. It’s totally different. If you want to have emotional memories then watch the Barcelona game again and 80 per cent of the game is the atmosphere in the stadium. So, yes, we had to do without it,” Klopp said in a statement. Liverpool’s official website.

‘But it’s not that I sit here and think,’ Comebacks are our business, we do it all the time. ‘ We do it from time to time, but we always have supporters in the stadium. We don’t have it later, so I don’t know if we can do it, but I can promise you that we’ll give it a good try. “

Read Also:  Dele Alli threatened and injured by burglars with a knife

“The players wanted so badly, but today in the first half, we couldn’t for whatever reason and we couldn’t do it, so that’s what we have to find out, change it, and then try again,” said Klopp.

“It must be a very difficult task for Real Madrid at Anfield with or without supporters. Here tonight is very strange, very difficult, a different situation with the stadium, but Anfield is at least a decent stadium and it will be good for us,” he added.

Alfredo di Stefano Stadium is not the main home Real Madrid, it’s the training ground. The Santiago Bernabeu Stadium, its main headquarters, is currently being renovated.