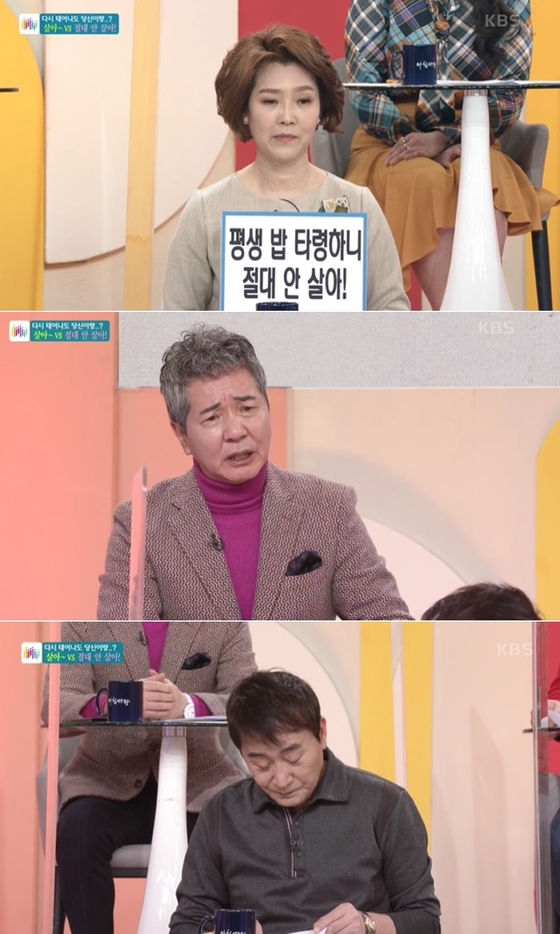 Wang Jong-geun, an announcer’s wife, Kim Mi-sook, expressed her dissatisfaction with her husband.

On KBS 1TV’Morning Madang’, which aired on the 19th, a talk was held under the theme of’I will never live with you even if I am born again’.

On this day, Misook Kim declared a bomb saying, “This is our relationship. We will only live with Bob Taryeong’s husband until this lifetime.”

Kim Mi-sook said, “I know talking about rice is childish, but I have a lot to say about’Babbapbap’. My husband, Wang Jong-geun, seems to think that I am a machine that cooks for me.” You have to listen to the story of’Is my rice ready?’” he revealed.

He then confessed, “I often go to Busan to see my mother, but if I go for a few weeks, I have to prepare the rice, side dishes and food in the refrigerator for that time.”

In addition, Kim Mi-sook said, “When I go to meet my friends, I start preparing meals, but sometimes the phone box is on fire. I am sick of cooking.”

In response, Choi Byung-seo condemned Wang Jong-geun, saying, “What kind of rice do you ask for? If you want to eat it, eat it yourself.” But actor Nam Neung-mi said, “What is so difficult to serve you? Even though I’m at this age, I’ll give you three meals a day for breakfast, lunch, and dinner, as well as all the snacks when my husband accompanies me.” I am happy,” he said.

In addition, Wang Jong-geun confidently said, “It’s been 10 years since I did the dishes every day. How many dishes must I have done?

Read Also:  the singer delivers himself in detail on Instagram

Meanwhile, Jinsung said that he would live with his wife even if he was born again, saying, “What men misunderstand is that you need to learn a recipe that you can cook yourself. In the case of me, because I look like a man, I know that I will hold the weight when I go home. I solve everything myself. Asking for food can also be a comment that hurts my pride. What kind of era is it now? It’s better to eat myself than to tell my wife to eat food.”