The former company boss Martin Hofweber is the offspring of the beer dynasty J. Hofweber & Cie. A few years ago he handed over responsibility and the presidency of the largest brewery in the canton of Bern to his daughter Andrea Dähler-Hofweber and has been honorary president ever since. The Jungfrau Zeitung visited him at his Reichenbach Castle in Zollikofen near Bern. Conclusion after the visit: The Rugenbräu story is an interesting family story.

The Rugenbräu senior boss is happy about the new beer called “Hopfenblüte”, the first wheat beer in the Rugenbräu range.Photos: Noemi Hodler

It was a wild time down in the Reichenbach near Zollikofen. At the beginning of the 1950s, the “Giele” played in their school free time on the Aare and around the castle “Indianerlis” – and they were allowed to say so at the time. The oldest “Indian” was Dimitri Jakob Müller, who had moved from Ticino. After his compulsory school time and the tenth year of school he completed a pottery apprenticeship with the artist Margrit Linck in her studio, which is located directly next to Reichenbach Castle. Then Dimitri changed his subject and became world famous as a clown. 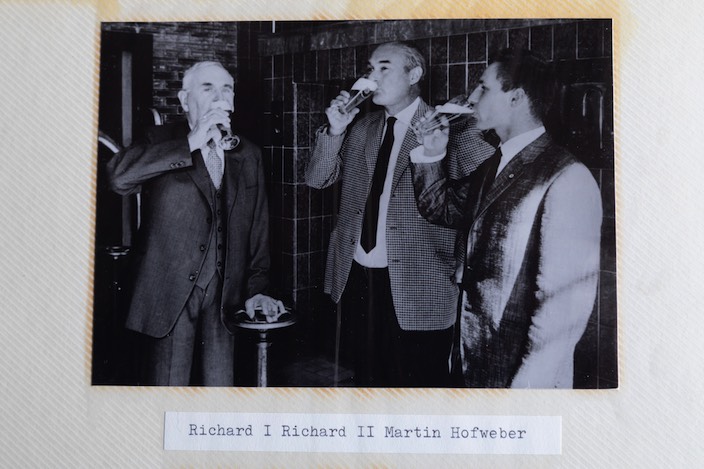 A look at the family album: the junior brewer Martin Hofweber together with his grandfather and father.Photo: zvg

Have a beer with the clown Dimitri

The youngest “warrior” was Martin Hofweber, son of the castle owners’ family and offspring of the brewing dynasty J. Hofweber & Cie., Which brewed beer both in Reichenbach Castle and in Großer Rugen. Martin became a beer brewer like his father, grandfather and great-grandfather. After his apprenticeship as well as several years of apprenticeship and traveling, Martin Hofweber trained as a master brewer at the Marktschwabenbrauerei Widmann in Bavaria and took over the family-owned brewery in the 1970s. 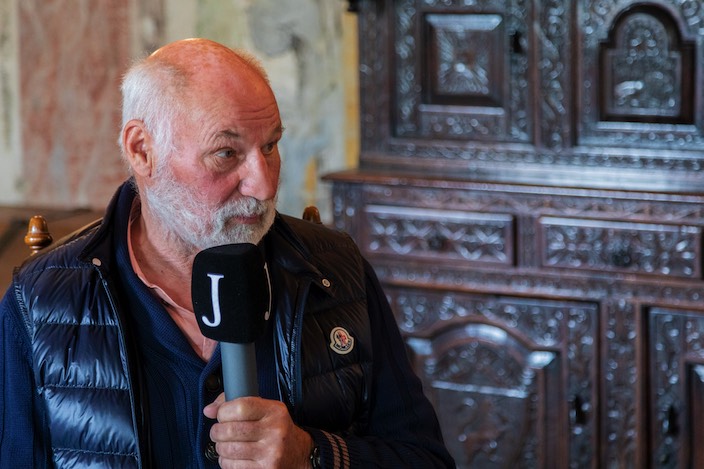 Martin Hofer during the summit in the knight’s hall of his castle.

“Many years later I saw Dimitiri again,” remembers Martin Hofweber, “I was sitting in the front row at a performance, he recognized me immediately and greeted me from the stage with an improvised interlude.” After the performance, the two “blood brothers” from Reichenbach had a drink at the bar. “We drank beer, of course!” Emphasizes the Rugenbräu boss. 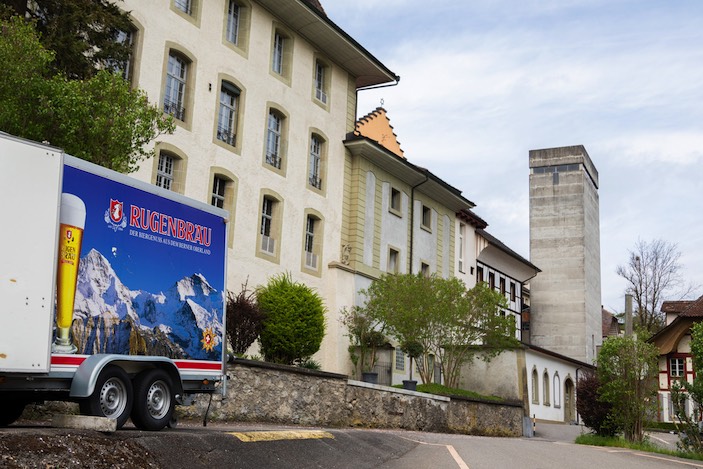 The buildings attached to Reichenbach Castle over the years testify to the development of architecture, which is not necessarily pleasing to the eye …

Martin Hofweber is the Rugenbräu archive made human

Martin Hofweber receives the Jungfrau Zeitung in the knight’s hall of his castle and reminisces. “Dr Tinu”, as the world calls him, is not “only” the patron saint of the largest family-owned brewery in the canton of Bern, but at the same time the archive of his family history that has become human. With “Tinu” we dive into the chronicles of the Hofweber and Fischer families as well as those of the castle and the brewery: In 1688, Beat Fischer, the founder of the Bernese postal service, had a baroque castle built in place of the medieval castle. The baroque painting of the courtroom, later the knight’s hall, where the Jungfrau Zeitung and Martin Hofweber are staging the summit, also dates from the period from 1688 onwards. 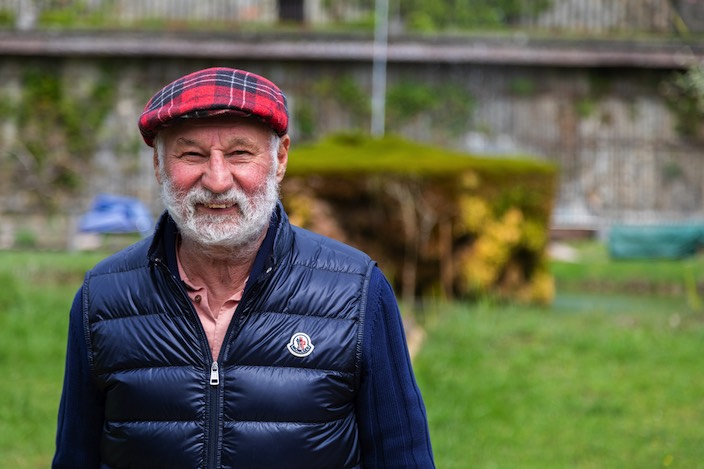 Martin Hofweber is the honorary president of J. Hofweber & Cie.

The castle became a palace

The former castle most likely went back to a Roman military bastion, the remains of which “greet” with the Roman bath and the amphitheater on the Bernese Engeh peninsula as witnesses from this time that can still be seen today. In addition to converting and expanding the medieval castle into a castle in its current form, Beat Fischer also had terraces supported by walls and an extensive garden in the French style built, which extended to the banks of the Aare, where a retaining wall in turn built the Forms demarcation to the river. “This wall collapsed recently, and now, during the reconstruction, the remains of pile dwellings were discovered”, says Martin Hofweber with some very interesting reports. His family seat is therefore possibly based on the Copper, Bronze and Iron Ages. In view of the fact that ten years ago the UN cultural organization Unesco recognized all 111 recognized pile-dwelling settlements in the Alpine countries, 50 of them in Switzerland, as world cultural heritage, the chronicle of the Reichenbach castle area is likely to be enriched with more history in the future. 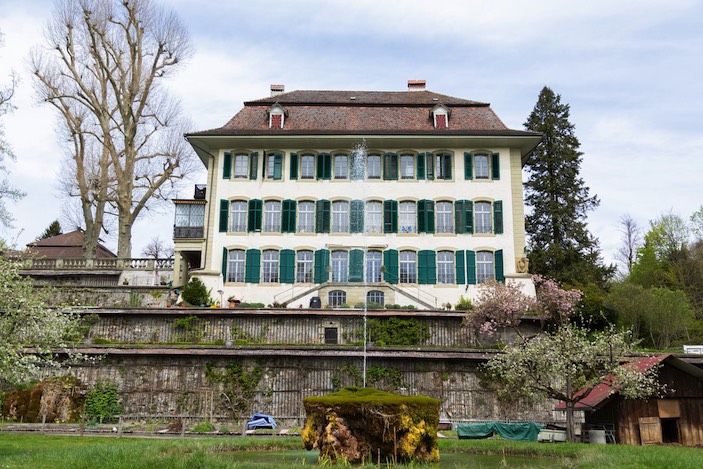 Reichenbach Castle in Zollikofen is the headquarters of the court weavers.

From letter mail to beer cheers

Around 1719 several outbuildings were built on the castle grounds, including a brewery north of the castle to refresh the mostly Bavarian postmen. The Fischers, meanwhile elevated to the rank of imperial knighthood by the Habsburg Emperor Leopold I, or new: von Fischers lost their sovereignty over the Bernese postal shelves in the transition from the Bernese patriciate to the liberal constitutional state from 1838 and from then on they relied fully on the art of brewing beer. 52 years later the von Fischers sold the brewery together with the entire castle complex to the Bavarian master brewer Joseph Hofweber, who two years later also acquired the Indermühle brewery in Interlaken, which he had already leased. In 1968 the merger of the Hofweber breweries in Reichenbach in Zollikofen and those in Interlaken and Matten became Rugenbräu AG. From 1971 onwards, Hofwebersche beer was only brewed on the Bödeli, and the former brewery building near Reichenbach Castle has served as a Rugenbräu depot for the Bern region ever since. 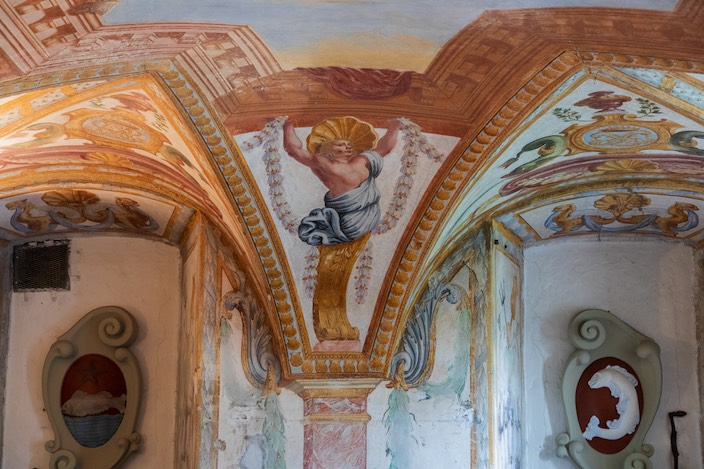 The paintings in the great hall of Reichenbach Palace exude the spirit of Versailles.

Martin Hofweber is happy about the latest Rugenbräu creation

The “Zum Schloss Reichenbach” restaurant is now housed in the building of the castle’s former orangery, which was built around 1719. Martin Hofer invites the Summit crew to enjoy the recently launched new Hofweber creation called “Hopfenblüte”. The company’s first wheat beer bears the label “Brauer Edition No.02”. Even today, many years after handing over the baton to his daughter Andrea Dähler-Hofweber, Martin Hofweber can still look forward to all the innovations at Rugenbräu AG: “I will remain a brewer with body and soul,” says the young at heart, former Chairman of the Board of Directors of the Hofweber company empire , which, in addition to the brewery and the castle complex, includes numerous apartment buildings as well as six own restaurants and around 300 contract restaurants. Speaking of Rugenbräu restaurants: Martin Hofweber continues to frequent many Rugenbräu bars between the Bernese Oberland and Solothurn. “Maintaining relationships with the hosts is the be-all and end-all of success,” he is convinced, even when private life can sometimes suffer as a result. “I was always married to the pub,” says the senior beer boss, who is married in his second marriage. 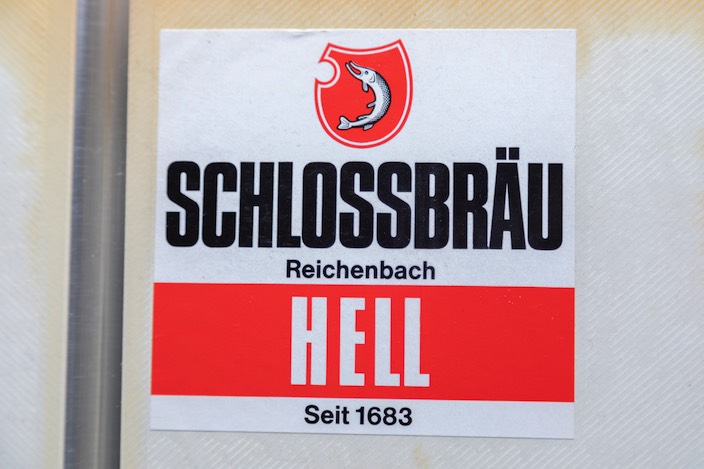 Up until the beginning of the 1970s, beer was also brewed in Reichenbach Castle.

The far-sighted grandfather paid off the numerous relatives

The secret remains how – considering the eight children of Martin Weber’s great-grandfather – an only son managed to get hold of almost all the shares in J. Hofweber & Cie for himself. “My grandfather had a plan and the patience to buy all relatives’ shares over time,” says Martin Hofweber, revealing the secret behind the fact that he and his daughter now own around 90 percent of the shares. 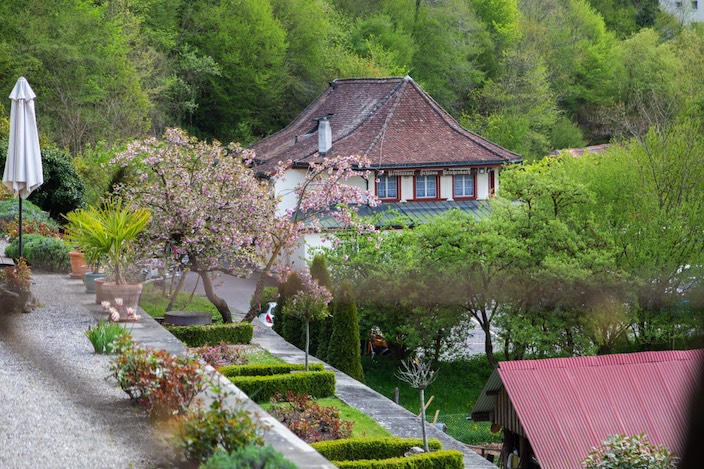 View from Reichenbach Castle to the “Zum Schloss Reichenbach” restaurant below.

Last late summer, Martin Hofweber celebrated his 80th birthday, discreetly without any fuss, which is not only due to the corona restrictions. Because the Rugenbräu honorary president loves the discreet appearance. He often appears in an industrial blue “Abwarts-Schurz” at a court weaver’s property and does local work there. And in the same outfit, he can be seen from time to time on the large terrace in the “Zum Schloss Reichenbach” restaurant to pull weeds there. No outsider would suspect that the guy with the squirt can on his back would be the lord of the castle and the “lord of the beers”. Rather, when you look at the bearded man with the constant mischievous smile on his face, one thinks of a never-aging rascal who used to hatch some pranks down here by the Aare and around Reichenbach Castle.

Rugenbräu has been brewing beer in the Bernese Oberland for generations

The origins of the company go back to a brewery with a distillery, which the Grand Councilor Christian Indermühle from Kiesen built in 1866 on the Gasthausmatte of the Gasthof Hotel Interlaken. After his death, his sons Carl and Albert took over the brewery and built Felsenkeller im Rugen to store the beer in 1875.

In 1880 they had to sell the brewery and with the help of the Bern Cantonal Bank it was converted into a public limited company. Their properties were acquired in 1892 by the Bavarian master brewer Joseph Hofweber, who had already bought the brewery in Reichenbach Castle near Zollikofen two years earlier. In 1895 a brewery was built above the vaulted cellar in Grosser Rugen and production was completely relocated to it. The Bavarian brewery in Interlaken was shut down.

In 1971 the brewery in Reichenbach Castle was closed. However, since 1988 their premises have been used again as a depot for the greater Bern area. Rugenbräu AG is still family-owned today. Honorary President is Martin Hofweber, born on September 13, 1940. His daughter Andrea Dähler-Hofweber is President of the Board of Directors, Remo Kobluk is the Managing Director.

I Don’t Deserve To Be Called High Priest

Atlanta Hawks made an incredible comeback against the...

This is how TV advertising works compared to...

a call to assessors!

sledgehammer on the head of the Clippers, and...

Positive samples for COVID-19 are again below 1%...