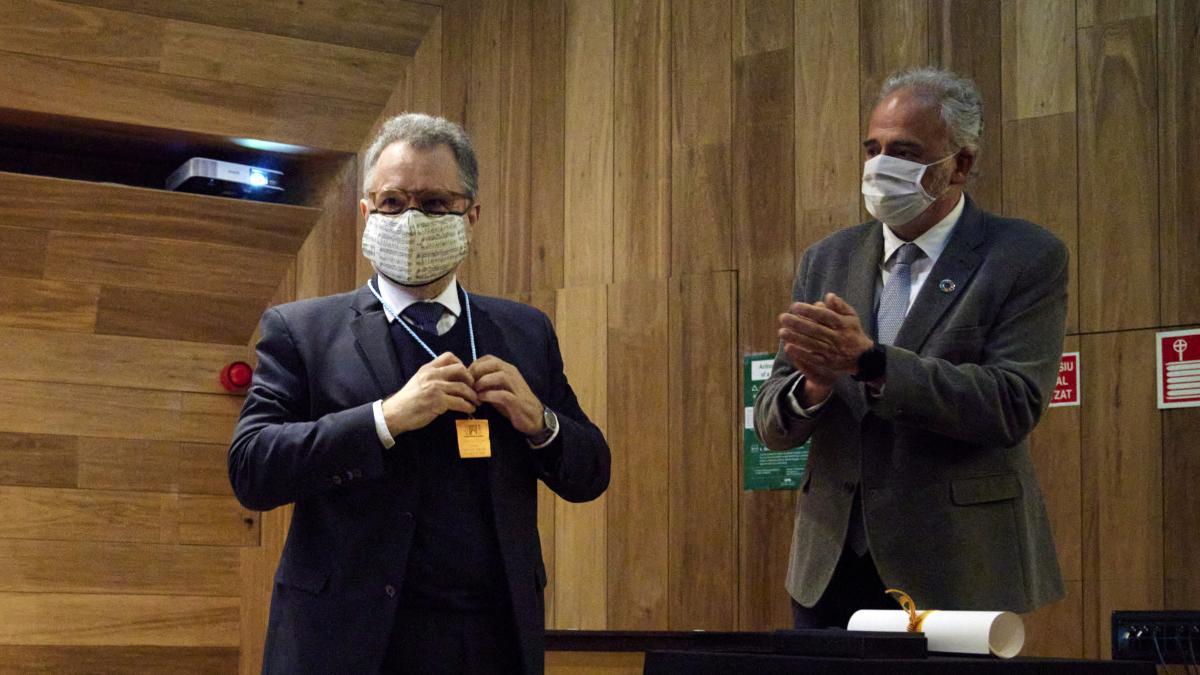 The Autonomous University of Barcelona (UAB) has incorporated the musical director of the Gran Teatre del Liceu, Josep Pons Viladomat, into its faculty. In a ceremony held on Wednesday, April 7, the rector, Javier Lafuente, invested the musical director as an honorary doctorate, at the request of the University’s Faculty of Philosophy and Letters.

Born 64 years ago in Puig-Reig (Barcelona), Josep Pons is one of the most recognized conductors of his generation. Summarizing his career is a challenge, since he has been dedicating his life to music since he was admitted to the Escolanía de Montserrat at the age of 8. Since then, he has been director of the City of Granada Orchestra and the National Orchestra of Spain, among others, and founded the Orquestra de Cambra Teatre Lliure, in 1985, and the Jove Orquestra Nacional de Catalunya, in 1993. He also served as director Executive musical of the ceremonies of the 1992 Barcelona Olympic Games. Since 2012 he has been the director of the Orchestra of the Gran Teatre del Liceu and, since yesterday, doctor ‘honoris causa’ by the UAB.

The distinction addressed to Josep Pons has been awarded because of “his commitment to the Catalan music scene; his contribution to the recovery and dissemination of the Hispanic musical heritage; his support for both contemporary composers and new generations of instrumentalists; the creation of innovative and excellent projects; and his effort to bring music to the new audiences of the 21st century ”, as confirmed in what was the first face-to-face event (with restrictions) of the University, after the pandemic.

The godfather in charge of laudation, the professor of the Department of Art and Musicology of the UAB, Francesc Cortés, qualified Pons with six merits that he shares with the University: the search for quality, the commitment to modernity, the constructive spirit, the social implication, the projection international and youth promotion.

I firmly believe that we can acquire knowledge through art “


After receiving the diploma and medal from Lafuente, the doctoral student gave the 200 attendees of the event, and those who did so for streaming, a master class entitled “Qui soc. Com soc. Què faig ”(Who am I. How am I. What do I do). In it he explained his “creed”: “I firmly believe that through art we can acquire knowledge.” In this way, he assured that “art instills knowledge” and that he believes in its need, “but even more so in the period in which we live, as the only remedy that can get us out of simplifying dualisms.” “I believe in the magic of Art and Music,” he continued, ending with a resounding: “I believe in honesty and commitment as pillars that allow” to be “and not” to seem that I am. ” His lesson also featured “dispassionate” reflections on his profession: “a good conductor will not be until he is able to listen to the score with his eyes and read it with his ears.”

The event continued with the screening of a fragment of the Gran Teatre del Liceu Symphony Orchestra, conducted by Pons, performing Sorcerer Love, by Manuel de Falla, and ended with the Gaudeamus Igitur. The entire act can be viewed in streaming via YouTube.