Insinuating Mbappe who canceled to Madrid? This is Benzema’s clarification 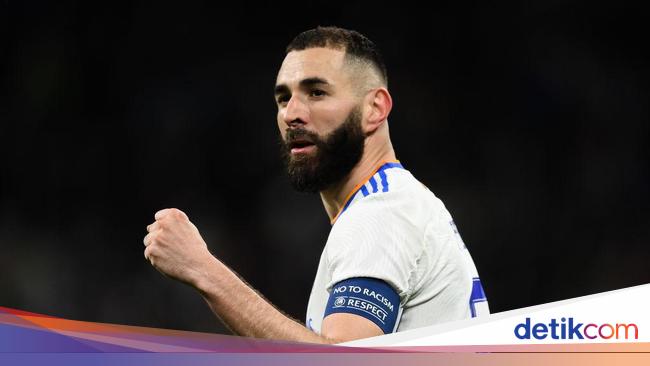 Karim Benzema is said to make satire for Kylian Mbappewhich is canceled to Real Madrid. This is the Los Blancos striker’s explanation.

Mbappe decided not to go to Madrid, and stayed at Paris Saint Germain. In fact, the 23-year-old striker has long been the target of the LaLiga giants.

This season, Mbappe’s chance to Madrid is wide open. After last year’s failed move due to being detained by PSG, the player’s contract will expire so there are no obstacles to moving to Spain.

However, Mbappe made the decision to stay in Paris until 2025. Allegedly, a mega contract from Les Parisiens, who dared to pay him 100 million Euros per season plus was given the authority to manage the team, was the reason Mbappe chose to stay.

Benzema, the Madrid striker, previously supported the rumors of Mbappe’s arrival at the Santiago Bernabeu. Understandably, Benzema is Mbappe’s senior in the French national team.

Several times Karim Benzema stated that he would be happy if his juniors came to Real Madrid. Until finally the situation was the opposite, Benzema then made an upload on social media.

Mbappe uploaded a photo of rapper Tupac Shakur, which is considered to symbolize a betrayal. Many judged that the upload was a ‘message’ from Benzema who felt betrayed by Mbappe, who decided not to move to Madrid.

Benzema then responded to that. The 34-year-old striker denied his posts on Instagram were satire, saying he was only focused on Real Madrid, who will compete in the Champions League final this weekend.

“Treason? Why? Everyone needs to focus on other things. Mbappe and other players have no reason to contact me. Everyone has the right to determine their own future,” Benzema told Diario AS.

“I’m relaxed, just thinking about Saturday’s game [final Liga Champions]. Everyone has a business. Am I surprised? Obviously, like everyone. But he’s a Parisian, and we have a game this weekend.”

“The photo is not for Mbappe. I posted it because I love Real Madrid. It’s not about betrayal or anything. For a month and a half I posted a photo of Tupac, which is my favourite.”

“It’s not a photo that contains a message. If I had a message, I would go to that person. Madrid is the best club in the world, but it’s not a message. I just want to show who we are and we have to win the Champions League,” Benzema explained.

This weekend, Real Madrid will fight Liverpool in the final Liga Champions. Incidentally, the match will be held at the Stade de France, Saint-Denis, France, Sunday (29/5/2022) early morning WIB.