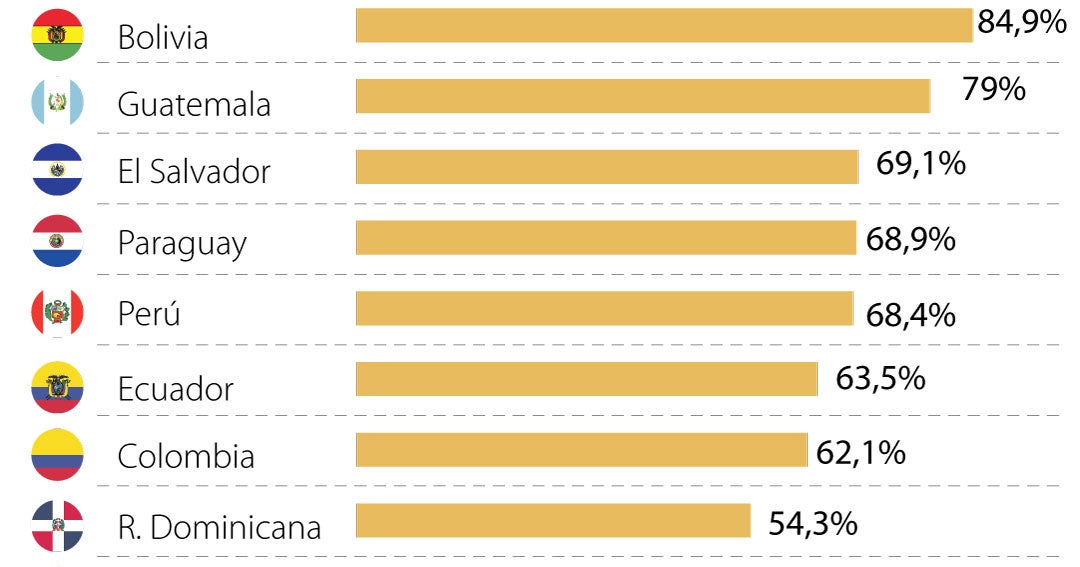 The havoc keeps appearing that left the pandemic during its first year, and the International Labor Organization (ILO) released some figures on the impact of the virus on labor informality in the region.

According to the entity, in Latin America and the Caribbean there are at least 158 ​​million people working in informal conditions, which represents about 54% of all workers in the region.

Along the same lines, there are about nine Latin American countries in which the informal labor force represents more than half of the total number of people who work.

Now yesLooking at the global picture, the ILO revealed that about 90% of the workforce in low-income countries fell into informality during 2020. For middle-income countries, the figure was more than two-thirds.

Although the figure is a general context, it should be noted that within the total of 48 economies in the region, there are four low-income countries and 14 lower-middle-income countries.

According to Carlos Sepúlveda, dean of the Faculty of Economics of the Universidad del Rosario, it is necessary to “take very seriously the alerts that are being presented in Latin American countries, such as Ecuador and Chile, in order to understand phenomena such as informality, particularly in the different regions and , in this way, provide more effective solutions ”.

Taking the above into account, the International Labor Organization presented a list of the countries in the region with the highest percentages of informality at the end of 2020.

In the head Bolivia was ranked in the ranking, with an informality percentage of 84.9, the highest in the region, and where eight out of ten workers are not legally identified or work in a company without legal records.

The second economy with the highest percentage of informal workers in the region was Guatemala; There, about 79% of the active labor force does not have legal conditions such as benefits or social security, and works in some area within the informal sector.

Despite the figures presented by the agency, the Ministry of Labor and Social Welfare of Guatemala, headed by Rafael Rodríguez, said that the country had reduced its informality rate by 4.2 percentage points, and stood at 65.3% from 69.5%, registered in the period 2019-2020. The figure, however, remains far removed from the ILO data.

In third and fourth place were El Salvador and Paraguay, with records of 69.1% and 68.9%, respectively. In Peru, it was estimated that 68.4% of workers were employed in the informal sector at the end of 2020, while in Ecuador the rate was 63.5%.

Despite the fact that in Colombia, which was located in place seven on the list, the ILO registered a rate of employed in informality of 62.1%, the National Administrative Department of Statistics (Dane) revealed that this figure was only 47.7 % at the end of 2020, which meant a recovery of 1.5 percentage points compared to the end of 2019, in contrast to the ILO.

Meanwhile, Chile appeared at the bottom of the list, with a record of 25.3% and Uruguay with 23.9%. Finally, the Inter-American Development Bank (IDB) predicts that, in 2021, 7.5 million people will join the informal sector, and that in five years the figure will increase from 54% to 62% in the region.