Hartanya Bejibun, This is the Profile of the 10 Richest People in Indonesia 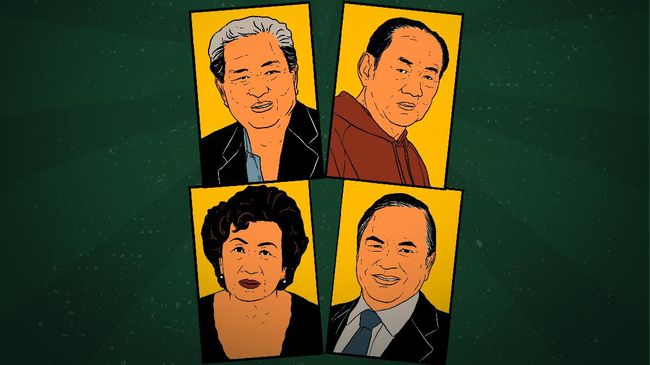 Jakarta, CNBC Indonesia – Forbes has again released a list of the richest people in the world through ‘The Richest in 2021’. A number of familiar names fill the list such as Amazon CEO Jeff Bezos who maintains his position as the number one richest person in the world.

The list also includes the names of tycoons from Indonesia who are already familiar. There are brothers who own the cigarette company Djarum and Bank Central Asia who still maintain their position as the number one and two rich people in the country.

Here are the details of the 10 richest people in Indonesia:

Budi’s coffers increased significantly from 2020, which was recorded at US $ 13.6 billion or Rp.204 trillion. The acquisition of his wealth is obtained through banking and cigarettes.

As is well known, Budi and his brother Michael Bambang Hartono are owners of the Djarum cigarette company and are also shareholders in PT Bank Central Asia Tbk (BBCA).

The Hartono brothers bought BCA shares from the Salim Group, in 1997-1998 when the Asian economic crisis occurred.

Michael Bambang Hartono became the richest person in second place following his younger brother Robert Budi Hartono in first position. While on the list of the world‘s crazy rich he is in position 89.

His total wealth in 2021 is recorded at US $ 19.7 billion or Rp.295.5 trillion. Like his younger brother, Michael’s coffers came from cigarettes and banking.

The 81-year-old man’s wealth also increased significantly from 2020, which was recorded at US $ 13 billion or Rp.195 trillion.

Michael Bambang Hartono is also known as a Bridge athlete who contributed a bronze medal at the 2018 Asian Games.