Guess crazy “ruins of ancient cities”! Surprised at the bottom of Dongting Lake, there is a greater crisis behind a vast network of mysterious patterns | Cross Strait | Sanli News Network SETN.COM 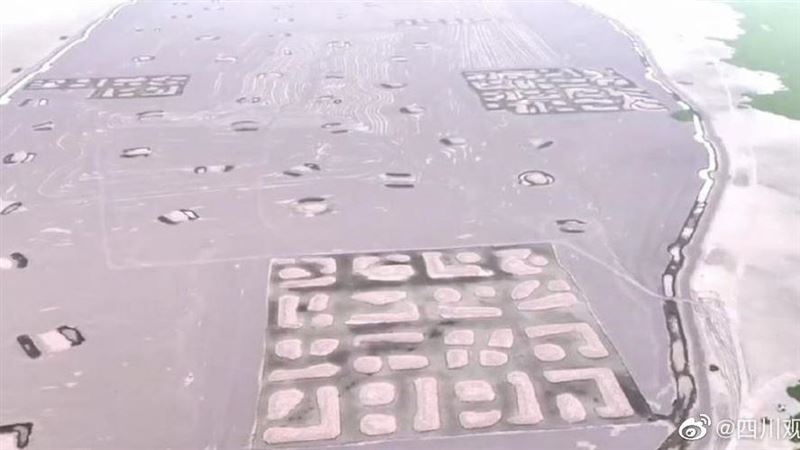 Continental Center / Recommended by You Shuting

▲The water level of Dongting Lake was lowered, and it was discovered that there are mysterious hidden patterns at the bottom of the lake. (Image / flip from Sichuan Observation Weibo)

“Dongting Lake”, one of China’s five largest freshwater lakes, was recently discovered to have “mysterious patterns” hidden in the lake bed due to the drop in water level. This immediately attracted a large number of people to hypothesize that it may be the ruins of an ancient tomb or an ancient city. However, in addition to discussing whether it is an ancient city site, most Chinese netizens have expressed concern about the drought.

According to “Jimu News” and “Sichuan Observation” reports, due to the drought, the water level of Dongting Lake continued to drop. When some netizens used aerial cameras around Dongting Lake to take pictures of the beautiful scenery of Dongting Lake, they suddenly discovered a “magic symbol” at the bottom of the lake. , It immediately sparked speculation on the Internet.

Some people think that the magic symbol such as the QRcode may be the ancient city ruins or ancient tombs. From the photos exposed on the Internet, we can see that there is a large square in the lake bed, and there are large blocks inside and little ones. , which at first glance looks like a labyrinth. “Jimu Report” interviewed the photographer, and the other side said that it was because a friend saw the magical pattern at the bottom of Dongting Lake that he thought of using an aerial camera to find out.

▲Because it hasn’t rained for too long, the river bed has dried up. (Image / flip from Sichuan Observation Weibo)

And what is the magical pattern at the bottom of the lake? An official official went to the site to verify and ruled out the possibility of “ancient city, ancient tomb”, believing that it was more likely that it was a “wall”. (According to the Mandarin Dictionary compiled by the Ministry of Education, the embankment is a kind of waterproof building, usually along the lake to surround the fields and build a building similar to an embankment.) Some Chinese netizens who saw the news said thought he should worry about the drought, “Laughing to death, what QR code, what mysterious code, what ancient tomb site, isn’t this what the bottom of the lake in the dry season really looks like?”, “The point is that Dongting Lake and Poyang Lake have bottomed out this year. The Yangtze River tributary has basically stopped flowing. From summer to now, it has become shallower and shallower, and it hasn’t rained in Hunan for a long time.”