Giannis Antetokounmpo, MVP of the All Star 2021 of the NBA 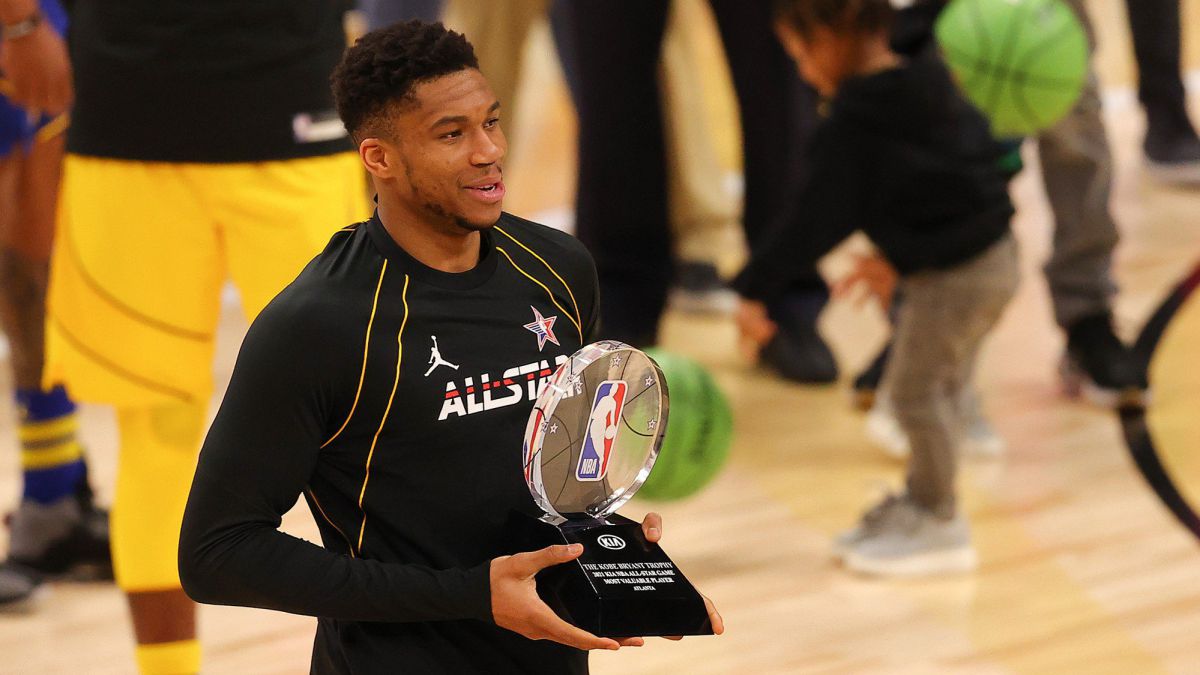 Giannis Antetokounmpo continues his climb towards the nomenclature of legend. The Greek, who does not stop conquering individual distinctions, he has clinched the All Star MVP after an absolutely monstrous performance. 35 points, 7 rebounds, 3 assists, and a spectacular shooting series: 16 of 16 in field goals with 3 of 3 in triples. And a +17 with him on the track. All this has given him the award that bears the name of Kobe Bryant as a tribute to the deceased star, one that he had not yet conquered and that continues to increase the string of individual distinctions, a list that does not stop growing and that already leaves him, at only 26 years old, as one of the best players of the present, and with a future in which no ceiling is in sight.

The Greek, who signed the highest renewal in history with the Bucks a few months ago (228.2 million in five seasons), won Most Improved Player award in 2017, MVP of the season in 2019, and he repeated that last award last year, when he also joined it with the award for Best Defender. That fact put him next to the greats, since only David Robinson, Hakeem Olajuwon, Kevin Garnett and Michael Jordan had collected the two awards. And only Jordan and Hakeem did it in the same season. A spectacular event that completes a curriculum that includes five All Star appearances, two nominations for the best quintet of the season and a video game statistics.

Giannis is missing the eternal absence of the ring. After threatening to leave the Bucks to seek the championship dream elsewhere, the star will remain linked to the only franchise he has been with since landing in the best league in the world, back in 2013. And his mission will continue to lead her to the ring in a playoffs that have always choked him, his coach Mike Budenholzer and his team. That will be the great mission this season for some Bucks who are trying new things in regular season, without obsessing over getting the best record and focusing on surrounding your star well and have alternatives beyond that single plan that has always limited them a lot when it comes to competing, in a tie, with tactically richer teams and with many weapons to curb the power of the Greek.

The Greek’s Achilles heel will be put to the test at the end of May, when the final phase begins. At the moment, Giannis continues to compete legitimately and again for the MVP and the Best Defender award, with averages of 29 points, 11.7 rebounds and almost 6 assists per night, to which he adds 1.3 steals, 1.4 blocks and 55.7% in field goals (with less than 30% in triples and problems in free throws, two of the things that he continues to try to improve). Of course, regardless of what happens then, Antetokounmpo is part of NBA history, and a living legend who has added one more award to his carousel, with a sublime performance, one of the best remembered in recent years at the All Star. A new MVP for Giannis Antetokounmpo, the award collector.