Furio Colombo: with Sartre in the jeep driven by Che Guevara 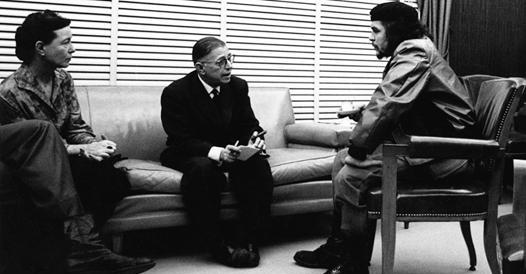 It is the morning of December 31, 1960, “the first anniversary of the young and cheerful revolution that had put the dictator Fulgencio Batista to flight”. Under the ladder of the plane are Jean-Paul Sartre, Simone de Beauvoir, Françoise Sagan and an Italian journalist: Furio Colombo, who arrived from New York with a pencil visa written in his passport by Raulito Castro, son of Raul, the brother of Fidel. A jeep comes fast, too fast, and stops in front of the group. He is behind the wheel: Che Guevara. “A beautiful, slightly worldly smile, a wispy beard, a face already drawn in our memory by the events, but whiter and upper class of combat images… ».

Here, Furio Colombo is one who toured Havana with Sartre on a jeep driven by Che Guevara. And now his stories become a book, The discovery of America, published by Aragno in the series of Journalism Classics directed by Alberto Sinigaglia, who signs the preface.

The first interview is with Eleanor Roosevelt (“A conservative administration encourages conformism and conformism is capable of growing immeasurably, it works more than laws and controls, it produces the riskiest of complaints when people get to the point of hearing the right and necessary silence”). It is 1961. The author is in America for Olivetti. He attended high school with Edoardo Sanguineti, university with Umberto Eco, joined Rai with Gianni Vattimo (and again Eco), was Giovanni Conso’s assistant in the chair of criminal law. From New York he began to write on Pannunzio’s «World». America is a hotbed of talents and characters; Columbus meets them and tells almost all of them. Allen Ginsberg: «Here, as in revolutions, every death is necessary because the project, seen from the small point of observation of each of us, is incomprehensible. But all the deaths, together, are a masterpiece ». James Baldwin: Born and raised in Harlem, he knows what the torment of an intelligent young black man can be, between the dullness of racists and the conformist coldness of others. But he knows that there is no salvation for negroes alone, that there is no liberation if not common ». Arthur Schlesinger: «You can clearly see two inverse lines of force, a little superficially one could say: two souls, competing for control of the great body of this country». A conservative soul, sometimes reactionary; and a progressive soul. «The soul of Jackson, of Jefferson, of Lincoln, of the two Roosevelts comes back continuously, from the height of the worst moments, and the country starts to go again. This was the Kennedy period. ‘

Furio Colombo receives letters from Joan Baez in prison, arrested for leading a demonstration against the war in Vietnam. Accompany the Beatles to India, to meditate on the Himalayas under the guidance of Maharishi Mahesh Yogi. “Steal” an interview with Woody Allen at a party. He surprises Philip Roth by pointing out that he took the name of the psychoanalyst of the Desire Professor, Klinger, from a Madison Avenue beauty salon. He meets Andy Warhol, Susan Sontag, Arthur Miller, Tom Wolfe, Norman Mailer, Leonard Bernstein, Mark Rothko. Muhammad Ali, in a television studio. And Frank Sinatra, in the Atlanta ghetto in revolt. But lucky encounters are not the center of the book. There are three tragedies.

Three crimes. Bob Kennedy, whose campaign for the Democratic primary he was telling could have brought him to the White House. Martin Luther King, whose heir he meets, Andrew Young (“Who shot?” “What does it matter. A Southern Negro has lived for centuries waiting to be killed”). And Pier Paolo Pasolini, whom he interviewed for the first issue of “Tuttolibri” (the cultural insert of the Press, long directed by Sinigaglia) on the eve of the assassination. A very close conversation, at times hard, to which Pasolini himself gave the title: “We are all in danger”.

There is a link between the most intense pages of the book and those that open it. Short autobiographical notes, in which Furio Colombo condenses the experience and the youthful memory of fascism, of the racial laws, of the war, of the first trains of the Reconstruction: “Only after the long journey between Milan and Turin with very long stops in the empty countryside or near in rubble, which lasted seven or eight hours, I realized that I had slept standing with my face against that arm and had never woken up. Before even moving, I saw Superga, on the hill, and I realized we were in Turin. And I saw very close, as if enlarged on a school notebook, the number on the arm that had supported me. So close, an elementary writing appeared to me, like a working note. And you could see that they couldn’t erase it, even if I didn’t know what a tattoo was at that time. ”
Because even a fantastic and full life does not save you from the experience of pain and horror.