From an Engine Master: What Should You Do When Your Car Fires and After? 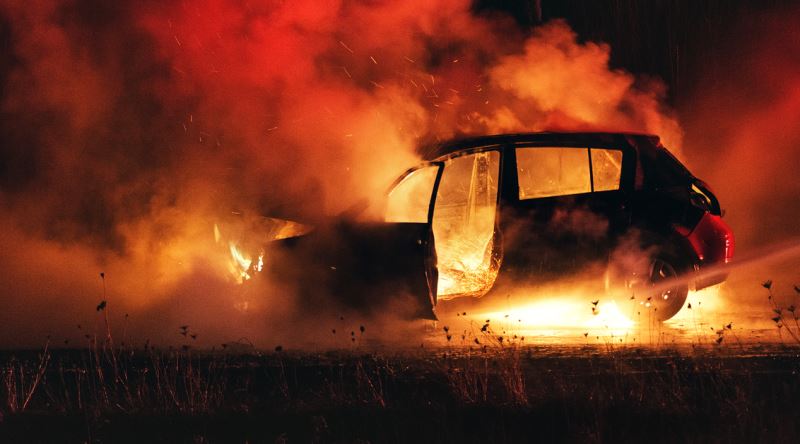 Let’s find out why a car burns today, what should be done during and after the fire, and what precautions should be taken to avoid such a situation.

First of all, don’t ask if a car will burn out, yes it will. In fact, you may find your car, which you parked and went to, in the middle of the night, with the neighbors awakening it to ashes. Even when you’ve been in and out of a store for five minutes, your vehicle may be on fire when you return.

We can list the causes of fire in cars as follows:

First of all, let’s deal with fires caused by malfunctions that may occur in the fuel system.

It is one of the most important causes of fires in automobiles.

As you know, three types of fuel are used in automobiles; gasoline, diesel and lpg. While gasoline cars seem to be the primary cause of fires, a diesel car can also catch fire due to a fuel system failure. The only thing that causes the fuel system to cause a fire is a leak. Hoses and connection points need to be checked regularly to avoid leaks. If you smell an unusual fuel while driving, pull your vehicle to a safe place, stop immediately and open the hood and check. If there is a problem, it will be evident visually and visually. Do not start your vehicle after this point.

– you have a car without a sequential system and you are constantly using lpg. One day, you were told to “get a little polish on that engine” and you bought gas and after a while, flames and smoke started to come out of the engine. Result: the car burned. Reason: Gasoline hoses that have not been used for a long time dried and cracked. The gasoline coming out of the crack was attached to the exhaust manifold, the tops of the spark plugs. The alternator has reached the inside of the alternator and the result is undesirable. I recommend replacing the hoses every year to avoid it.

– Gas leakage from the LPG system will be the same, but it is not as dangerous as gasoline. A LPG car usually catches fire during the first start and usually happens at petrol stations. It is easy to intervene as it ignites and goes out at once. Current LPG systems measure the ratio of the gas coming out of the tank and the gas entering the cylinders, if there is a shortage, they cut the gas flow over the tank and a fire is prevented. But that doesn’t make him innocent.

– Although diesel fuel does not ignite as easily as gasoline, in the event of a leak, if it comes into contact with very hot parts of the engine, it can suddenly ignite.

2. Malfunctions in the electrical system are one of the most insidious fire hazards.

It can cause a fire even when you are not in your vehicle, and stopping your vehicle as soon as you realize the danger may not work sometimes. The starting point may be from different places, since the grounding cable is not burned from one point, but as a complete installation.

– fuse boxes top the list in this regard. Continuous use of high-current equipment can sometimes overheat the fuse and the lousy fuse does not blow. The plastic on the overheated fuse catches fire and burns like a lighter and ignites whatever is on it. To avoid such a situation, open the fuse box from time to time and check if there is a fuse that melts. some drivers can just wind a wire over it instead of replacing the fuse in an emergency and it stays that way. When buying a used car, open and check the fuse box. If the fuse has already blown, there is a problem and the job is made even more dangerous by winding the wire.

– The starter is one of the equipment that causes fire at night. A positive current is constantly coming from the battery on the dynamo and if this cable becomes loose and comes out for some reason, it will contact right and left and cause a fire. This fault occurs most often while driving. regularly check the wires going into the starter. If your vehicle has been having starting problems lately, I would say have this cable checked.

In this image, if the b point loosens and touches something, the vehicle’s battery will explode.

– Doing something inside the car by pulling cables from right to left for equipment such as alarm, sound systems, LED light, backup camera, etc., may cause a fire. For example, you can’t buy a seat heating pad and pull a cable over the cigarette lighter. In cars, the two wires are not originally joined by electrical tape. Everything is furnished and presented to you according to the book. The electrical tape you use to isolate a cable you cut may open over time and contact with unwanted points may cause a fire.

– Causes such as the starter motor being stuck on the flywheel, the bearings locking up and burning the belt also cause a fire. A standard user might understand such problems, but there are many drivers who just don’t understand and just keep going.

We can list the fires caused by the third driver as follows:

– dropping cigarettes into the vehicle. The cigarette butt he thought he had thrown out the window went in and started a fire in the backseat.

– Forgetting a lighter in the car on a summer day. The lighter may explode and cause a fire.

– Leaving glass bottles, plastic bottles, glasses and glasses that have a lens effect in the vehicle in the summer heat, in a place that is exposed to the sun. At a moment when the sun is coming from the top with pain, you may cause your vehicle to catch fire while parked.

– Leaving an electronic device with a battery, such as a mobile phone, tablet, camera, in a sun-exposed place in the vehicle, may cause the battery to explode from heat and cause a fire.

4. Environmental causes are fires that are not usually caused by you or your vehicle.

factors such as natural disasters, arson, fault of others. If lightning strikes your vehicle while it is parked, it may start a fire. The cigarette butt thrown from the balcony by someone else, can fly through the window and cause a fire. Someone who has enmity with you may come at night and set fire to your vehicle.

If you smell an unusual fuel smell, burnt cable or burnt fabric-like odor in your car, and if you witness the indicators blinking or dimming out of nowhere, pull over and stop your vehicle immediately. Take your precautions and make the necessary checks without thinking that the smell is coming from outside. If you see smoke rising from the engine compartment, do not open the hood, no matter how light, and open the fire extinguisher slightly and squeeze in the engine hood. If you open the hood suddenly, you may experience an explosion of flame.

If there is no smoke or flame, but the smell is definitely coming from your vehicle, remove the negative side of the battery immediately and leave it that way. call a service center and ask for help. If there is heavy black smoke coming from the engine with occasional flames visible, open the doors immediately and leave the vehicle. For example, after a fuel system failure, it takes about two minutes for the flame to completely engulf the car. If there is a wind from the front, this takes less time. In such a case, save your life first and call the fire department immediately and ask for help. Take security and when it’s all over, have a close cigarette and sit and watch.