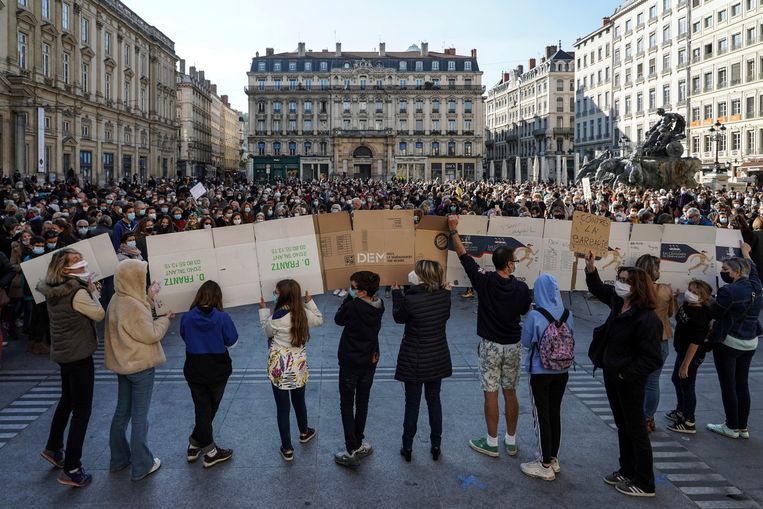 In France, the shock of the brutal murder of a secondary school teacher in Conflans Saint-Honorine, a quiet suburb northwest of Paris, is still rife. The teacher was killed for showing a cartoon of the Prophet Muhammad in class in a lesson on freedom of speech. On a Twitter account of the Chechen perpetrator, who was shot by police on Friday immediately after his horrific act, images were found of the head of the teacher with the text “ I executed one of the hellhounds who dared to kill Mohammed. to crack ‘.

It was announced on Sunday that eleven suspects have now been arrested. At least four of them are related to the murderer who was shot. Terrorism prosecutor Jean-Francois Ricard has said he is opening a major investigation into the alleged terror network surrounding the Chechen who received refugee status in France in March. For example, his half-sister is said to have left for Syria in 2014 to join the Islamic State.

The detainees also include the parents of another student of the teacher. The school management had recently received complaints from students and their parents about the cartoon of the Prophet Muhammad with which the teacher started a discussion in class about freedom of the press and speech ten days ago. Depictions of Muhammad are a form of blasphemy according to Islam.

A video has been posted on Twitter since early October in which a father of a 13-year-old student at the school complains about a ‘villain’ who is teaching his daughter, the conscious history teacher. The man says that the teacher first asked which students were Muslim. Children who raised their hands were given the opportunity to leave the class for a while because he was going to show something that could be painful for them. The father’s daughter on Twitter refused to leave and was shocked by the cartoon, where Mohammed is naked with the buttocks up.

The father found the state of affairs so offensive to Muslims that in the video he calls on other parents to report to him, because he thinks that this “criminal” teacher should no longer be in front of the class. Earlier, he turned against the teacher on social media for “bragging” in class that he participated in the commemoration of the attack on the satirical magazine Charlie Hebdo, where five years ago terrorists opened fire on the editorial office in retaliation. for publishing a cartoon of Mohammed. “You have his name and his address to say STOP,” the father said on Facebook. It is unclear whether the father and the perpetrator have anything to do with each other.

According to shocked parents of students, who spoke to French media at the school on Friday evening, the teacher did not discriminate, but wanted to prevent Muslim children in his class from being hurt by the cartoon. According to the French newspaper Le Figaro, the teacher received such serious threats from parents that he reported it to the police.

When police found the decapitated victim after calls from witnesses on Friday afternoon, a man dressed in black was two hundred meters away from the body. He was carrying a knife, pneumatic pistol and possibly a belt with explosives. After an escape attempt, he refused to surrender and threatened the police. Then the officers ‘neutralized’ him with a dozen bullets.

Shortly after the beheading, the alleged perpetrator allegedly claimed the attack on Twitter. There, user @ Tchetchene_270’s account was suspended after posting a picture of a bloody cut-off head. The user claims to have acted in the name of ‘Muhammad the Merciful’, after which he addresses the French president. “To Marcon (sic.), Leader of the infidels, I executed one of your hellhounds.”

France has been regularly shaken by major attacks by Islamic militants in recent years. The murder of the history teacher is the second violent incident since the start of the trial against those involved in the January 2015 attack on Charlie Hebdo. Last month, an immigrant of Pakistani origin attacked two people with machetes near the magazine’s former editorial office.