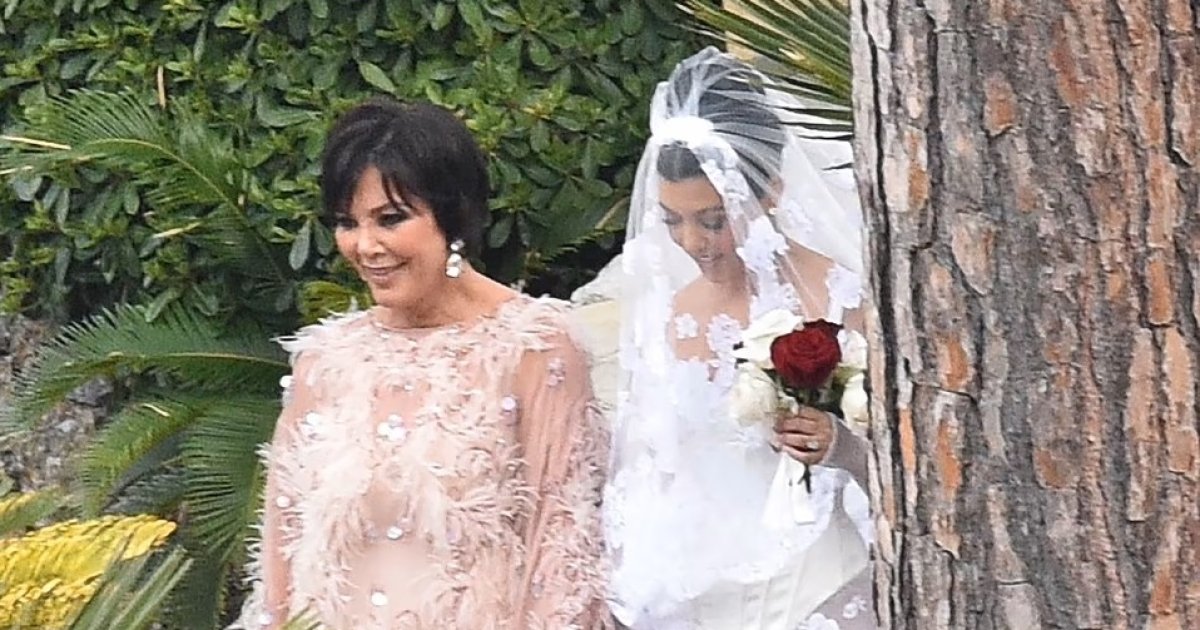 The bride was in white, but her younger sister Kim chose a lace outfit in the style of Morticia Addams from The Addams Family.

Earlier, the first pictures from the Italian Portofino appeared on the Web, where Kourtney Kardashian, the eldest of the sisters, married her chosen one Travis Barker for the third time. However, it turned out that the black mini dress and short veil was only one of the outfits. The main dress was still white, but also short. Daily Mail published the first pictures and details of the celebration.

46-year-old Travis appeared at the ceremony not in the cassock in which he was seen earlier, but in an elegant suit with a bow tie. The wedding was also attended by his two adult children from a previous relationship: son Landon and daughter Alabama.

The ceremony itself took place in the grotto, as predicted by the tabloids, Courtney walked to the altar under “Ave Maria”. Her mother, Kris Jenner, helped her down into the grotto, wearing a pale pink dress adorned with feathers for the occasion.

By the way, the ceremony was sponsored by the Dolce & Gabbana fashion house, which not only provided wedding dresses, but also Riva boats, on which guests arrived at Portofino, where the ceremony took place.

Courtney’s dress was made of lace and complemented by a corset, and the Virgin Mary was embroidered on a long veil. In her hands she carried a small bouquet of red and white roses.

After the wedding, the couple and the guests posed for photographers, so official pictures should be expected later.

Camera flashes were later seen indicating the couple were posing for official photos with their family and friends. It is known that the entire territory of the Villa Castello Brown, where the wedding party took place, was closed to the public and securely hidden from prying eyes, and all the staff signed a legal agreement forbidding them to talk about the wedding.

Sisters Khloe and Kim Kardashian wore black at their wedding. Moreover, Kim’s outfit on the Web has already been compared with the dress of Morticia Addams from the famous movie.

The exact number of guests is unknown, but the wedding was attended by Machine Gun Kelly, a longtime friend of the groom, with whom they recorded the rock album Tickets to My Downfall last year. Megan Fox accompanied him, but she managed to elude the paparazzi.

Recall that the third wedding ceremony of Courtney and Travis took place in Portofino. The first took place in Las Vegas, but was invalid due to the lack of a number of documents. They were married in Santa Barbara in May a second time.