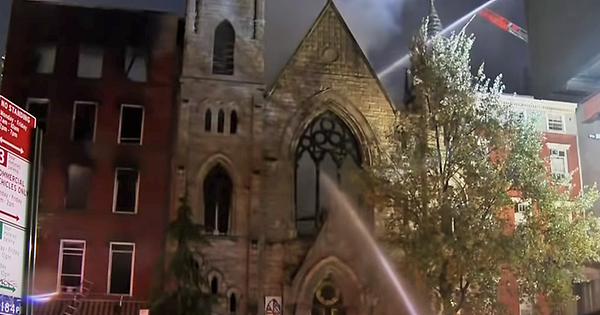 The Middle Collegiate Church is one of the most famous churches in New York. A fire turned the church into a ruin.

The Middle Collegiate Church is one of the most famous churches in New York, the roots of its congregation stretching back to the early 17th century. A fire turned the church into a ruin.

According to the New York Fire Department, the fire broke out around five o’clock on the first floor of an empty building in the neighborhood and then spread to the church.

360 videos are not supported here. Switch to the Youtube app to watch the video.

“We are deeply dismayed that our beloved shrine has burned to the ground,” Rev. Jacqui Lewis wrote on the Church website. “We know that God does not cause such tragedies, but that he is now with us in our mourning.” What will become of the ruin is unclear. According to Lewis, the Protestant community has been celebrating its services online since March because of the coronavirus epidemic.

History goes back to the 17th century

“Unfortunately it looks very bad”, said Rev. Amanda Ashcraft on ABC. “The altar is badly damaged, our painted Tiffany windows are lost.” Almost 200 firefighters were on duty. It took them more than three hours to get the flames under control. Four helpers suffered minor injuries. The cause of the fire was initially unknown.

The Middle Collegiate Church has around 1,300 members. The roots of the community go back to the early 17th century. It is one of the oldest in America. In its tower hangs the New York Liberty Bell, which, according to the Church, rang on the birth of the nation in 1776. In addition, the bell rang for the inauguration and death of every US president. It is currently unclear whether she survived the fire.

the price of motherboards on Intel Z590 will reach 1500 euros

in Paris, the battle of the three candidates during the first televised debate

Coronavirus: The dangerous hunt for the vaccine

20 minutes – Corona hotspot in Graubünden for party goers from Belgrade

Many wasps and maggots due to high temperatures, also more nuisance