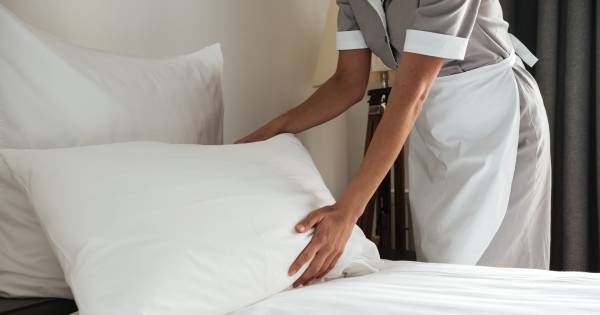 Hotel rooms in our country are not cleaned properly, despite stricter corona protocols. It appears that cleaners do not clean beds and toilets and leave used towels in the room.

That appears from a sample among six well-known hotels that was operated by Cash desk that collaborated with travel journalist Daan Vermeer for this. The journalists booked rooms in branches of Bastion (Utrecht), Best Western (Amsterdam), Fletcher (Amersfoort), Ibis (Haarlem), NH Hotel (Utrecht) and Van der Valk (De Bilt).

In their sample, the journalists used a UV marker with which they left markings on twenty objects in the rooms. When, shortly after their overnight stay, they made a new reservation for the same room under a different name, it turned out to be not properly cleaned in almost all cases.

At the Bastion hotel, the pillowcases, duvets and sheets of both beds were found not to have been replaced. At the visited hotels of Fletcher, Ibis and NH Hotel, only one of the two beds was changed. Only one hotel had the toilet completely cleaned.

In five of the six rooms, much of the markings left behind on the light switches, desks and bedside tables were found. Several towels also turned out not to have been replaced. At the Bastion hotel it turned out that the plastic disposable cup that had been used for drinking was still there.

The hotels have to Cash desk to take the findings seriously and to review their cleaning protocols and controls. According to the CNV union, hotel cleaners have to do their job under too great time pressure.

An American study: Taking “aspirin” daily reduces the risk of death with the Corona virus