Facts of the Husband and Wife of Suicide Bombing in Makassar, Married 6 Months Ago to JAD Page all

KOMPAS.com – The police managed to uncover the suspect suicide bomber in the cathedral church Makassar, South Sulawesi on Sunday (28/3/2021.

The perpetrator was a married couple L (26) and YSF.

According to the Head of the Public Relations Division of the National Police, Inspector General Argo Yuwono, the husband and wife married about 6 months ago.

Also read: Story of Suicide Bombing Survivors at the Makassar Cathedral Church, Motorcycles Until Oleng Due to Explosion

They are both known to live on Jalan Tinumbu I Lorong 132, Bunga Ejaya Village, Bontoala District, Makassar.

The wife, YSF is known as a private worker. Some even said that YSF was 4 months pregnant.

The two of them rode on a motorbike and tried to get into the church area. The bomb they were carrying exploded at the end of the church gate when it was stopped by church security.

Quoted from Eastern Tribune, The husband and wife ride a motorcycle with the number DD 5984 MD.

From the results of the checking, the owner of the motorbike was Hasnawati whose address was in Pampang, Panakukang District, Makassar.

Also read: The woman who carried out the suicide bombing in Makassar is called 4 months pregnant, the police said

Head of the National Counterterrorism Agency (BNPT) Komjen Boy Rafli Amar said the perpetrator L and his wife were included in the millennial circle.

According to him, they both made bombs through training on social media.

“They developed a procedure for making explosives in a manner online training on social media, “he explained.

Before carrying out the action, L had left a will with his parents. In the letter, L said goodbye and admitted that he was ready to be martyred.

Also read: The body of the husband and wife of the suicide bomber at the Makassar Cathedral Church is buried in Maros 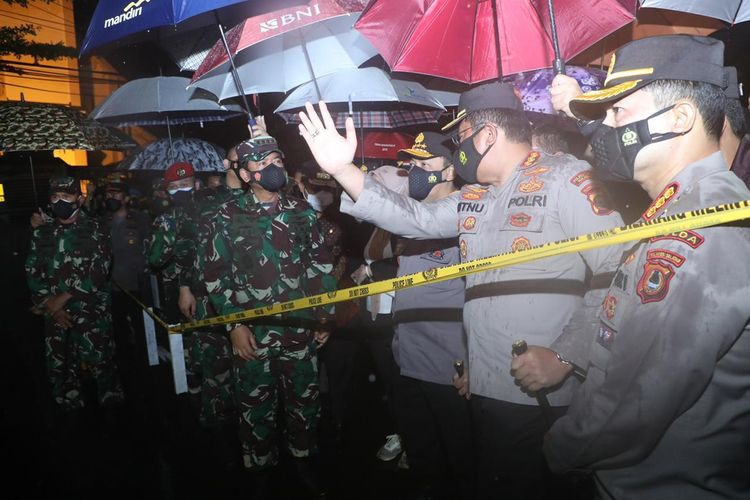 The two of them were said to have often participated in recitation of the doctrine of jihad at the Villa Mutiara Cluster Biru housing estate, Biringkanaya District, Makassar.

“They are in the Villa Mutiara recitation group, where each has a role to provide doctrine and prepare plans for jihad,” said Listyo Sigit during a press conference at the South Sulawesi Police Headquarters, Monday (29/3/2021).

Also read: Revealed, these are 4 facts behind the figure of the suicide bomber at the Makassar Cathedral Church

In addition, Lstyo said that L and YSF played a role in buying materials to be used for suicide bombing devices.

Not only the two married couples, the role of planning the suicide bombings and preparing the explosives, said Listyo, also involved 4 residents of Bima, West Nusa Tenggara.

The four people were secured after the explosion suicide bombing in Makassar.

“Until today, we have secured 4 people with the initials AS, SAS, MR, and Aa. Each of them plays a role together with L and YSF,” said Listyo. The plan is that the bodies of the husband and wife of the suspected suicide bombers will be buried in Maros Regency, South Sulawesi.

To be precise, in the village of L’s father, the perpetrator was a male. This was conveyed by the Head of the RT where they live, Nuraini.

He said that after being put in the coffin, the bodies of the two of them were not taken to the boarding house or the house of L’s parents in Bunga Ejaya Village, Bontoala District.

“It is in Maros now because it was immediately buried there, not brought here (the perpetrator’s house),” said Nuraini when contacted by telephone, Monday (29/3/2021) night.

“Out of here the storms again I will better go straight to Maros. “Delivered by the supervisor, he said,” added Nuraini.

Also read: This is the will of the suicide bomber at the Makassar Cathedral

Photos of the alleged perpetrator are circulating 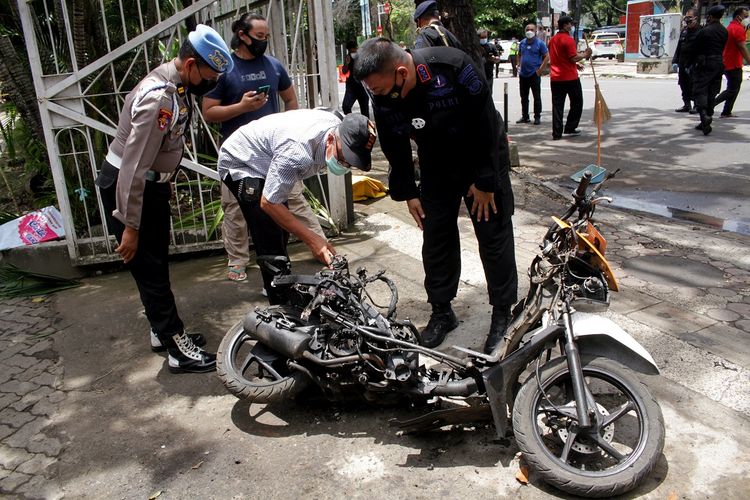 BETWEEN PHOTOS / ARNAS PADDA Police officers observe the motorbike used by the suspected suicide bomber before being evacuated in front of the Makassar Cathedral Church, South Sulawesi, Monday (29/3/2021). Police have identified one of the two suspected perpetrators of the suicide bombing that occurred on Sunday (28/3/2021) in front of the Makassa Cathedral, who is a male with the initials L, while the other is still in the process of being identified. BETWEEN PHOTOS / Arnas Padda / yu / aww.

Meanwhile, a photo of the alleged suicide bomber is circulating.

In the photo, a man wearing a brown jacket and turban is seen driving a motorbike and hitching a ride on a woman.

However, he said that currently his party was still conducting deepening.

Also read: Facts about the Arrest of Terrorists in Bekasi and Condet, 5 Active Bombs Seized and Related to the Bomb in Makassar

Zulpan said the suspected perpetrator had previously broken into the church but was prevented by the security forces.

“So that it does not get inside because it is prevented from entering,” he added. 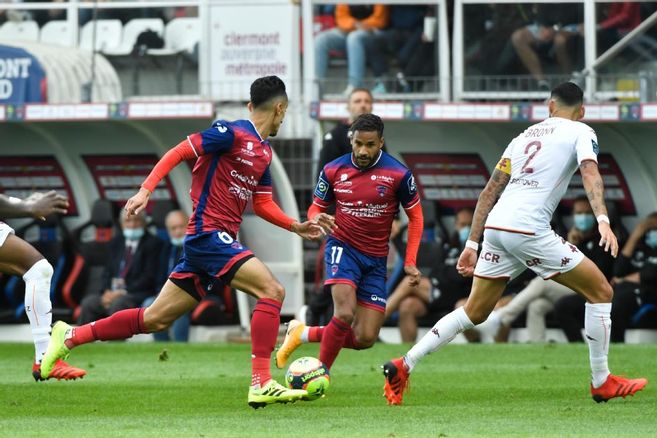 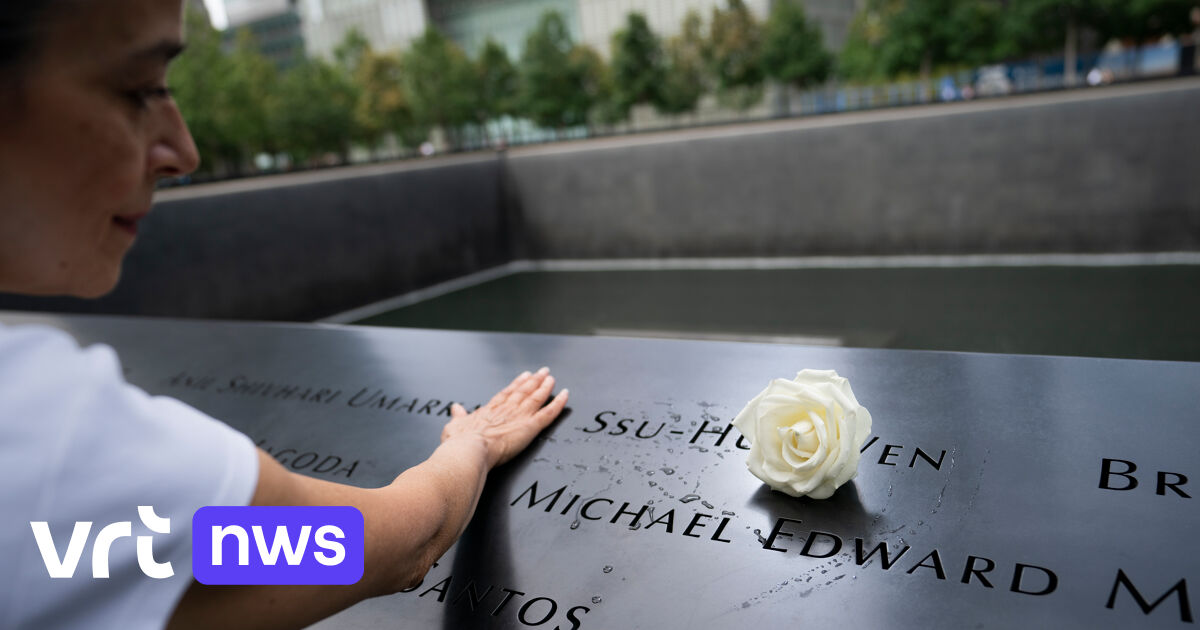