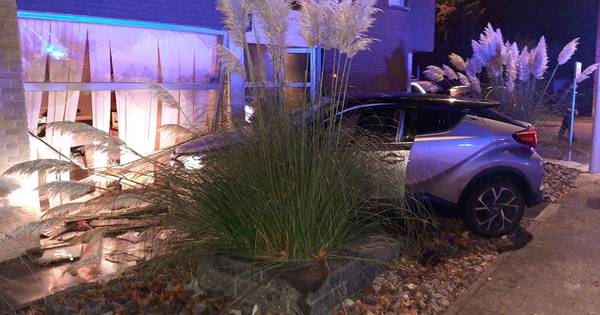 DenderleeuwLast night, a driver from Denderleeuw drove his Toyota into a house in Noordstraat in Denderleeuw after he left the corner at high speed and hit another vehicle. The driver was also under the influence of alcohol. The car started to skid and drove through the window into Jurgen and Nathalie. “A few meters further to the right and the damage would have been a lot bigger,” says Jurgen.

The accident happened in the night from Saturday to Sunday around 00.45 am. Just before the crash in the house, the police already noticed the vehicle at the Kemelbrug in Denderleeuw. “A patrol saw how the car almost collided with their vehicle at high speed,” says Jurgen. The police immediately turned around and saw the man just driving into Rodestraat. They give chase to confront him with the facts, but a little further on things went completely wrong for the driver.

(Read more under the photos)

He entered the bend at Rodestraat and Noordstraat at high speed. There he ran into a woman who came from Noordstraat. He hit the vehicle in the side and then lost control and entered the house. “He first destroyed our bluestone letterbox and our flower boxes, after which he drove into our house with his nose through the glass,” says the couple.

The parents were sleeping upstairs with their children when they heard the enormous bang. “I immediately told them that they had entered our house,” says Nathalie Van Den Bergh. “We came down and immediately saw the debris and that our furniture had been pushed forward.”

The driver of the car looked dazed and a little later apologized in French to the owners during the interrogation in the police vehicle. The couple is very impressed with the facts, just like the children. “They went to sleep with our parents to avoid confronting them with these problems,” they say. “Jurgen says.

“Fortunately, the driver’s speed must have been slowed down to a large extent by the impact on the letterbox and the planters,” said the couple. “Otherwise, the damage might have been much greater and it was really in our living room. Fortunately our furniture has not been damaged and is still intact. ”

The driver took a positive breath test and his driver’s license was immediately revoked. According to the couple, that he drove too fast is not in dispute. “It is very difficult to cause such an accident at this place, unless you really go into the corner at high speed”, it sounds. Despite the havoc, the couple is relieved that there were no injuries. Fortunately, the woman who was hit first has nothing either. The damage will be repaired, but this can take a while. Just as the days are getting colder, we are dealing with this damage “, it sounds.

The fire brigade came to close the house after the accident, the owner may still install insulation himself to keep the heat in.

It became known why the coronavirus most often affects the elderly

90 minutes for Seba, but his brother Salvatore scores

Disney + comes with a sequel to the movie Willow | NOW