Doctor of the fish incident: I entered the endoscope and met her moving inside the patient .. Video and photos 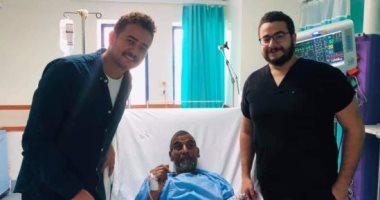 Dr. Michael Ibrahim, deputy plastic surgeon at Beni Suef Specialized Hospital, said that he was surprised by the entry of an unconscious patient, accompanied by an ambulance, to the reception department of the specialized hospital. Dr. Michael Ibrahim added, on the seventh day, “We installed a laryngeal tube at the same time as the reception nurse prepared everything and installed intravenous devices. It entered the laryngoscope and caught the fish moving in the patient’s mouth.”

The doctor added that in less than 20 seconds, he succeeded in extracting the fish, after which the patient began to breathe, indicating that the patient was kept in the hospital’s intensive care unit until his safety was fully confirmed.

Yesterday, Saturday, a surgeon in the reception department of Beni Suef Specialist Hospital succeeded in extracting a live fish from the entrance to the trachea of ​​a fisherman.

And one of the doctors was surprised while he was in the reception department of the specialized hospital when a paramedic in the Beni Suef ambulance facility transported a patient, called Dahesh Fayed, and a resident of Porsche Snour, east of the Nile, was suffering from shortness of breath and the inability to speak.


Extracting a fish from the mouth of the fisherman

Doctors with the hunter

The moment of extraction of the fish