difficult situation, Draghi can solve it. But the leader does not see any repercussions on his run to Siena- Corriere.it 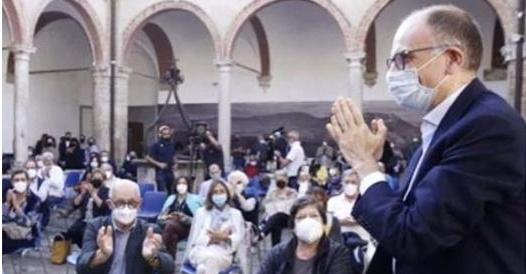 The secretary of the Democratic Party: “We will work to protect the work and the brand”

“The situation is difficult,” confides Enrico Letta to his collaborators and parliamentarians closest to him. The secretary of the Democratic Party refers to story of the Monte dei Paschi, but also to the political battle in the college of Siena in which he decided to run for the supplementary that will take place this fall in conjunction with the local elections.The right has already started to attack: the League is moving on the territory and on a national level Maurizio Gasparri, launches in rest, has moved to denounce “The conflicts of interest of the Democratic Party”.

But beyond the emphasis and the dramatization, even a little deliberate, no one in the house of dem (and not only there) believes that the “Mps case” can really affect Letta’s electoral campaign, making him lose the college of Siena. So much so that someone in the pd house insinuates that the alarm was raised and amplified by the Nazarene himself.

It doesn’t mean that the situation of Monte dei Paschi and its possible evolution does not worry the dem. «That of MPS – explains the leader of the Democratic Party – is a very complex situation that must be faced by institutions and parties with seriousness and not with empty proclamations. The Democratic Party – and I personally, who are the secretary of the Democratic Party and who I am applying to represent this territory in Parliament with the utmost commitment – we will work with the government on three major priorities: job protection, brand protection and group unity ».

At this point the Nazarene therefore asks a Daniele Franco to explain the matter in Parliament. Letta puts forward the two presidents of the dem groups. And indeed in the late afternoon Debora Serracchiani e Simona Malpezzi they officially urge the Minister of Economy: «We hope that Franco will come and report to the competent committees of the Chamber and Senate. It is imperative that Parliament be involved».

The “no to dismemberment” of the bank already pronounced the day before yesterday by Letta is repeated by all the leaders of the dem. The president of the Tuscany Region Eugenio Giani does it in his own way, in no uncertain terms: “It is unacceptable that Mps is swallowed up by UniCredit“. The ultimate goal of the pd action sponsored by the secretary is also that of obtain that the direct presence of the state in Mps continue throughout the bank organization phase to accompany the whole process.

But the case of Monte dei Paschi di Siena certainly does not represent a bolt from the blue for the Democratic Party and its leader. Already in June, when for the first time the hypothesis of a candidacy of Letta in the parliamentary college left vacant by Pier Carlo Padoan after he became president of the Unicredit board of directors, the problem was very present to all the dem. So much so that many thought that the secretary was hesitant precisely because he knew that the “case” would explode in months, while, on the other hand, the leaders of the Sienese Democratic Party were pushing to bring Letta onto the field in the hope that, by nominating the party secretary in Siena, Monte dei Paschi was protected. After all, it is a well-known story, the one that united the fate of the MPS and the Italian left (Pci first, then Pd).

Therefore there is “no embarrassment” of Letta about his candidacy for the supplementary because he knew very well that it would “be linked” to the MPS question and that the solution of the affair could not be postponed until after the elections, as it was expected that however, the ECB stress tests were released on July 31st. Stress tests that Letta knew would have highlighted the impossibility of “going on like this”.

“I was aware of it from the beginning”, the secretary of the Democratic Party calmly explains and adds: “I go forward confidently.” Letta, moreover, believes that it is in the interest of the whole government to guide the process towards a “non-punitive solution towards the territory”. A “solution”, repeats the leader of the dem, which “safeguards the occupation and avoids the stew.” Comunquand the secretary of the Democratic Party has “full confidence” in this matter in the Prime Minister Mario Draghi: “If there is someone who has the competence and authority to lead a similar path, it is he”, emphasizes Letta forcefully.