Cyclone Medicane, nightmare on the Mediterranean. Greece in the crosshairs, Sicily and Calabria at risk 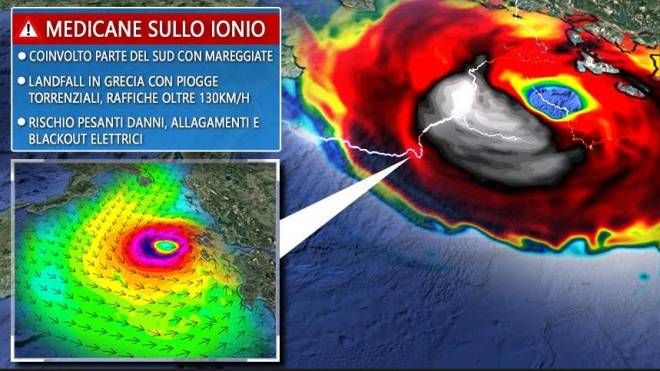 Rome, 17 September 2020 – Hurricanes don’t just plague the States: an intense Mediterranean cyclone, in transit on the Ionian Sea, will swoop down on the southernmost regions today, especially above Eastern Sicily and Calabria, with thunderstorms and strong winds. Actually this weather phenomenon – in technical jargon Medicane – is headed for Greece, but also laps the Italian coasts.
The alarm comes today from Civil protection, which issued a further warning of adverse weather conditions which follows and extends the one issued in recent days. The hurricane Medicane, impacting on the various areas of the country, they could determine hydrogeological and hydraulic criticalities.

The Medicane from the satellite

I meteorology at 3bmeteo they sound the alarm talking about Medicane (Mediterranean Hurricane), or the Mediterranean hurricane. “A Mediterranean cyclone was formed in the middle of the Ionian Sea with characteristics very similar to those of a tropical system – they write on the site – such as to make it a so-called ‘Medicane’. rare phenomenon on the Mediterranean, but not unique. The pressure inside its eye is less than 1000hPa and the winds that revolve around it reach 120km / h, with even higher gusts, raising waves even more than 8 meters high. The system is moving east-northeast and is not intended for our coasts, although it will indirectly involve them, but for the Greek ones “.

Medicane in Sicily and Calabria

The latest update of 3bmeteo ‘brings medicine closer’ to our coasts: “The Mediterranean cyclone in the last few hours has shifted its center of gravity towards the Ionian Sea and laps Italy, in particular Sicily and Calabria where rains and storms are in progress”, they slip this morning.
The Medicane is expected on Greece, where it will land tomorrow, Friday 18 September. with very intense winds and gusts above 160 km / h and torrential rains. But it is already doing damage to us too: from its center spread out extended clouds that arch and reach all of Southern Italy, but more incisive rains and thunderstorms affect the Ionian Calabria, with peaks of over 140-150 mm from midnight alone in the lower Crotone area, particularly in the locality of Isola di Capo Rizzuto. Some rain pushes north to Basilicata, Puglia and Cilento.
Instead, i twenty and it can be felt even on our Ionian coasts, those most directly involved, with gusts up to 60km / h on the coasts of the Catanese, slightly lower on the Ionian coast of lower Calabria, with the wave motion that begins to increase dramatically. On Calabria and Ionian Sicily, up to 2-3 meters of long wave are recorded in the most exposed sections.

How a Mediterranean cyclone is formed

But how do these Mediterranean cyclones (fortunately rather rare) form? The experts of IlMeteo.it explain this: “For physical characteristics and strength, the Medicane have nothing to envy to the classic tropical cyclones or hurricanes that lash the tropical sector of the Atlantic, the Pacific and the Indian Ocean. The ‘fault’ of the formation of this vortex is to be attributed in large part to the still very high temperatures of the seas (the latest data shows values ​​of about 26-27 ° C on the sectors where the vortex passes) which continuously feed this cyclone supplying it with new energy up to make it become a Medicane, a tropical-like cyclone “.

Meteorologists continue: “The essential characteristic is the warm core (warm core in technical terms), very present especially in the lower layers, with temperatures over + 2 ° C + 3 ° C (if not even more) than the environment These cyclones are able to conserve a great deal of power during their journey which often results in intense convective activity in the center, where particularly violent storm systems can be hidden, and very strong and turbulent winds with gusts of over 120 km / h, often in the form of a storm “.

Just two minutes of exercise made people smarter for the next two hours – Ferra.ru