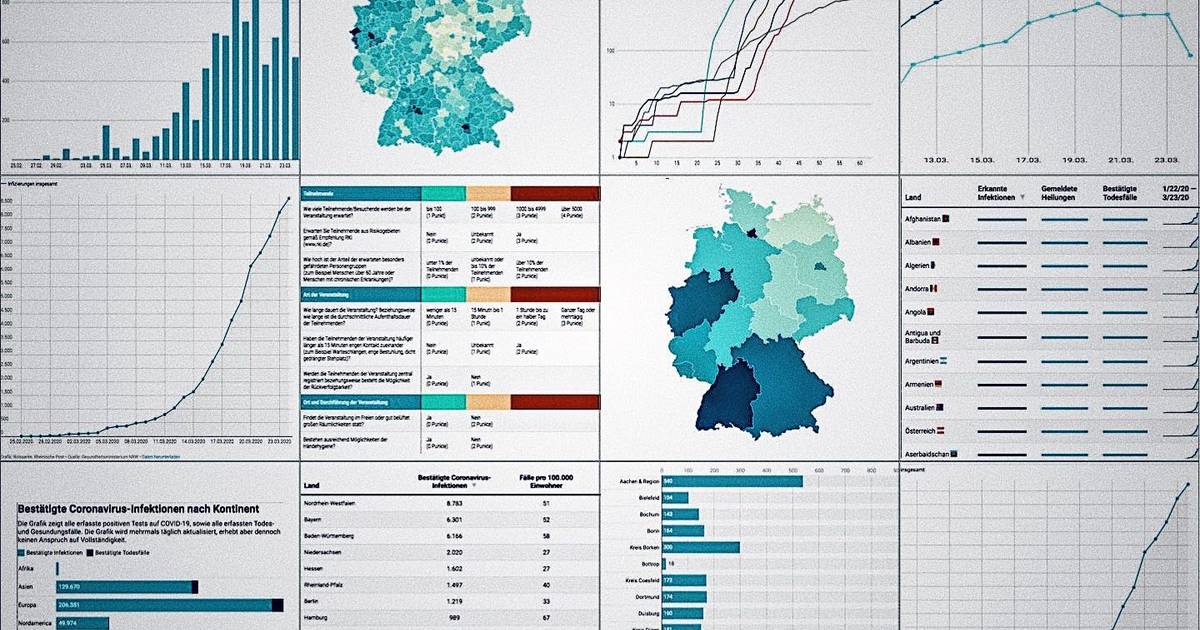 Interactive Düsseldorf The corona pandemic has been occupying the country since March 2020. Most recently, the authorities recorded 5,378 new infections in Germany. Here you will find all the latest figures from the Robert Koch Institute on illnesses, deaths and recoveries.

According to the Robert Koch Institute (RKI), the health authorities in Germany have counted 5,378 new infections in the last 24 hours. That is 35,709 fewer cases than were reported last Monday, when the RKI recorded 41,087 new infections. At the same time, a new death was reported, and the RKI recorded 69,433 other Covid patients as having recovered.

In the past seven days, a total of 275,937 new cases have been reported to the RKI in Germany. 331.8 new infections per 100,000 inhabitants were known in the last week. Even lower numbers were recorded in the previous week, when the RKI reported 243,938 new infections within seven days, which corresponds to an incidence of 293.4. The medium-term trend in Germany is therefore negative, the number of corona cases is increasing again.

The current data was published by the RKI on Monday morning – as of June 13, 2022 at 03:01. Later adjustments or additions to the RKI are possible. The daily updated figures are subject to strong fluctuations. For example, because fewer tests are carried out at the weekend or there may be delays in the reporting chain.

Since the outbreak of the epidemic, a total of around 26.81 million people in Germany have been shown to have been infected with the corona virus. To date, the authorities have recorded 139,807 deaths in connection with Covid 19 disease. However, the Robert Koch Institute also estimates that around 25.94 million corona patients have recovered.

According to the current status, an estimated 729,555 people are still actively infected with Covid-19, a decrease of 64,056 active cases compared to the previous day. The number is made up of the estimated number of recoveries and the confirmed number of deaths and cases.

Data: Tests and vaccinations in Germany

Since the end of December 2020, vaccinations have been used to fight the corona virus in Germany.

At the same time, tests for the virus continue to be carried out in Germany. The number of weekly tests in the laboratories was 496.48 thousand in calendar week 21. Of these, 143,131 were recently evaluated as positive, a rate of 28.83 percent. This is also evident from data from the RKI. Compared to the previous week, fewer people tested positive for the Sars-CoV-2 coronavirus. The rate was previously 32.11 percent, and 218,299 of around 679.87 thousand tests were positive at the time.

The area most affected in Germany is Coesfeld. There have been 965.1 new cases per 100,000 inhabitants in the past seven days. The region with the fewest infections is Sömmerda, where the incidence is 21.7.

At least one new infection has been reported in all cities and counties across the country in the past seven days.

Data: hospitalization values ​​and situation in the intensive care units in Germany

The situation in hospitals has been an important indicator for assessing the pandemic since autumn 2021. In the past seven days, 2,300 people with a Covid infection have been hospitalized in Germany. The so-called hospitalization rate – the number of patients per 100,000 inhabitants of a region within a week – is currently 2.77. With a 28 percent increase in cases compared to the value of the previous week, the trend in hospitalization numbers is negative.

According to RKI calculations, the number of reproductions, also known as the R value, is currently 1.08. This means that an infected person infects more than one other person on average. The day before, the value was still 1.14.

If the R value is below 1.0, the number of new infections decreases. If the value is above 1.0, the virus is spreading more intensively. Larger regional incidents, such as the mass infection of workers in a slaughterhouse in the Gütersloh district in mid-June, have a strong influence on the R value. According to the RKI, the value can fluctuate relatively noticeably, especially if there are few new cases overall.

The RKI has recorded the following confirmed total numbers of infections and deaths in connection with the SARS-CoV-2 coronavirus for the individual federal states (as of 06/13/2022 at 0:00 a.m.):

The statistics show that older people are particularly at risk from the virus. But the virus has also been detected in children and adolescents. At the moment, the following data on infections in the different age groups has been recorded:

Various studies have now found that men are more susceptible to serious or even fatal consequences of Covid-19 disease. The RKI statistics currently record more female infected people in Germany. The following corona values ​​by gender have been recorded so far:

Graphics: All data on the corona pandemic in Germany

Below you will find various data visualizations of the officially reported figures for the corona epidemic in Germany.

For the following graphics on global distribution, we use data from the American Johns Hopkins University return. The University of Baltimore has been collecting data since the pandemic broke out earlier this year and is considered a reputable source for information on the spread of the virus worldwide.

The researchers at the university use figures from the World Health Organization (WHO), information from state authorities around the world, media reports and other sources return. This has resulted in what is probably the largest and most up-to-date database on the global development of the pandemic. The graphics update automatically at least once a day.

We have also explained here how we work with the data, what other data sources we use, how often the data is updated and why we are unfortunately unable to display some of the requested data.

In Germany, the Robert Koch Institute is the nationwide collection point for information on all confirmed infections with the corona virus.

The data is only updated once a day, always early in the morning, and records the electronically transmitted figures from the federal states. They reflect the registration status from the evening of the previous day. The information from the Robert Koch Institute and the local authorities therefore differ in how up-to-date they are, so that there may be discrepancies.

Is there a mistake? Mail us.

All current information about the spread of the corona virus can be found at any time in our live blog. Found an error in the graphics or the interactive map? Mail us.