Cultural heritage | The altarpiece of the church soon to be classified “historical Monument” in Tournon ? 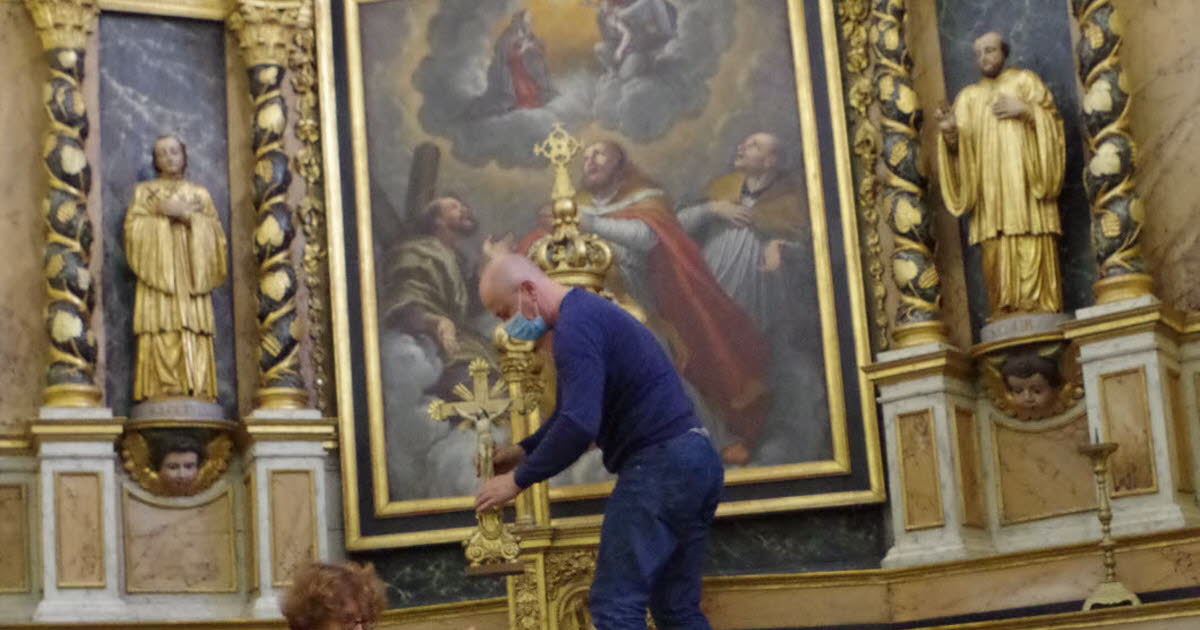 The work had started on 24 July 2019. So, it took almost a year (with a break during the confinement period), to restore this rare piece… An altarpiece so exceptional that its restoration allows elected officials of the City to continue the work for it to be classified as a “historical Monument”.

Started by the former municipal team, and these efforts will continue with the new mayor of the commune, Sandrine Berthet and his team. The two side altars are already registered and expect more than their ranking.

Gold leaf original which had retained in all their glory

Two teams worked on this restoration. For the altarpiece within the church and, at the same time, on the table of the high altar : an oil on canvas 2 meters high on to 1.66 meters wide, dating from the end of the XVIIe century, and whose author remains unknown. This “facelift” has allowed to trace the various stages of the life of this construction, which has known many vicissitudes. Dismantled at the end of the XVIIIe the altar-piece was then reassembled at the beginning of the XIXe century. Traces of old restorations were also found on the furniture like on the canvas. A table whose surface was very dirty, with even bird droppings. The paint was missing on some parts, and the canvas stretched showed buckling, to mention only these areas of intervention.

Same observation for the altarpiece, which has booked some nice surprises under the many layers of bronze paint superimposed over time : the gold leaf of the original were still intact, and had retained in all their glory.

It took all the expertise of the professionals, who have demonstrated a lot of patience and attention to detail to give the work all its brilliance. Remarkable piece, typical of the region.

Read Also:  They find bodies of missing brothers in Tarazá

This restoration is part of a substantive programme initiated by the municipality of Tournon in the field of heritage. It was conducted in association with the parish.

“The table of Saint-Trophime, Saint-André and Saint-Clair has been run on a design clever and neat”, states the report from the restoration workshop of lyon Vicat-Blanc. Last week, Antoine Bush, a specialist in the restoration of art objects and gilding, in charge of the work, was present at the side of the elected officials to put the final touch.

Away to sign an end, rather, it is the beginning of which we can speak. Two guided tours will be scheduled during the summer, between July 14 and August 15, in order to allow the greatest number to discover the secrets of this treasure nestled in the bosom of the church of Saint-Trophime, which dates back to the XIVe century.