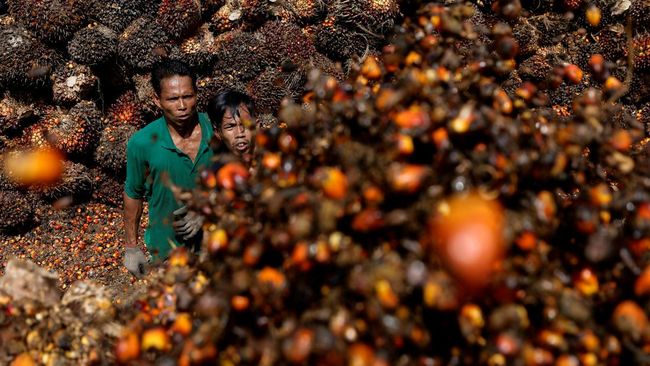 In fact, the price had experienced a sharp correction last week. Last week, CPO prices fell sharply as much as 9.91% and became the worst weekly correction since the second week of March.

This could be triggered by a sell-off by market participants because the price of CPO had soared and touched a record high on Friday (29/4), which is the last day before the Eid holiday.

Meanwhile, referring to Refinitiv data, this morning’s CPO price was MYR 6,469 per tonne or a slight increase of 0.83%.

Wang Tao, Reuters Commodity Analyst, predicts that the CPO price could end its decline to the support point in the range of MYR 6,190-6,290/ton and test the resistance at MYR 6,602/ton.

Thus, the price of CPO again touched its all-time high on Friday (29/5/2022) which was priced at MYR 7,104/ton. This level is also the highest weekly price increase since the first week of May 2021.

It is only natural that the policies of the Indonesian government can greatly influence the movement of CPO prices, because Indonesia is the largest producer and exporter of CPO in the world.

Meanwhile, Malaysia, which is the second largest producer of CPO in the world, seems to have benefited when Indonesia imposed a ban on CPO exports. Malaysia plans to take advantage of the global shortage of vegetable oil due to political tensions in Europe to regain market share, after the Malaysian CPO industry was accused of deforestation problems.

Malaysia’s Plantation Industry and Commodities Minister Zuraida Kamaruddin said his government did not want to waste this opportunity.

He also predicted that global vegetable oil prices are likely to remain high in the first half of 2022 and EU demand is expected to increase in the near term due to limited supply of sunflower oil and soybean oil.

This is in line with market participants’ expectations that the supply of CPO will explode. At the end of April, Malaysian CPO inventories are expected to rise 5.2% compared to the previous month to 1.55 million tonnes, according to the consensus compiled by Reuters.

CPO production in April is estimated at 1.48 million tons and is the highest figure since five months. However, the export value fell 5.6% to 1.2 million tons.

Not only that, Data ITS (cargo surveyor company), announced that Malaysia’s CPO exports jumped 67% in the period 1-5 May when compared to the same period the previous month.