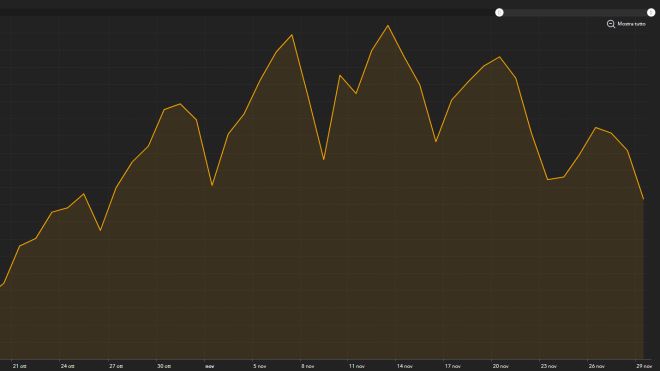 And the budget of the dead doctors during the pandemic in Italy. There are 221 victims among the white coats: to the ‘fallen list’ published by the National Federation of Medical Surgeons and Dentists (Fnomceo) are added Bartolomeo Borgialli, a retired family doctor, and Vito Roberto De Giorgi, an anesthetist also in pension.

In these hours, we also discuss and discuss about Christmas dpcm: among the measures envisaged, restrictions on travel between regions and a preservation of the curfew.

Hydroxychloroquine, the alt of Ema: “Suicide risk and psychiatric disorders”

The table with all the data

Veneto records 2003 Covid contagion in the last 24 hours, for an overall figure that reaches 145,592 infected since the beginning of the epidemic. This is a much lower figure than the daily reports of recent weeks, which could however be affected by the lower number of tests processed over the weekend. The number of deaths also rises: they are 34 the victims more than yesterday, for a total of 3,711 deaths (including hospitals and retirement homes). Currently positive subjects are 80,665 (+954). The pressure on hospitals still rises: Covid patients in the medical area are now 2,608 (+26), those in intensive care 339 (+8).

In Lazio i there are 1,589 new cases, while the deaths are 39. The currently positive are 90,201, of which 3,384 are hospitalized, in addition to 350 patients in intensive care and 86,467 in home isolation. Since the beginning of the epidemic, there are a total of 27,212 healed, 2,367 deaths and the total number of cases examined is equal to 119,780. The ratio between positives and swabs is below 8%: it is the lowest figure in November and for the first time Rome city drops below a thousand cases (947).

They are registered in Abruzzo 556 new infections. The budget of deceased patients records 7 new cases and rises to 893 (aged between 71 and 89, 2 in the province of L’Aquila, 4 in the province of Teramo and 1 in the province of Chieti). Since the start of the Coronavirus emergency, a total of 411,685 tests have been performed (+4,184 compared to yesterday).

I’m 282 positive swabs out of the 2,119 analyzed in Basilicata between last Saturday and yesterday: this was announced by the regional task force. For the past two days, they’ve signed up 11 dead (the total has reached 150). 134 people have been healed, bringing the general total to 1,730. The currently positive Lucanians are 6,006 and those in home isolation are 5,832. 174 people are hospitalized in the hospital, 22 of whom in intensive care (12 in Potenza and ten in Matera).

I’m 252 cases of positivity among the new diagnoses in Market on the last day. The most significant number of cases was registered in the province of Pesaro Urbino (131); followed by the provinces of Ancona (80), Macerata (17) Fermo (8), Ascoli Piceno (7); nine cases concern people from outside the region. Among the infected there are 36 symptomatic subjects.

One death and 183 new cases in South Tyrol. However, the laboratories of the provincial health authority only carried out 1,002 swabs. The number of hospitalizations is essentially stable: there are 278 patients in normal hospital wards, 150 in private clinics and 37 in intensive care. 8,495 people are in home isolation. The total number of people subjected to quarantine so far touches the threshold of 60,000 (59,785).

Hunting for new apartments to live or invest

which tools are essential to train the body

Kickers trainer Schiele: The level has to get even better

Seven points ahead for Juventus

Like George Floyd: they accuse the police of killing a man on the street in Argentina by suffocation | International