Coronavirus, in France over 20 thousand infections in 24 hours. Madrid, new state of emergency 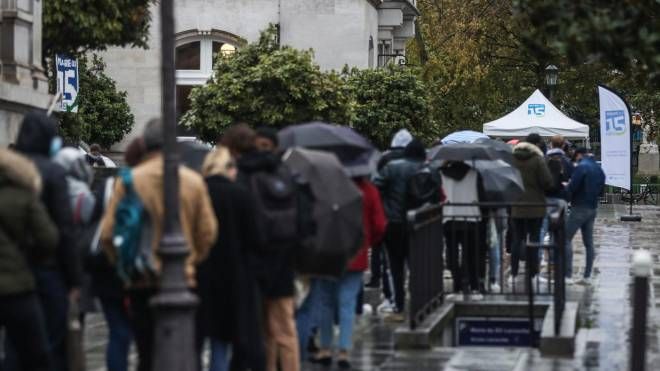 Rome, 9 October 2020 – The second wave of Coronavirus in world. L’WHO (World Health Organization) updates yet another contagion record: according to this report, global infections have now gone beyond 350.000. Europe is among the engines of the surge in infections (96,996 new cases). In the last 24 hours there have been 5,514 deaths, bringing the total to over 1.05 million victims. While according to a report by Reuters the contagion grows in 54 countries. And it is precisely theEurope to have to deal in the first place with Covid: even today the France records a new record with over 20 thousand positive, while yesterday they were more than 18 thousand. Great Britain has passed the 17 thousand mark.

Coronavirus Italy, the bulletin of 9 October

France is the European country most affected by Coronavitus. Today a new record of covid infections has been established: in just 24 hours 20,339 almost, thus exceeded for the first time the threshold of 20,000. The number of deaths was 62. The test positivity rate, which has arrived al 10,4%.

Things are also bad in Germany. For the second consecutive day, over 4 thousand new cases were registered in 24 hours, marking an increase of about 500 infections compared to the data provided yesterday. In fact, the Robert Koch institute announced today that there were 4,516 positive test results, while on Thursday there were 4,058. In Germany there have not been such high numbers since late March, early April. Compared to yesterday there are also 11 more deaths. Germany will adopt further restrictive measures in case the coronavirus infection curve does not stabilize. Chancellor Angela Merkel said this in the aftermath of the record of infections in the country since April, over 4,000. Merkel and the mayors of the eleven largest cities in Germany have agreed to take anti-coronavirus measures stricter if the infections exceed a threshold of 50 cases out of 100,000 per week. The measures could include stricter rules on mask use, as well as restrictions on private meetings and the purchase of alcohol, Merkel said today, adding that her main priority is to avoid shutting down society and the economy as in the lockdown. spring.

In Russia 12,126 new cases of Covid-19 were recorded in 24 hours: this is the highest number of infections in a single day since the beginning of the epidemic
and therefore exceeds the previous peak of 11,656 daily cases reached on 11 May. A total of 1,272,238 infections were recorded in Russia, while, according to official data, 22,257 people died of the disease, of which 201 in the last 24 hours.

After the sentence that repealed the restrictive measures adopted for Madrid in the face of the increase in coronavirus cases (and with the opposition of the regional authorities), the Spanish government has adopted a new state of emergency in the Autonomous Community (region) of Madrid. The socialist premier Pedro Sanchez had presented the governor, Isabel Diaz Ayuso (from the right of the Partido Popular) with three possibilities: that it was the regional government to impose an ordinance with similar measures; alternatively, that Madrid ask the government to impose a state of emergency; or that it was the winter that intervened unilaterally.

Holland is also on the alert: in the last 24 hours recorded 6 thousand new cases of contagion. In the last seven days, there have been about 34 thousand infections, with an increase in hospitalized patients. The prime minister Mark Rutte: “We are among the three most affected countries in Europe and it is worse than in the United States.” The premier did not rule out the adoption of new drastic measures if the situation does not improve in the next 72 hours. The cities where the infections spread the fastest are Rotterdam, The Hague, Utrecht and Amsterdam.

The number of Italian regions inserted by Switzerland (which marks 1,487 new cases) in the list of countries and areas at high risk of coronavirus contagion: in addition to Liguria, the Federal Office of Public Health today added Campania, Sardinia and Veneto. The updated list, which will be valid from 12 October, includes a total of 61 countries and 28 regions. Anyone returning to Switzerland from these areas must quarantine themselves on their return.

Coronavirus cases in the United States have exceeded 7.6 million: this is what emerges from the counts of Johns Hopkins University. According to the American university, the infections in the country are currently 7,603,746, inclusi 212.716 decessthe. According to the American media, the cases will exceed 8 million by next Thursday, when Joe Biden will answer the questions of the voters instead of the debate with Trump. Meanwhile, the federal health agency for health protection (CDC) has predicted that the country’s death toll could rise to 233,000 by the end of this month.

The Poland reported a record increase in coronavirus cases for the fourth consecutive day today, with 4,739 new infections reported. From tomorrow, wearing masks outdoors will be mandatory throughout the country and a tightening of measures in schools should also be announced.

The Brazil recorded 729 new deaths and 27,750 infections in the last 24 hours, bringing the total number of deaths to nearly 150,000 and the number of infected to over five million.

How to Get Free Electricity Tokens November 2020 via www.pln.co.id and WhatsApp All pages

In Latvia, stocks of ‘Remdesivir’ used to treat severe Covid-19 patients have run out