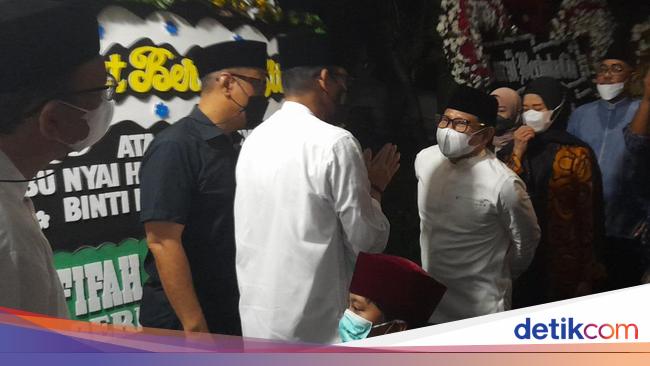 Chairman of the PKB Muhaimin Iskandar or Cak Imin pays homage to the deceased’s funeral home Lily Khodijah Wahid. Besides Cak Imin, several names such as Sandiaga Uno were also present at the funeral home.

In the eyes of Cak Imin, the late Lily Khodijah was a strong and principled woman. He also called the younger brother of the 4th President of the Republic of Indonesia as the successor to the elders.

“It’s common in our family, from ancient times between Mbah Wahab and Mbah Bisri different views, but still one goal. Therefore, Mrs. Lily’s picture is a continuation of the figures of our elders,” he added.

Cak Imin also briefly talked about the planned meeting which was canceled for some reason with the late Lily Khadijah.

“I also made calls, then made an appointment to meet during Ramadan, only at that time I was out of town and then it was delayed. Then I wanted to get close to Eid, he was already in the hospital, I couldn’t see him anymore,” said Cak Imin.

“I am sure he is Husnul Khotimah, he is a good person. He has principles, has attitude, has no fear. I have fear, he does not have the slightest fear, that must be learned,” he added.

Met at the same place, Minister of Tourism and Creative Economy (Menparekraf) Sandiaga Uno also expressed his deep condolences. For him, the late Lily was a mentor and an activist who was close to all walks of life.

“On behalf of the Ministry of Tourism and Creative Economy, Father of Creative Economy and of course on behalf of the government, we are deeply saddened by the loss. Mrs. Lily is an activist who is close to all circles. She also strongly encourages entrepreneurship. We are very lost, of course,” said Sandiaga Uno at the funeral home.

He had known the late Lily Khadijah for a long time. Since he was still at HIPMI, ahead of the Jakarta Governor’s Contest until the nomination for President of the Republic of Indonesia.

“I last ate with him and he left a message that when in 2019 I was participating in the democratic contest, he encouraged and encouraged issues related to integrity. That a leader must have integrity,” said Sandiaga.

“So our relationship is indeed good, more so as mentors and students. Hopefully this is his example in maintaining diversity, and Gusdur’s thoughts can be passed on to the next generation,” he added.