Carlos Gimeno maintains the leadership in the MAPFRE Tennis League 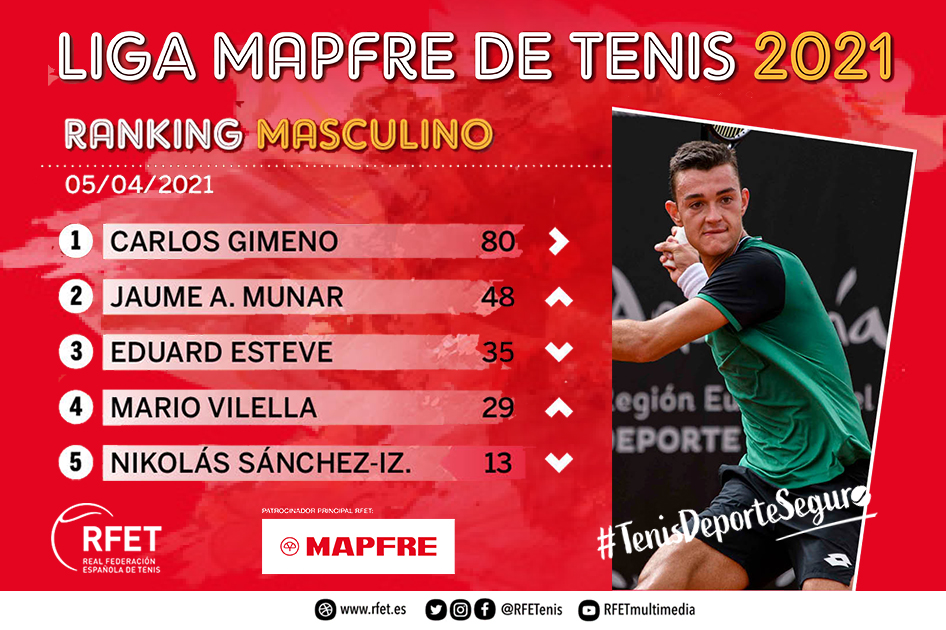 Despite being eliminated in the first round of the ATP Challenger in Marbella, the 19-year-old Valencian Carlos Gimeno retains this week the lead in the Men’s Ranking of the MAPFRE Tennis League 2021 with 80 points thanks to his victory in the previous tournament played in Gran Canaria.

The Balearic Jaume Antoni Munar, finalist this week in Marbella, who rises to second place with 48 points, surpasses Eduard Esteve from Tarragona, who stands with 35 points, is approaching him in the classification.

The next scoring tournament for the 2021 MAPFRE Tennis League will be the ATP Challenger to be held at the CD Open Tennis Ciudad de Pozoblanco, in Cordoba, from July 19 to 25.

Before that, the first scoring tournament for the Women’s Ranking of the MAPFRE Tennis League will be played: the ITF World Tennis Tour of 60 thousand dollars from the La Bisbal Tennis Club Sports Center, in Girona, from May 10th to 16th.

In search of the best Spaniards in the challengers

After the success of last year, the MAPFRE Tennis League returns in 2021 with a renewed format in search of the best Spanish tennis players in the male and female challengers played in Spain, tournaments in categories between $ 50,000 and $ 80,000.

If the objective of last year was to help Spanish tennis players in their return to competition after the break due to the COVID-19 pandemic, the Royal Spanish Tennis Federation (RFET) now wants to support and give visibility to the players who transit in the second division of world tennis in its leap to the ATP and WTA circuits.