Bruce Willis’ late work on DVD: Someone has to take responsibility for it – culture 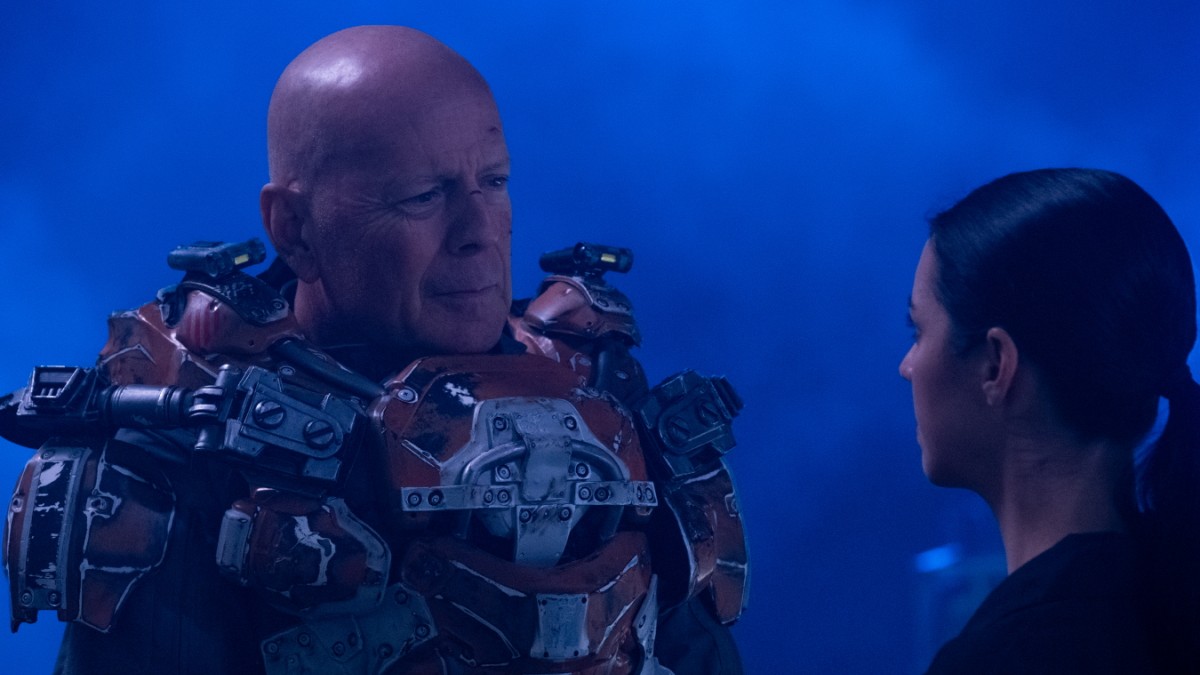 The man who wiped out 70 million rebels in one fell swoop on a distant colony in space stands at a bar somewhere in North America and drinks whiskey. Of course he only did his duty and saved humanity, minus the 70 million individuals annihilated by a quantum bomb who had rebelled against the rest of the so-called alliance. The planetary genocide has cost the man his career as a general; but the remorse is evidently nothing that cannot be washed down with a few glasses of whiskey.

Next to the ex-military, known to everyone by the nickname “The Blood General”, is one of his former soldiers. “The world needs you,” the soldier whispers to him. “The world needs something,” the blood general whispers back. “But she made it clear that what she needs is not me.”

It’s the year 2524, but the general’s pessimistic statement also seems to apply to our present, which produced this B-movie called “Cosmic Sin”, and to the actor who embodies the butcher of the galaxy: Bruce Willis.

He had his breakthrough in 1988 in “Die Hard – Die Hard”, with the role of the taciturn, laconic, self-reliant John McClane, who freed a skyscraper from terrorists. Also in his later great successes in the nineties, Willis did much of the necessary dirty work, as a time traveler (“12 Monkeys”), asteroid sprinkler (“Armageddon”) or indispensable helper in the fight against evil (“The Fifth Element”) – always in the service of all of humanity.

What is not understood is presumably hostile and should be destroyed

Meanwhile, however, Willis’ fame has faded and the role of the bald, white, always ready-to-fire cis-man has fallen into disrepute. Today the aging star shoots and beats himself through interchangeable B-movies, of which “Cosmic Sin” by Edward John Drake and “Hard Kill” by Matt Eskandari are being released on DVD and Blu-ray in Germany these days. Two direct-to-video films among countless others that you have never heard of and will never hear again, that you see and instantly forget. What does the world today need? Certainly not such films anymore. Certainly not another Blood General. Certainly not another Bruce Willis. Or?

In “Hard Kill”, which in terms of its title is not much different from “Die Hard”, Willis fights a terrorist in an apocalypse frenzy. He wants to get into possession of a quantum AI, whose password is kept by Willis’ character. The film is the monotonous, film-turned version of a shooter game in which two opposing mercenary teams take out each other in an old factory hall. Willis has more of a supporting role, only serving as a “decoy” to attract the bad guys. When asked “Why Willis?” one can only answer here: Because even in today’s overly complex world it obviously needs someone who explains in a few words to a “preacher” who quotes “Canterbury Tales” that he is just a dumb terrorist ass despite all the cunning chatter.

In “Cosmic Sin” future humanity (or rather the future form of the USA, to be more precise) needs the general with genocide experience for a more existential reason: The first contact with an unknown, apparently hostile alien species is more likely went bad, now it’s: “us or them”. So the military asks the blood general to accompany a team that will commit the cosmic but indispensable sin of wiping out an entire civilization with another quantum bomb. So he puts on a clattering spaceman sheet metal suit and travels to strange worlds to take up the fight. The good old paranoia of the West: What is not understood is probably hostile and should be destroyed; Negotiations are just as out of place here as with terrorist asses that Chaucer read.

The film has soaked up this paranoia with the last pore, it is really trash, but the role of the blood general is more ambivalent. He knows very well that he is on the wrong side of history and that people “are no longer looked at in the same way as before”. So Willis makes his blood general the guilty conscience of the film and the white civilization to which he belongs and whose sins he repeats: Whoever throws a quantum bomb once will do it again.

As an actor, one must first be able to afford this moral pragmatism. With Willis, the old myths and beliefs of the past continue to rotate in these B-movies, of the men, the whites, the Americans, whom he fulfills in his roles and with whom he is nevertheless not to be equated: he accompanies them today, from film to film, as a supporting character.

Because just as he continues to shoot, the beliefs and ideologemes perpetuated in these films will not simply disappear from our world, even if their time is long up. As long as the actor with the furrowed, ironic face is still turning, there will at least be someone who will stand up for the past in front of the camera – and apologize. That’s why it needs Willis, it needs his sacrifice. And for the remorse that remains, there is whiskey.