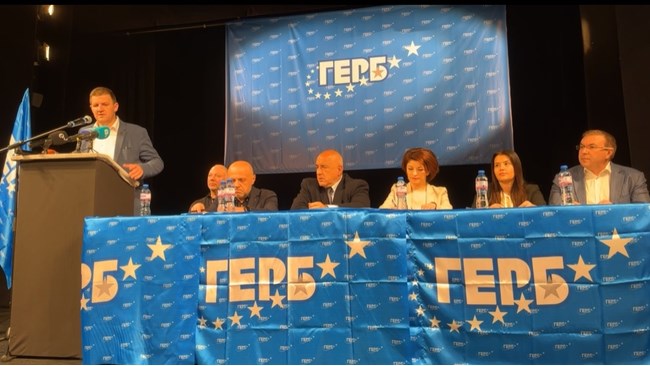 There are only winners in this hall. A woman asked me who voted for “We continue the change.” I thought, because I don’t see any. Do you remember how we lined up during the pandemic and you applauded the Bulgarian doctors. , our leader called me to his office, our leader Borisov called me and said that we should give more money to
doctors. Now, since April 1, they have taken this money, “said former Health Minister Prof. Kostadin Angelov.

In addition to living in a country of treason, we live in a country of state fraud by Prime Minister Kiril Petkov. He does not know with whom he signed the so-called letter. And it was supposedly signed at the insistence of the American embassy and the American government. They denied it. Asen Vassilev is lying. Just Kiro and just Assen not only lie to the state, but already threaten the national security of Bulgaria. Yesterday, the caretaker Prime Minister in question allowed himself to endanger the lives of Bulgarian officers by announcing a live Bulgarian intelligence operation in Mariupol to rescue our sailors. Kiro, you have recently become a Bulgarian.

The services are special and their operations are special, so that no amateur like you can come out and announce their actions, “said Desislava Atanasova from the rostrum. You reminded that there were no wiretaps during the GERB rule.

According to Delyan Dobrev, the first disadvantage was that the treasury was empty. Cabinet encroaches on “fiscal reserve of BGN 4.3 billion” He asked where the others went
money.

“Sometimes absurdities happen. For example, the leader of the largest opposition party is in custody. Another bigger absurdity is that Kiril Petkov is prime minister. There are parties that if they stop hating someone, they will fall apart. We we are not such a party. They will collapse from their own insistence. Our task is to stay together, “Tomislav Donchev urged.

“They are unscrupulous, vile. Yesterday Petkov said how a prime minister can be a trican. And I ask how they spoke to me. We are in Haskovo and you broadcast Just Nasko. Let’s wish someone came in and did a drug test They have exceptional media comfort. Someone like ours went to a disco in Pernik and asked “Is this a private fight or can we get involved,” said Boyko Borissov from the rostrum.

“I have never had a house outside Bankya, no bars, no money. But this whole set, funded by the mutts in Bulgaria, has come against me. They are robbing you. For my opponents, what is my biggest sin – we have launched brand new transmission lines and We have connected Bulgaria with Romania and Greece, and now if you have BGN 2 billion in a company and you withdraw it, they will say that it is some hundreds of millions. that I did not sell the pipes. 1 year we do not rule and we are still to blame, and their father Rumen Radev is not guilty. Only in one area they are better – theft. And they behave like scumbags. “Slavi Trifonov said that it was not time for elections. And he made them to the core. The people like him. Tomorrow he will go to a concert, he does not want to leave the government without honor,” the former prime minister commented angrily.

And he continued: Because of Kiril and Asen that they do not release the money of the Ministry of Regional Development and Public Works, people are dying on the roads. “Thrace” is outrageous
condition. And “Maritsa” has not been cleaned for 1 year. Why did we accept the inhouse procedure? First they said they would do 4
highways per year. One meter did not do, 1 tablespoon is not poured now.The greatest sin of
Rumen Radev is that he divided the people. Everything is crashing right now and there is no escape. I was glad to wear it
responsibility for those who lead. I say it without any malice. We left it full last year
fiscal reserve. They took them and now what are they doing – Borisov gave BGN 50, I give BGN 70. Her interest
the loans are repaid. If I were prime minister and finance minister failed a deal – how Asen Vassilev for
another Monday he took out a loan, he would have left by evening. He shouts that there were 12 police officers
d. Those from “Yes Bulgaria” seeing how the recovery plan is made for several companies. Ursula
von der Layen said about the deal with the batteries. Why? Because the Financial Times wrote it. Now they call that
Ukraine is bothering them, “Borissov said.