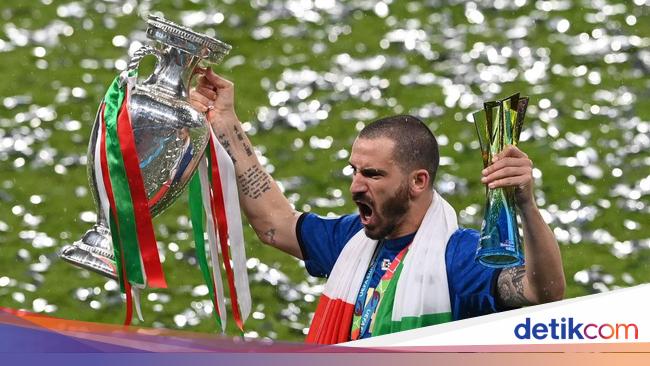 Leonardo Bonucci looks so excited to celebrate success Italy be a champion Euro 2020 at Wembley Stadium. Bonucci was sparked by the attitude of the England fans.

Italy wins Euro 2020 after defeating England in the final which was held at Wembley Stadium, Monday (12/7/2021) early morning WIB. The Azzurri won on penalties with a score of 3-2 after a 1-1 draw until extra time.

Bonucci was one of the players who most passionately celebrated Italy’s success. The 34-year-old defender shouted ‘It’s coming to Rome!’ in front of the camera and in the dressing room.

Bonucci also had time to shout ‘you have to eat pasta, eat more pasta’ while celebrating with Giorgio Chiellini before the award ceremony. “Eat more pasta” in Italian is an expression that means ‘get more experience’ and is often used in sports and football.

Leonardo Bonucci claimed to be motivated by the actions of British fans who cheered the Italian national anthem.

“They were cheering on the national anthem, they thought they had brought it home,” Bonucci told Radio RAI 1 as reported Football Italia.

“This, for me and the parents there (Giorgio Chiellini) even adds to our motivation. A personal satisfaction for me and Giorgio, who don’t always get the praise they deserve,” said the Juventus defender.

“This is dedicated to those who left us in this 1.5 years. Among so many champions, as was done for (Davide) Astori, I want to give a special dedication to Paolo Rossi, an extraordinary person,” said Bonucci.

“This trophy is for him and the Italian people who have suffered,” said Bonucci.